With budget season in full swing: Five things to know about the state of Pa.’s finances

With a budget deadline looming for Gov. Tom Wolf and the General Assembly, Pennsylvania’s fiscal watchdog is reporting a healthy revenue projection for the next fiscal year.

The Independent Fiscal Office, a nonpartisan agency that prepares revenue projections and analyzes economic trends for lawmakers, says the state’s economy performed “about as expected” in 2018.

That means that the state’s gross revenue product, wage growth, and job growth all aligned closely with the office’s projections, its director, Matthew Knittel, said Monday.

The office predicts that Pennsylvania’s general fund revenues will grow at a rate of almost 3 percent in the 2019-20 fiscal year, to a total of $35.8 billion. Wolf’s proposed budget comes with a price tag of $34.1 billion.

Even though June’s budget talks are fast approaching, Knittel largely stayed away the topic during his Monday presentation.

Here are five takeaways from his office’s latest report.

Pennsylvania saw large revenue gains in 2018-19, but not all will continue next year

A new tax on internet sales and growing corporate profits meant that Pennsylvania’s revenues in 2018 were better than the state expected. But not all of the revenue drivers are here to stay.

For instance, the state got a one-time windfall in 2018 from a gaming expansion, which won’t repeat this year.

That approach, known as income shifting, is legal, Knittel said. But it also means that revenue levels are “artificially high.”

“Those are temporary monies that won’t move forward into future years,” Knittel said.

Wages remain stubbornly stagnant — and nobody really knows why

Unemployment in Pennsylvania hit a 50-year low in March, when the U.S. Department of Labor reported a 3.8 percent joblessness rate for the state. The civilian labor force is also growing, and the state created 62,500 new jobs in 2018, according to the IFO.

These conditions have created what economists call a “tight” labor market — one where there are more jobs than there are laborers. This usually puts pressure on employers to raise wages to entice prospective hires.

But wage growth has remained at a relatively low 4 percent in Pennsylvania for the last two years. Nationally, wages grew by 2.9 percent between September 2017 and September 2018, a figure that drops to just .6 percent when adjusted for inflation.

The sluggish wage growth, which tracks with national trends, “has caught economists and others by surprise,” Knittel said.

“You would have thought the very tight labor market would have translated a year or two ago into higher wage gains,” he said. “I don’t think we have a satisfactory answer for why that isn’t occurring.”

His office previously predicted that Wolf’s proposal for a $12 per hour minimum wage, effective in July, would create a collective net income boost of $3.5 billion, while the state would lose 34,000 low-wage jobs. 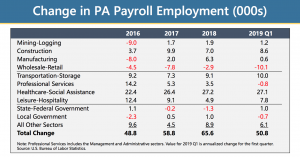 The 62,500 jobs that Pennsylvania gained in 2018 aren’t distributed evenly across all of its industries.

The hospitality industry is also expected to gain 8,000 new jobs in 2019, most of them in the low-wage food-service sector, Knittel said.

Pennsylvania’s transportation and storage sector is also booming, largely due to the expansion of the e-commerce and shipping industries. However, that growth comes at the expense of the retail industry, which is on track to bleed 10,000 jobs in 2019 as brick and mortar stores close their doors.

Other contracting industries include local government, which is on track to lose 700 jobs across Pennsylvania in 2019. The IFO also predicts that up to 800 “professional services” jobs — those for attorneys, architects, and accountants — could disappear this year.

Pennsylvania started taxing internet sales in March 2018. So far, the policy has been a huge boon for the state’s revenues.

The new source of tax revenue was a major driver in the state’s better-than-projected revenue collections for the 2018-19 fiscal year. Tax revenue has grown by about 6 percent this year, compared to 5 percent in the 2017-18 fiscal year.

The policy has been lucrative due, in part, to the rapidly expanding e-commerce industry. It’s also replacing some revenue from brick-and-mortar retail stores, which are closing their doors and eliminating jobs as the industry contracts.

But Knittel said that consumers also have more discretionary income to spend, thanks to 2018 Tax Cuts and Jobs Act that cut taxes and put more money in some Americans’ pockets. While some of the revenue gains in 2018 were one-time aberrations, Knittel said Monday that the robust earnings from internet sales tax will continue to be an important source of revenue for the state.

The labor market should stay strong next year, but national and international factors could create volatility

The IFO is predicting that Pennsylvania will see 3.5 percent tax revenue growth in the 2019-20 fiscal year. While job growth will continue, Knittel doesn’t think it’ll be as rapid as it has been for the past two years. Job growth and corporate profits are also expected to decelerate this year.

Overall, Knittel said that international issues are looming much larger than usual, with talks of trade wars with China and ramping tensions with Iran. He also expects some slowdown in 2020, since businesses and investors to be cautious in election years.

With budget season in full swing: Five things to know about the state of Pa.’s finances

by Elizabeth Hardison, Pennsylvania Capital-Star
May 21, 2019