The decades-long decline of manufacturing jobs in Pa. | The Numbers Racket

A new report by Smartest Dollar, a financial and consumer advocate website, found that Pennsylvania’s manufacturing jobs have declined by more than 33 percent in the past two decades.

The report found that employment in manufacturing jobs has been on the decline since 1979, according to the U.S. Bureau of Labor and Statistics data.

While manufacturing made up 13 percent of the nation’s nonfarm workforce in 1999, by 2019 that number was at just 8.5 percent.

Manufacturing’s share of the workforce may be down, but manufacturing output has increased due to advancements in technology and overall efficiency, the report noted. 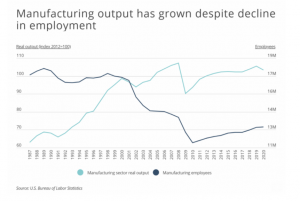 Over the last 20 years, growth has more than tripled in the computer and electronics subsector of manufacturing. Meanwhile, the apparel and leather goods subsector has faced steep declines with a percent change of more than -50 percent.

Some Pennsylvania-centric data from the report:

How Pennsylvania compares to the rest of the nation:

The decades-long decline of manufacturing jobs in Pa. | The Numbers Racket