The high court’s ruling in Janus v. AFSCME (or more often, “The Janus Decision” for the Illinois public employee who was the plaintiff in the case) overturned a precedent that let public sector unions collect union dues from all employees in a workplace, even those who opted not to join the union.

Unions had previously argued that the fees were necessary as all workers benefited from a collective bargaining agreement. But in a 5-4 ruling, the conservative-leaning court found that so-called “fair share fees” violated the right to free association from the U.S. Constitution.

Pennsylvania House Republicans are now trying to set some of the changes in stone.

The House Labor and Industry Committee advanced a bill that mandates public sector unions inform new workplace hires that they do not need to join or pay dues to the shop’s union.

“This bill just let’s [workers] know what their rights are,” Klunk said.

Still, Democrats tried unsuccessful to turn the tables with an amendment that instead made it easier for employees to form unions under state law.

Typically, forming a union requires two separate votes in a workplace. First, a workplace must have a card check, that shows at least 30 percent of workers have agreed to form a union by publicly signing union cards. If a majority sign the cards, than a company can agree to voluntarily recognize the union.

If the company does not recognize the union from a majority, or a majority do not sign cards, than the workplace holds a secret ballot, where a simple majority decides on representation.

The language, also introduced as a standalone bill from Rep. Maureen Madden, D-Monroe, would let a majority card check suffice.

The attempt was stopped in party line procedural vote, leaving Democrats with no options.

“While I’m hopeful there are bills we can agree on, this is just not one,” the panel’s ranking Democrat, Rep. Pat Harkins, of Erie, said.

The bill’s advance was celebrated by the Commonwealth Foundation, a conservative, Harrisburg-based think-tank, which cited a recently filed lawsuit against the liquor store employees’ union for violating labor laws.

“Union leaders are not going to accurately inform government workers of their rights,” foundation CEO Nathan Benefield said in a statement.

At least one major public employees union, the Pennsylvania State Education Association, is already abiding by the new Janus guidelines.

A spokesman, Chris Lilienthal, said that the union, which represents teachers,  is not allowing non-members to pay dues.

The union still opposes the bill, however, calling it “unnecessary” and “redundant.”

“The bill focuses only on informing public employees about their right to not join a union and excludes any notice of the employee’s right to join a union,” Lilienthal said in an email. “Withholding that information prevents an employee from making a fully informed decision.”

“The commonwealth has implemented changes to comply with the Supreme Court ruling,” Abbott said in an email. “Governor Wolf opposes any effort that discourages or seeks to hinder the ability of employees to come together and advocate for their collective rights.” 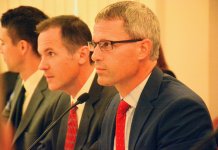