A majority of Pennsylvania voters strongly or somewhat support Gov. Tom Wolf’s call to raise the minimum wage to $12 an hour, a new poll from Franklin & Marshall College shows.

According to the survey, 47 percent of those polled “strongly favor” raising the state’s base wage to that amount, while 22 percent “somewhat favor” the action. Fifteen percent of those surveyed somewhat oppose the move, and 14 percent strongly oppose it.

In his latest budget proposal, Wolf proposed raising Pennsylvania’s minimum wage from $7.25 to $12 an hour on July 1. That number would gradually rise to $15 an hour by 2025.

The proposal has been embraced by Wolf’s fellow Democrats, but Republican leadership in the General Assembly has rebuffed similar calls in the past.

Last year, House Speaker Mike Turzai, R-Allegheny, told KDKA Newsradio in Pittsburgh he opposed raising the minimum wage because of projected job losses and the “devastating effects” the increase had caused in Seattle.

A new analysis by the Independent Fiscal Office (IFO) estimates that 34,000 jobs would be lost if Pennsylvania raises its minimum wage to $12 in July, a similar finding to previous reports.

But the report also takes care to stress that “Pennsylvania does not resemble Seattle, or other large cities, that have recently enacted large minimum wage increases”:

The Seattle labor market grew very rapidly during the phase-in to the $13.00 minimum wage, and that impact is difficult to separate from the impact of a higher minimum wage. Moreover, a much larger geographic region (such as a state) should generally be less sensitive to wage changes. However, rural areas and small employers will be more sensitive to higher wages. The IFO expects that rural areas would experience stronger negative employment effects than urban areas due to a higher Kaitz index and a lower cost of living.

The IFO, which provides economic analysis and revenue projections to the Legislature, crafted the report by applying a $12 minimum wage to employment numbers for 2018.

Researchers found the increase would directly affect 1.11 million part- and full-time workers. The analysis looked at both primary and secondary jobs.

More than half of those affected employees work part-time — 641,000 compared to 470,000 full-time workers — and the majority are women.

All in all, “roughly 1.08 million payroll jobs would receive a higher wage,” according to the IFO, and wages for these workers would collectively rise $3.5 billion.

Mark Price, an economist with the left-leaning Keystone Research Center in Harrisburg, praised this year’s report as “much more robust” than previous iterations. But he does disagree with the IFO’s conclusions on elasticity, or how many jobs would be lost.

There’s no question that the cost of higher wages must be absorbed, he said. The question is how.

“That’s been the matter of some dispute,” he said.

The IFO does not state an opinion, one way or the other, in its report about what Pennsylvania should do.

“Similar to other policy changes, policymakers face tradeoffs from a higher minimum wage,” the IFO states in its report. “There will be many who benefit from the change, but a smaller group will be adversely impacted too. Policymakers will need to decide whether the projected gains outweigh the drawback.”

To Price, the “risk is pretty small” when comparing 34,000 lost jobs to almost 2 million directly and indirectly affected workers.

The IFO also projects benefits for the economy, as low-wage workers have more money to spend; increased General Fund revenues to the tune of $50 million a year; and cost savings for businesses “through an increase in worker productivity and reduced labor turnover.”

Alex Halper, director of government affairs for the Pennsylvania Chamber of Business and Industry, sees the risk differently.

“Anytime lawmakers are considering a policy, even if there are going to be many people who benefit,” he said, “if implementing those policies means some people will lose their jobs or some small business owners will have to close up shop, you really hope it gives them pause.”

Halper said he is concerned raising the minimum wage would make it “much more difficult for young Pennsylvanians to find a job.”

“More difficult entry into the labor market for inexperienced workers, especially part-time high school and college students” is among the potential downsides identified by the IFO.

The IFO’s report briefly touches on Wolf’s proposal to gradually raise the minimum wage to $15 an hour.

“There is no research available on states that have raised the minimum wage to that level, so it is not possible to assess the potential implications for Pennsylvania,” the report states.

But he did signal that Republicans would be willing to discuss a “modest increase.”

“I think most people understand there’s a need there,” he said at a Pennsylvania Press Club luncheon in February, “[but] it’s a matter of arriving at a number that the governor and Senate Democrats can agree on.”

House Majority Leader Bryan Cutler, R-Lancaster, “has said on more than one occasion any discussion about minimum wage cannot just focus on the very bottom of the pay scale,” spokesperson Mike Straub said. “Our caucus goal is to help those on the bottom of the pay scale move up the economic ladder, and many of our members are open to adjusting the minimum wage if they believe it is in the best interest of helping as many Pennsylvanians as possible.”

‘As big a challenge our country has ever faced’: COVID-19 forces census officials to get creative 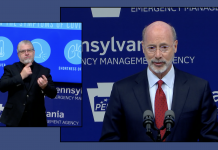 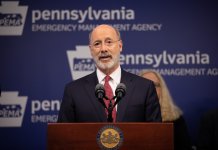 ‘As big a challenge our country has ever faced’: COVID-19 forces...