PHILADELPHIA — State Rep. Kevin Boyle has introduced legislation that would allow each municipality to set its own minimum wage, as long as that wage is greater than the current state minimum wage.

“What it would mean if passed, is that places with higher costs of living like Philadelphia are able to raise their minimum wage to a level where we have fewer people who are working full time that are still under the poverty line,” the Northeast Philly Democrat said.

Pennsylvania’s minimum wage has not changed since 2006; it sits at the federal minimum of $7.25 per hour.

“We need to acknowledge the incredible sacrifice that minimum wage workers — many of them are essential workers — have paid in response to COVID-19,” Boyle said. “We need to address this absolute injustice that our minimum wage is this low.”

African-American and Latino workers comprise a disproportionate number of workers who earn less than $15 per hour, according to a report from the National Employment Law Project.

“We need to acknowledge that this unjust policy is having a disproportionate negative impact in communities of color,” Boyle said.

Boyle’s legislation, House Bill 2659, would repeal state preemption laws that prevent municipalities from passing ordinances that are more stringent than state laws. The bill has 47 co-sponsors and is currently under review by the House Labor & Industry Committee.

Boyle said his proposal addresses criticism from Republican lawmakers and chambers of commerce that the cost of living is lower in some parts of Pennsylvania and raising the minimum wage in those parts of the state would lead to businesses cutting jobs.

“I don’t agree with that analysis by the detractors of the minimum wage increase but nonetheless this proposal would accommodate that concern,” Boyle said.

Boyle’s legislation has the support of several local organizations, including The Partnership for Working Families, Pennsylvania United and POWER.

“The minimum wage hasn’t been raised in over a decade and it will be great for local towns, municipalities and counties to respond to the needs of their own constituents,” said Jordan Ford, a community organizer with POWER.

“We are here in unprecedented times. At a time like this like this, we need all types of economic efforts to put money back in our constituents’ hands.”

Raising the minimum wage will move families out of poverty, Ford said.

“It will help people make ends meet, especially those essential workers that are still working right now and allow us to have a more robust economy,” he said. “At the end of the day, we’re not talking about statistics. We’re talking about real people’s lives.”

Gov. Tom Wolf has repeatedly proposed minimum wage increases, but efforts have stalled in Republican-led legislature. His most recent proposal called for an increase to $12, with further increases to $15 by 2024.

“A big Republican issue all over the country is to preempt cities from making legislation that would do things like raise the minimum wage,” said John Dodds, director of the Philadelphia Unemployment Project.

He says a statewide coalition has been working to encourage Republicans to take action to raise wages, but they have “no interest” in helping working people, low income people.

“Boyle is doing a good thing with his bill,” Dodds said. “I wish him luck. I’m just at a loss as to how you move this through a Republican legislature.”

Some holiday alternatives | Five for Your Weekend 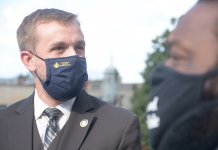 Immigration advocates push Biden to not only bring back DACA but...