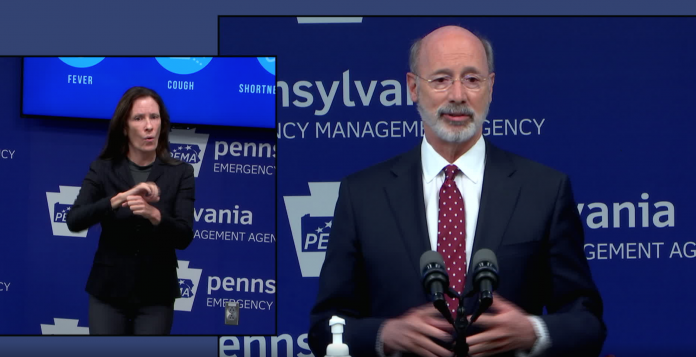 Businesses and public offices in two dozen counties in northern Pennsylvania will be permitted to slowly reopen starting May 8, Gov. Tom Wolf announced Friday, with stay-at-home orders lifted, but restrictions on large gatherings and other precautions still in place.

Wolf’s announcement marks his first move to loosen mandatory social distancing policies since he issued a state-wide stay-at-home order on April 1 to slow the spread of COVID-19.

However, Wolf also stressed that the progress is tenuous. A new outbreak of COVID-19 in any county could put its residents back under a stay-at-home order.

Stay at home orders will no longer be in place in 24 of the state’s least populous counties, which are home to just 1.6 million of Pennsylvania’s 12.8 million residents.

They include Potter, Tioga and Bradford counties in north-central Pennsylvania and Erie, Mercer and Lawrence counties in the northwest.

Centre County, home to the main campus of Pennsylvania State University, is also on the list. The university moved its 40,000 undergraduates to online learning this spring.

Retail stores may reopen in those counties if the establishments follow federal social distancing and cleaning standards.

But gatherings of more than 25 people are forbidden, while most entertainment and personal care businesses — from theaters and organized sports to hair salons and gyms — must remain closed.

Restaurants and bars are still limited to take out and delivery, while telework is encouraged. Government offices will also reopen. But Wolf said they will follow the same social distancing guidelines as private businesses.

All the counties that are reopening are in what his administration has termed a “yellow” phase. The rest of the state remains in a “red zone” under stay-at-home orders.

To date, no counties have been designated as a “green zone,” a status that would let them lift aggressive mitigation efforts.

Counties can advance through the three-tier system if they have low per-capita case counts; the ability to conduct contact-tracing and testing; and appropriate population density to contain community spread, the administration said.

State officials will continue to monitor those metrics going forward to look for new outbreaks. If the coronavirus makes a resurgence, Wolf said he was prepared to again shut down businesses and lay down a stay-at-home order.

Pennsylvanians living in counties in the yellow phase should continue to observe social distancing, Wolf said, so they can move “forward into the green phase, not backwards into the red phrase.”

Wolf did not offer specific guidance for Pennsylvanians who may have to travel across county lines for work or leisure.

The administration is also using a model, developed by Pittsburgh’s Carnegie Mellon University, that will analyze factors such as the number of COVID cases per capita, medical capacity, population density, the number of residents aged 60-plus and the “re-opening contact risk” — such as the number of workers employed in a currently closed industry sector.

The standards aren’t ironclad. Reporters from Pittsburgh pointed out that Allegheny County, home to the Steel City, had already met the state’s reopening standards. Health secretary Dr. Rachel Levine said that, due the county’s density, the state was being cautious and keeping the area closed.

The continued closure of the southwest despite positive metrics led the region’s lawmakers, from such Republicans as House Speaker Mike Turzai, R-Allegheny, to rural Democratic Rep. Joe Petracra, of Westmoreland County, to ask for prompt reconsideration.

“It’s simply not fair to lump our more rural counties in with urban ones,” Petrarca said in a statement.

Wolf did not say if he had a timeline for reopening the rest of the state. However, the southwestern counties as well as counties in the southcentral parts of the state would likely open next, he said.

Much ado about testing

To decide which counties will stay at red or advance to yellow, Wolf and Levine also announced plans to expand their public health resources.

Since his first hint of reopenings, Wolf, echoing national public health experts, has said that widespread testing will be key to prevent a new surge of infections as parts of the state reopen.

After weeks of prodding from lawmakers and the press, Levine on Friday finally offered a benchmark of what the regimen would look like, when she announced that the state aimed to test at least 256,000 people a month to identify COVID-19 patients and encourage them to self-quarantine.

That means the state will have to rapidly accelerate the rate at which it conducted tests in the first two months of the pandemic. The state has tested just 1.77 percent of its population — more than 227,000 people — since Pennsylvania reported its first case of the disease on March 6, according to the latest Health Department figures.

Testing capacity has expanded since the outbreak began, albeit inconsistently. Health Department data show the state’s testing rate reached a peak in early April, then slowed for two consecutive weeks before rebounding again at the end of the month.

Based on the last seven days of testing, when health officials collected test results for 41,000 Pennsylvanians, it would take the state just over six weeks to meet its monthly goal.

Levine on Friday also offered some broad outlines of the state’s plan for contact tracing — a public health strategy for identifying and contacting people who were potentially exposed to a disease.

Levine said Pennsylvania’s effort will rely on the work of community health nurses, who are charged with locating COVID-19 patients and identifying their potential contacts.

But as the investigative news site Spotlight PA reported last month, the ranks of public health nurses in Pennsylvania have been decimated by decades of funding cuts.

Levine said the state will augment its contact tracing workforce with volunteers and local health officials as more counties are permitted to reopen businesses and public spaces. But she declined to say how many workers would be needed or how much the program would cost.

“When we need to hire people, we will hire them to make sure that the case investigations and the contact tracing moves forward,” Levine said Friday.

State officials were also unable to say how much it would cost to expand testing, even though they’re facing mounting pressure from the Legislature to affix budgets to their public health programs.

The House this week passed a bipartisan proposal requiring Wolf to provide the General Assembly with a testing plan — one that would prioritize healthcare workers, from hospitals to nursing homes, and include a price tag.

Wolf told reporters Thursday he opposed the bill because it posed “hurdles” for his administration. But House Majority Leader Bryan Cutler, R-Lancaster, said the Legislature needed details so it could appropriate money from a federal stimulus package to the testing effort.

“We’re 55 days into a pandemic and I have yet to see a testing plan, even though we’re reopening in eight days,” Cutler said. “And I find that very troubling.”

Once more into the breach, a new session brings a new bill to shrink the Legislature | Friday Morning Coffee

Judicial remap amendment is on hold – for now. The risk remains | Mark O’Keefe

by Stephen Caruso, Pennsylvania Capital-Star
May 1, 2020

Judicial remap amendment is on hold – for now. The risk...