Donovan Sterling West, the president of the African American Chamber of Commerce of Pennsylvania, New Jersey and Delaware, cast doubt on a report this year that found less than 3% of all businesses in the region are Black-owned.

“I don’t agree with those numbers … It screams out that something’s off,” said West, who took over the 400-member organization in October.

The figures stemmed from Pew Charitable Trusts’ annual “State of the City” report, which revealed that Black-owned firms accounted for a mere 1 in 40 businesses in the region, or 2.5 percent. Its findings were based on the most recent U.S. Census data from 2016.

Whites accounted for the largest share of business ownership in the region at 76%, followed by Asians at 10.8%, and Latinos claimed 2.2% of the businesses. The census surveyed 112,000 businesses where the agency could determine ownership and included the less racially diverse collar communities around Philadelphia.

While the Pew report used the most recent census figures, it did not include businesses with no paid employees, said Larry Eichel, project director of The Pew Charitable Trusts’ Philadelphia research initiative who worked on the report, in an email.

African Americans tend to have businesses with no employees or payrolls, which could include caterers, daycare providers, construction workers, subcontractors, and those in the gig economy.

When these sole proprietors are taken into account, the total estimated number of Black businesses in Philadelphia was 25.1 percent, outpacing the national average (9.3 percent), according to the latest census data from 2012, which the city also uses.

The figure still doesn’t match up with city demographics, where Blacks are 44 percent of the population, whites are 34 percent, Latinos are 15 percent, and Asians are 8 percent.

Sylvie Gallier Howard, Philadelphia’s first deputy commerce director, said even those census figures that show Black-owned firms account for 1 in 4 business were limited and dated. So the administration is working to capture its own data on business owners in the city.

Last month, the city partnered with United Way of Greater Philadelphia and Southern New Jersey, and PIDC to create a comprehensive study of the city’s business landscape, with a focus on the resources available to business owners who are people of color, immigrants and women.

“We know that those entrepreneurs disproportionately face barriers,” Howard said.

The report, expected to be released in the latter half of 2020, will help city officials understand the needs of those business owners and create policy goals toward inclusive growth.

Wilson said the approximately 500 Black-owned firms that passed through Temple’s program last year were typically smaller operations, involving few employees or run by a single individual. Those limitations can prevent them from networking or from tapping into local programs to grow and maintain their businesses.

“They’re not working 8 to 5. They’re working practically 24/7,” she said. “Sometimes it’s harder for them to get out and network.”

“What you’re going to be when you grow up has to also include some level of entrepreneurship. Period,” he said. 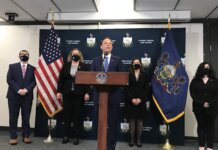