‘This cannot go on’: Activists call for floor vote on bill banning gifts for lawmakers

(*This story was updated at 1:25 p.m. on Wednesday, 2/9/22 with comment from House Majority Leader Kerry Benninghoff)

Anti-corruption advocates are promising to track House Majority Leader Kerry Benninghoff, R-Centre, across the commonwealth in the coming weeks to pressure him to call a vote on a bill that would ban legislators from accepting gifts.

“We will see you wherever you are,” March on Harrisburg activist Michael Pollack told about two dozen supporters outside Benninghoff’s Capitol office Wednesday. “There’s no rest for the wicked and there’s no hiding corruption.”

Under state law, lawmakers can take unlimited gifts and hospitality — such as meals and free trips — from those who hope to influence or flatter them. Pollack says this is legalized bribery.

Opponents of the gift ban are normally quiet, but argue too strict a ban could prevent a lawmaker from accepting small but meaningful offerings, such as a bottle of water on a hot day or a t-shirt from a youth sports team.

Opponents also point to the current law, which requires lawmakers to report if their yearly total of gifts exceed $250 and hospitality exceed $650.

But those reporting standards appear loose, Pollack noted. According to a 2019 report prepared by a House committee, lobbyists reported giving $1.5 million in gifts, meals and trips to lawmakers in 2018.

But just about $40,000 of those perks were reported by legislators on ethics forms. That’s less than 3 cents of every dollar spent to curry lawmakers’ favor.

Even if the reporting system was reformed, “if we see you doing something wrong, it doesn’t make it right,” Pollack told supporters, as lobbyists and lawmakers looked on with a mix of bemused or jeering expressions.

Pollack and March on Harrisburg have been active for years pressuring the Legislature to act, staging sit-ins and raining dollar bills onto the House floor. While a gift ban bill has passed out of committee last session and this session, neither have reached a full floor vote, let alone the governor’s desk.

Pollack said that activists waited in Benninghoff’s Capitol office for five hours last Thursday, and three hours yesterday, hoping to get a word in with the leader. So far, Pollack said, they’ve only engaged with staff on the issue.

Then, Wednesday morning, they attempted to approach him at a Harrisburg fundraiser, but Benninghoff again refused to engage, so they went back to his office.

Police gathered outside of his office around 10:15 a.m., but in the end, Pollack and two other protesters left peacefully, and without an arrest.

“We are still hopeful that Majority Leader Benninghoff will not use state violence on Pennsylvanians’ protesting,” Pollack said.

A gift ban bill, sponsored by state Rep. Aaron Kaufer, R-Luzerne, is awaiting a floor vote in the House, but Benninghoff, who controls the voting calendar, hasn’t called up a vote yet.

After most of the protesters dispersed, Benninghoff left his office flanked by two Capitol Police officers. Pollack yelled “pass the gift ban” after Benninghoff, who looked straight ahead as he walked past.

Reached for comment, Benninghoff told the Capital-Star that he did not have comment right now. “We have other things to do,” he added. 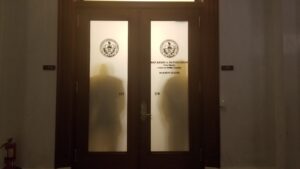 Benninghoff’s spokesperson, Jason Gottesman, did not immediately respond to a request for comment. In December, he told the Capital-Star that “we’re committed to doing stuff” but called the gift ban “a work in progress.”

The bill in front of the House has a loophole that lawmakers could still accept unlimited gifts from groups not registered to lobby the General Assembly.

If the bill were to pass the House, it would face an uncertain fate in the Senate. Senate President Pro Tempore Jake Corman, R-Centre, has taken a muddled stance on a gift ban, and has been subject to his own protests by March on Harrisburg in recent weeks.

‘This cannot go on’: Activists call for floor vote on bill banning gifts for lawmakers