A view from the balcony. (Capital-Star Photo by Cassie Miller)

On Friday, the Capitol paid tribute to the Pennsylvania survivors of the Japanese attack on Pearl Harbor 78 years ago on Dec. 7, 1941.

Three survivors of the attack were in attendance at the Capitol’s East Wing Rotunda as retired and active duty service men and women remember the 2,403 lives lost on that day.

Capt. Preston Gill, commanding officer at Naval Support Activity in Mechanicsburg opened the ceremony and introduced the survivors in attendance.

Chief Jimenez, senior enlisted leader of Naval Operations Support Center – Harrisburg, read a special message from the Gov. Tom Wolf. Wolf remarked on the importance of the day and the need to remember the bravery of those involved.

The ceremony concluded with the singing of Amazing Grace followed by Taps. 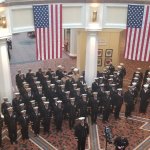 A view from the balcony. (Capital-Star Photo by Cassie Miller) 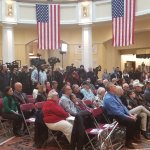 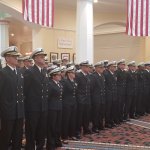 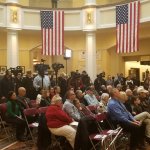 A crowd assembled at the Capitol to remember the Pearl Harbor attack. (Capital-Star Photo by Cassie Miller) 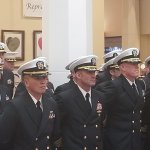 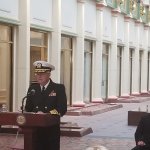 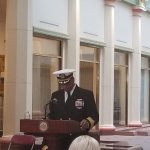 Transgender and gender diverse teens: How to talk to and… by Capital-Star Guest Contributor November 14, 2021
Thirteen men died after going to the Allegheny County Jail.… by Special To The Capital-Star March 15, 2022
Capital-Star Q&A: Pa. Ag. Sect'y Russell Redding talks 2022… by Cassie Miller June 10, 2021