A Republican state senator from Lancaster County has introduced legislation that would prohibit abortion based on a diagnosis of Down syndrome, just one week after a similar measure passed through the state House.

A bill from state Sen. Scott Martin, R-Lancaster, would amend Pennsylvania’s criminal statute to prohibit doctors from performing abortions “sought solely” because a fetus is diagnosed in-utero with Down syndrome.

Martin introduced an identical bill in 2018, but it never advanced through the Judiciary Committee. Both bills closely mirror legislation introduced this year by Rep. Kate Klunk, R-York, which the House approved 117-76 on May 14.

Klunk’s proposal includes specific language creating exemptions from the law if the fetus was conceived by rape or incest, or if the mother is endangered by a medical emergency.

That language is absent from Martin’s bill. But in a memo he circulated in December, Martin said, “nothing in this proposal would interfere with the existing ability of a woman to obtain an abortion in cases of rape, incest or endangerment to the mother.”

Under both proposals, doctors who knowingly terminate pregnancies following a Down syndrome diagnosis could be charged with a third-degree felony.

The bills come amidst a nationwide flurry of state-level legislation to restrict abortion access. Alabama’s Republican governor signed the strictest abortion ban in the country last week, outlawing the procedure in almost all cases, without exceptions for rape or incest.

State legislatures in Ohio and Georgia passed their own new restrictions earlier this month.

In Pennsylvania, Democratic Gov. Tom Wolf has vowed to veto any abortion bans that come to his desk.

But that hasn’t stopped lawmakers from the GOP-controlled House and Senate from reintroducing them year after year.

The House approved a similar Down syndrome abortion ban in 2018, which did not create exceptions for cases of rape, incest, or medical emergency.

House Speaker Mike Turzai, R-Allegheny, tried to attach a similar proposal to a Senate bill the same year, after that chamber failed to vote on Martin’s companion bill.

Why do we celebrate Labor Day? When did it become a holiday? | Five for Your Weekend 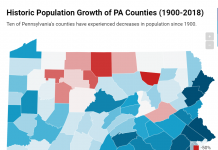 A century of population growth in Pa. explained by one map | The Numbers Racket

Pa. state senator introduces another bill to ban abortion based on Down syndrome diagnosis

by Elizabeth Hardison, Pennsylvania Capital-Star
May 21, 2019