Warming temperatures are wreaking havoc on civilizations across the globe. And it will get worse as human-caused climate change intensifies floods, acidifies oceans, and renders coastal areas uninhabitable due to rising sea levels.

Pennsylvania will feel these effects, but it will also be part of any solution, thanks to its status as a fossil fuel producer and manufacturing hub.

For the next two months, as a part of its ongoing #PennForward project, the Capital-Star will explore Pennsylvania’s role in climate change. We’ll specifically focus on the evidence-based practices the state can adopt to shrink its carbon footprint and protect its people and ecosystems from inevitable disruptions.

Here’s what you need to know to get started.

Carbon emissions 101: What they are and what causes them

At the root of global climate change is a single chemical element: carbon.

Carbon has always been in our air. Animals and plants trade oxygen for carbon dioxide in a cycle that enables life on Earth.

But as lifeforms die, millions of years of heat and pressure can transform their carbon-heavy remains into fossil fuels, such as coal, gas and oil.

These fossil fuels play an essential role in modern life. Humans extract them from the earth to fuel  our cars and airplanes, to create plastics, to power heavy industries and to generate electricity.

When humans burn them to make energy, these fuels emit billions of tons of carbon back into the atmosphere.

Carbon only makes up a tiny fraction of the earth’s atmosphere, where it plays an important role in trapping heat. But too much of it warms the planet.

The current concentration of carbon in the earth’s atmosphere is 407 parts per million — the highest it’s been in three million years, according to a report published this month by the National Oceanic and Atmospheric Administration, or NOAA.

The last time atmospheric carbon was this high, the globe was 2 to 3 degrees hotter and sea levels were 50 to 80 feet higher, NOAA also reports.

The changes we’re seeing now are because of just how fast humans have burned through fossil fuels. For the past 60 years, humans have added 100 times more carbon to the atmosphere than previous natural increases, NOAA said.

What’s Pennsylvania got to do with it?

For as long as America has needed fossil fuels, Pennsylvania has provided them.

The first oil well in America was drilled in northwestern Pennsylvania, while coal and natural gas are still plentiful in the state.

Where we are, where we’ve been: A look at Pennsylvania’s oil-rich history

The state’s long industrial tradition accounts for its history of high carbon emissions. Pennsylvania is the sixth-largest state in the country, but it’s the fourth-leading emitter of carbon dioxide, according to data from the federal Energy Information Administration.

All of the carbon emissions in Pennsylvania — including factories, cars, landfills and homes — released a collective 264 million metric tons of carbon into the atmosphere in 2016, according to the state Department of Environmental Protection’s most recent Greenhouse Gas Inventory.

The three biggest sources of emissions are, by far, industrial activity — such as making steel and cement — electricity production, and transportation.

Pennsylvania’s emissions have declined in recent years. The state has cut its carbon emissions by 22 percent since 2005, by phasing out coal-powered electricity, expanding wind and solar energy, and improved energy efficiency.

But globally, Pennsylvania remains a huge emitter. Its net greenhouse gas emissions collectively account for 1 percent of the global total, DEP has estimated.

That figure includes all of the carbon Pennsylvania emits, minus the carbon that’s absorbed by plants and soil.

If Pennsylvania’s 12.8 million residents formed their own country, the state’s collective carbon emissions would outstrip those of nations such as the Netherlands, with a population of 17 million, as well as the the Philippines and Nigeria, home to 105 million and 190 million people, respectively.

Pennsylvania won’t be spared as the planet warms.

In 2015, a state-mandated study conducted by Penn State University warned that climate change would worsen everything from air quality to storm damage to Lyme disease rates in the Keystone State over the next 40 years.

The state has already warmed by 1 degree celsius since 1900, the researchers found. They predict that Pennsylvania will be 3°C warmer by 2050, resulting in a climate that feels a lot like Maryland’s or Virginia’s does today.

But focusing on the effects in our backyard isn’t enough, said Donald Brown, a former international climate negotiator under President Bill Clinton and onetime DEP attorney.

Climate change is expected to create an international migrant crisis as island nations and coastal areas are wiped out by rising sea levels. According to Brown, that gives all governments a moral imperative to act now to mitigate damage.

“Every ton [of carbon] is hurting somebody,” Brown, now a professor at Widener University Commonwealth Law School in suburban Harrisburg, told the Capital-Star. “It is not only hurting you, but is increasing the damage around the world.”

How long do we have to take action?

The 2016 Paris Agreement called on nations to achieve net-zero global carbon emissions by 2060 to avert a 2-degree temperature increase in the next 80 years.

But few nations are meeting their Paris goals, according to the New York Times. And the countries that are on track only account for a small share of total carbon emissions — just 11 percent.

Emission declines in the United States reversed in 2018 — an unsustainable trend that could continue now that President Donald Trump has withdrawn the United States from the Paris agreement. Experts worry more countries could follow our example.

In the absence of an aggressive national strategy to reduce emissions, state and local governments across the U.S. are making their own plans to cut carbon from their energy grids, incentivize fuel efficient transportation, and safeguard their infrastructure from extreme weather.

What can Pennsylvania do?

There are a lot of options on the table, from Harrisburg and Washington D.C. to our own homes.

Advocates are calling on everyone to change their daily behaviors to reduce their carbon impacts, whether by carpooling to work, turning off lights, or eating less meat.

Nationally, progressive Democrats are lining up behind the Green New Deal, sponsored by U.S. Rep. Alexandria Ocasio-Cortez, D-N.Y., and U.S. Sen. Ed Markey, D-Mass., which seeks to wean the national economy off of fossil fuels in the next 10 years and create new jobs in renewable energy sectors.

Congressional Republicans, meanwhile, have proposed planting 1 trillion trees to soak up more carbon from the atmosphere.

At the state level, Gov. Tom Wolf has taken action to enter an interstate agreement, known as RGGI, to reduce emissions from electricity generation. The policy has had modest effects in other states but nonetheless drawn partisan opposition in Pennsylvania.

The General Assembly, meanwhile, is considering bills to expand access to solar panels and to promote electric vehicles.

There’s no silver bullet for climate action. But over the next eight weeks, the Capital-Star will look at what works, what doesn’t, and what isn’t considered when addressing the crisis in Pennsylvania. 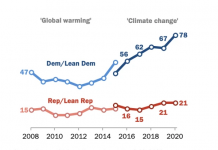 The partisan divide over climate change is as deep as ever, poll finds | The Numbers Racket 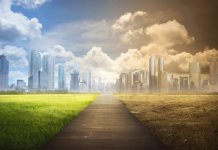 Pa. can show leadership in the new energy era — Without joining RGGI | Opinion