PHILADELPHIA — Local gun control advocates on Tuesday urged U.S. Sen. Pat Toomey, R-Pa., to take the lead on a background check measure wallowing in the U.S. Senate that they believe will close a loophole that permits unfit gun buyers from acquiring firearms through private sales.

“If he really wants to be a leader on this — he is negotiating with the president and he is talking with [U.S. Senate Majority Leader] Mitch McConnell — we just want him to stand up for the strongest bill possible,” Shira Goodman, executive director of CeaseFirePA, said. “We don’t think it’s time to move backwards, we think it’s time to move forward.”

Goodman was one of several representatives of various gun violence prevention organizations who gathered at The National Liberty Museum to prod the Pennsylvania senator to urge his colleagues to take action on the background checks bill sponsored by U.S. Sen. Christopher Murphy, D-Conn.

The bill is the Senate equivalent of a background checks bill approved by the U.S. House earlier this year.

Toomey did not attend Tuesday’s event.

In a statement, a spokesman for the Lehigh Valley Republican said that “No one in the U.S. Senate has worked harder than Senator Toomey to achieve a bipartisan consensus on expanding background checks to keep guns out of the hands of violent criminals and the dangerously mentally ill.

“Even now, while some engage in partisan antics, Senator Toomey is actively working with Democratic and Republican senators, President Trump, and gun safety groups in order to achieve an outcome,” the statement read.

According to published reports, Toomey has had several conversations with President Donald Trump about expanding background checks, the most recent coming a little more than a week ago.

Toomey told reporters that the president was “engaged and interested” in doing something on the issue, but that he had not endorsed Toomey’s proposal to expand background checks to all commercial gun purchases or any other ideas that have been put forth since the mass shootings in Dayton, Ohio, and El Paso, Texas, in July.

The gun-control activists who spoke in Philadelphia on Tuesday were concerned that the background checks bill that Toomey is co-sponsoring with U.S. Sen. Joe Manchin, D-W.Va., is filled with loopholes and doesn’t go as far as the House-passed bill.

They contend that while Toomey’s proposal, which failed to pass in the Senate by six votes, may ensure that those buying guns commercially over the internet or at gun shows would be subject to background checks, it leaves open a loophole that does nothing to prevent the sale of firearms between private sellers.

As an example, Goodman cited the mass shooting last month in Odessa, Texas, which left seven dead and 25 wounded.

The shooter in the incident used an AR-15 purchased in a private sale to carry out his rampage. Texas is one of 29 states that currently don’t require any screenings on guns purchased in private sales. Ator had been prevented from buying a firearm at a gun show in Texas on Jan. 14, 2014.

“Why would you not want to proceed with the strongest piece of legislation, one that closes these loopholes that Pennsylvanians and others are concerned about, and move forward,” Heeding God’s Call Executive Director Bryan Miller asked. “It is crucial for those in Washington to focus on the best piece of legislation available to them.”

He continued: “We want Pennsylvanians to know that the the Toomey-Manchin background check bill, was not only far less than advertised, but had damaging provisions that would have had a negative effect on gun trafficking and violence, especially a provision that would have removed a federal prohibition on purchasing handguns out of state.” 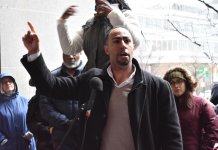