On April 20, 1999, Dan Frankel was just a few months into his freshman term as a Pennsylvania House lawmaker.

He had just arrived at the Press Club in Pittsburgh to talk about his priorities when he saw a breaking story on some TV monitors — there had been a shooting at Columbine High School in Colorado.

Frankel, a Democrat from the city’s Squirrel Hill neighborhood, paused as he remembered the moment during a Wednesday interview in his stately Capitol office, his eyes welling with tears.

“So I changed my remarks that day to talk about gun violence,” Frankel said.

He also expressed his frustration “that we didn’t make more progress at the federal level, understanding that we had an opportunity and, in my view, responsibility on the state level to do something.”

In 2018, two decades and 1,500 miles removed, a similar horror played out in Frankel’s own neighborhood.

On Oct. 27 last year, police say a gunman spouting anti-Semitic hate speech shot and killed 11 people inside the Tree of Life synagogue. Frankel, who is Jewish, was just two blocks away.

In the year since, Pennsylvania lawmakers have grappled with how to respond to mass shootings.

Democrats, including Frankel and Gov. Tom Wolf, have called on the Legislature to pass new gun measures, including extending background checks to the private sale of long-guns — including the type of semi-automatic rifle the Tree of Life shooter allegedly used.

Republicans who control the state House and Senate have has thus far rejected those ideas, instead calling for stronger mental health interventions.

Ahead of the Sunday anniversary, the Capital-Star spoke to Frankel about his home neighborhood, gun control, and what Pennsylvania can do to prevent another tragedy. The Q&A has been edited for clarity and length.

‘We will have to take on their shares’: Pennsylvania General Assembly remembers 11 victims of Tree of Life synagogue massacre

Q: For people who haven’t been to Squirrel Hill … how would you describe your neighborhood?

It’s a remarkable place. Many people have lived in the community for many years.

At the same time, there’s an increasing amount of diversity in the community. So while the Jewish community has [for at least the past 75 years] been centered in Squirrel Hill … it’s also become a community of college students, professionals, and very international.

If you go to the Jewish Community Center, which I belong to, and have belonged to forever, it has 14,000 members. You go into the locker room and you see every nationality, you hear all kinds of different languages being spoken there. So, it’s an evolving community that still retains its character as the center Jewish life in western Pennsylvania.

You really saw it flower that evening after the shootings — the murder of my 11 neighbors — in the streets of Squirrel Hill, in the Presbyterian church [where an interfaith vigil took place], at the corner of Forbes and Murray — just an outpouring of people from all over, all different faiths and races.

Q: So I went back through the legislative archives and looked at the bills that you were the prime sponsor on in 1999. I found seven about guns. So clearly that for you was a priority the second that you came through the doors. Can you talk about how you got there?

Well, it was always something, even when I ran for office initially, that I talked about. I was always politically active. I was a proud supporter of President Clinton and his efforts to get the Brady Bill [mandating federal background checks] done and totally disappointed when it was not renewed.

[During my first term, I] worked together with then–Rep. Dwight Evans, who is now in Congress and at that time was part of the Democratic leadership. He and I formed, what we called at that time, the Common Sense Gun Safety Caucus that we co-chaired, and we put together a portfolio of legislation that included things like mandatory loss or stolen reporting, one gun a month, an assault weapons ban.

It become very clear to me that we were running up against some very entrenched forces here and that many members were not willing to consider it. And our goal really was to at least get people on the record and get a vote.

As I say to people, we really, in my view, failed to do our job. Twenty years later, we haven’t got much to show for it, other than the fact that we were able to, actually in the weeks just prior to the Tree of Life shooting, get a meaningful piece of gun safety legislation passed, that dealt with removing weapons from the possession of people who were the subject of a Protection from Abuse order.

And that was a major victory, and one that would save hundreds of people’s lives in the commonwealth every year, in our view. So that gave me some hope that there may be a sense of things changing.

And then we had, literally within two weeks after, the murders at Tree of Life.

What I was not interested in initially, nor was anybody else, was trying to make political hay out of it. The community was grieving so much. It was so traumatic. Nobody wanted to really talk about politics and policy around it.

But subsequent to that, clearly as I went around my community, people would say to me, “What are you going to do? You need to do something about it.” And as I travel across the state of Pennsylvania, that same message comes to me [as co-chair of the bicameral Pa. SAFE Caucus].

Our goal is to really to move some of these issues forward. So there’s discussions now. We had a meeting in Philadelphia last week to talk about strategy. We met with our allies, the advocates. … We talked about how we’re going to move forward with legislation, what we ought to prioritize. So we’re debating that.

Some people want to go with the red flag bill, [which would allow the temporary confiscation of firearms from someone deemed a risk to himself or others]. Some of us want to prioritize the universal background check bill, to find another path to get something done.

There’s a lot to be done, but I think it’s baby steps. And we know when we look at polling that the public supports stronger gun laws in our state, and we want to want to make sure that we respond to that.

Q: I’ve been thinking about 1999 versus 2019. In 1999, I don’t know that many of us could have imagined the hate that would have blossomed from the internet, which was just sort of a novelty, or just how different a world we would be living in today. And, you know, looking at the bills and the metrics that you really believe in, that you haven’t been able to, for many reasons, get put into law for 20 years.

[What] propels you forward in the face of what happened last year, just the horrors, and also the difficulties of lawmaking?

I’ve gotten really schooled in how difficult lawmaking is.

You really need to engage people. … But there has to be a kernel of willingness of everybody to cooperate on it. … We haven’t gotten there quite yet on guns. But I think it’s inevitable.

I just think that public opinion has moved dramatically on this issue. And I think, you know, we see the so-called gun rights groups being stepped back on their heels quite a bit with respect to how they’re viewed in our community and their intransigence.

At one point, the NRA was supportive or at least neutral on passing universal background checks, and now they’ve dug in their heels. They are apoplectically opposed to the red flag bill, because they view it as gun confiscation. Other states are moving forward in all these areas and passing legislation. So we’ll see.

I mean, I think as we move to the 2020 election these are going to be issues that are going to be front and center in many federal and state races. So I think it’ll be really be interesting to see how that plays out. And it may take an election in order to to really create the capacity to get this done politically. 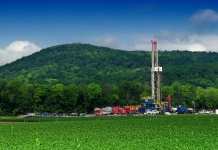