As supporters of projected presidential winner Joe Biden supporters took to the streets in celebration across the commonwealth Saturday, Harrisburg was instead visited by more than a thousand supporters of President Donald Trump.

The crowd, which included armed militia members and state lawmakers alike, argued without evidence that Trump was only losing due to voter fraud.

Around 11:30 a.m. Saturday, multiple news outlets predicted Biden would win Pennsylvania, giving the former vice president and Democrat more than the 270 electoral votes he needs to win the White House.

By noon, hundreds of Trump supporters were crammed onto the sidewalk outside the state Capitol, as a smaller number of Biden supporters celebrated on the steps to “The Cupid Shuffle.” Police kept the groups separated because the Biden group had secured a permit for that time.

Pro-Trump protests, led by an out-of-state activist, had been ongoing outside the Capitol since Thursday.

After about 45 minutes of trading chants and waving signs, the Trump supporters walked to the back of the Capitol to listen to speeches from campaign officials, varied supporters, and state lawmakers.

Supporters chanted that “Donald Trump won,” as well as “hold the line” when asked if they’d be ready to visit counties and take to the streets for the defeated president.

“Stand by. Be alert and be ready,” Rose Tennant, a leader of the Women for Trump group, said to cheers.

Tennant, a western Pennsylvania radio host, told the crowd to report any presumed voted fraud to the campaign, and to donate to the campaign’s legal fund — which also is authorized to pay down Trump’s accumulated campaign debt.

Heather Hollinger, 37, of Carlisle, Cumberland County, showed up Saturday with a stroller holding an old Halloween skeleton she fished from her closet. Clutched in the skeleton boney hands was an “I voted Biden” sign.

“I don’t think Biden can win without fraud,” Hollinger said. “But I can accept it. I wouldn’t be burning buildings.”

There is no evidence of fraud right now, which Hollinger acknowledged. But she thought a legal fight would reveal evidence that would turn the tide for the president.

In a brief press conference Saturday outside of Philadelphia, the Trump campaign refused to concede, citing ongoing legal challenges. Most are being tossed in federal court. 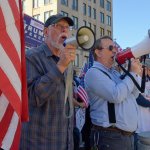 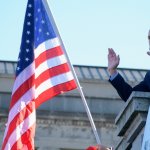 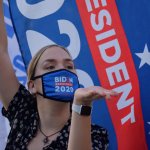 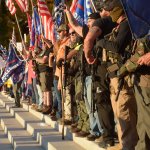 Armed Three Percent militia members and supporters of President Donald Trump stand outside the Pennsylvania state Capitol on Nov. 7, 2020 at a rally in support of his reelection. National news media called the race for his opponent, Joe Biden, earlier that day, (Capital-Star photo by Stephen Caruso) 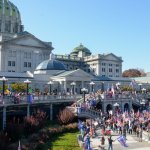 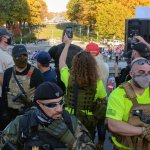 Armed Three Percent militia members stand by as their leader, Taylor Stevens, addresses a crowd of and supporters of President Donald Trump at the Pennsylvania state Capitol on Nov. 7, 2020, at a rally in support of his reelection. National news media called the race for his opponent, Joe Biden, earlier that day, (Capital-Star photo by Stephen Caruso)

“Ya know, if [Biden] wins fair and square, that’s okay. But if it’s by cheating, what do you say?” Mastriano asked the crowd.

“Hell no!” they answered.

He also called Pennsylvania Secretary of State Kathy Boockvar, whose office oversees elections in the commonwealth, a “partisan hack,”

“[Democrats] don’t want it secure and safe. They want to cheat in the election, and they will,” Mastriano added. “This is our time to rise up. If you love our country, it’s time to stand.”

“Those who lie and cheat and steal will be thrown in jail,” Mastriano concluded.

The crowd then began to chant “lock them up.”

Mastriano then mingled with rally attendees, but declined to take questions.

Later, a dozen armed members of a Three Percenter militia, a far right paramilitary group, arrived at the rally. Some were from Pennsylvania, but others were from as far away as Texas, such as Taylor Stevens, who addressed the crowd.

“All I knew there is there would be a lot of Trump supporters out here, and there was possibly going to be opposition,” Stevens said.

Afterwards, the Trump supporters, including the armed militia members circled back to the front of the Capitol, exchanging words with a small remaining cohort of Biden backers. The militia left around 5 p.m. Some Trump supporters thanked them for protecting the rally as they departed.

Why the Second Amendment protects a ‘ well-regulated'… by Capital-Star Guest Contributor June 17, 2021
A year after Jan. 6, attack on the U.S. Capitol lives on in… by Jacob Fischler March 5, 2022
A year after the Jan. 6 Capitol riot, election review and… by Marley Parish January 6, 2022