(*This story has been updated to correct data points shared by Rep. Brian Sims, D-Philadelphia)

Black people make up *12 percent of Pennsylvania’s population of about 12.8 million people. But they accounted for *49 percent of HIV diagnoses in 2018 — and to Rep. Brian Sims that’s “racist as hell.”

“A racist system produces a racist result. You don’t need to look at the data to know that,” Sims, D-Philadelphia, said Wednesday, adding, “If medicine only reaches people who look like me, in a state that doesn’t look like me, we’re doing something wrong.”

Sims, one of two openly gay House members, was one of several lawmakers and public health advocates who were on hand during a Capitol press conference Wednesday for the 21st annual observation of National Black HIV/AIDS Awareness Day in Pennsylvania.

With the cameras rolling, they urged a segment of the population disproportionately hit by the disease to get themselves tested and educated on how to treat it and live with it effectively.

“We like to think that the HIV/AIDS epidemic is over, but sadly that’s far from the truth,” Rep. Jake Wheatley, the Pittsburgh Democrat who’s organized the observance, said in a statement. “Today, more than 1 million Americans are living with HIV/AIDS, including more than 476,000 African-Americans.”

State Sen. Vincent Hughes, D-Philadelphia, said Pennsylvania and the nation have a come a long way since the early days of the epidemic in the early 1980s, when an HIV diagnosis amounted to a death sentence. Thanks to breakthroughs in research and medication, the disease is treatable and survivable, and, with early detection and dedication, effectively a chronic illness.

“We must do better for the health and well-being of our people,” Hughes said.

In Allegheny County, for instance, HIV diagnoses have declined by 39 percent in recent years, said Julia Och of AIDS Free Pittsburgh. AIDS diagnoses have similarly declined by 50 percent, she said. As of 2018, 2,965 people in Allegheny County were living with HIV. There were 85 new HIV cases and 28 new AIDS cases, the group said on its website, citing Pennsylvania Health Department data.

“It’s important for everyone to get tested,” the Health department’s secretary, Dr. Rachel Levine, said, adding that she witnessed the ravages of the disease firsthand as a young physician in New York City in the early 1980s.

To make sure that happens, public health experts are trying to make services as accessible and stigma-free as possible, said Jeannine Peterson, the CEO of Harrisburg’s Hamilton Health Center.

“We’re going out into the community to provide testing wherever we can,” she said. “We have to merge this with all other illnesses, where having HIV is like having diabetes.”

All the experts on hand Wednesday stressed the ease and accessibility of both testing and treatment. And as Wheatley pointed out, everyone — not just vulnerable populations — needed to get tested. To make that easier, the Pittsburgh lawmaker provided free HIV/AIDS screenings at the Capitol on Wednesday.

“If you are a sexually active citizen, this is for you,” he said. 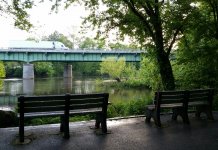 The pandemic has us all stuck in a rut. Remember to take time to look around | Anwar Curtis