Even though its final destination is likely the U.S. Supreme Court, a federal appeals court’s ruling Wednesday striking down the Obamacare insurance mandate will destabilize markets and perhaps lead some people to drop their coverage, Pennsylvania’s top insurance official warned Thursday.

“Healthcare in America should not come down to haves and have nots; left vs. right, or liberal vs. conservative,” Pennsylvania Insurance Commissioner Jessica K. Altman said. “This should not be a topic of political debate. People’s lives are literally on the line.”

The GOP attacks on the law are “a national embarrassment,” Altman said.  “We cannot and should not forget that the cost will be paid is a human one.”

In a 2-1 decision Wednesday, the U.S. Court of Appeals, for the 5th Circuit, based in New Orleans, struck down the so-called “individual mandate” in the 2009 Affordable Care Act, ruling that it was unconstitutional.

The three-judge panel remanded the case to a lower court, leaving in question whether other parts of the law, such as a ban on denying coverage to those with preexisting conditions; a Medicaid expansion, or a provision that allows young people, up to the age of 26, to stay on their parents’ policies, might also be at-risk.

Altman, and Washington State Insurance Commissioner Mike Kriedler, discussed the implications of the ruling, and the decision to remand it to a conservative judge in Texas, during a Thursday conference call put together by the Center for American Progress, a liberal advocacy group based in Washington D.C.

Topher Spiro, the center’s vice president of health policy, said the appellate court’s ruling was amounted to a “remand and delay” tactic that puts the law at further risk.

“This is not a good decision for the ACA. In many ways, it’s the worst possible decision,”  Spiro said. “The court could have used common sense and severed the individual mandate from the rest of the law. Instead, the court sent the case back to an extreme, right-wing judge who has made his intentions clear — to strike down as much of the ACA as possible.”

One possible result of the tactic: The composition of the Supreme Court could change, skewing further to the right, and increasing the likelihood that former President Barack Obama’s signature legislative achievement would be struck down entirely, the advocates warned.

In Pennsylvania, the law has helped bring the state’s uninsured rate, now 5.5 percent, below the national average of 8.5 percent in 2018. The national rate jumped for the first time in a decade between 2017 and 2018, when it was 7.9 percent, Vox reported in September. The number of uninsured people nationwide now stood at 27.5 million people, up from 25.6 million people in 2017, Vox further reported.

That spike was due, in no small part, by ongoing attacks on the law by the Trump White House and its legislative and ideological allies. According to Vox, while recent Census data showed only nominal decreases in private coverage, Medicaid coverage decreased by about 2 million.

In Pennsylvania, the number of people covered by Medicaid and the Children’s Health Insurance Program, rose by 584,465 people between 2013 and 2018, an increase of 43 percent, for a total of 2.97 million people, according to HealthInsurance.org, an independent data tracker.

Democratic Gov. Tom Wolf authorized the expansion shortly after being elected to his first term in 2015. His Republican predecessor, ex-Gov. Tom Corbett, declined the expansion and attempted to move the state onto a public-private hybrid that critics decried as more expensive and with fewer benefits.

Speaking to journalists on Thursday, the two state insurance officials warned that those coverage trends could reverse themselves. Altman decried Republicans on Capitol Hill and in the White House for failing to have a back-up plan in case the law is ever struck down.

‘The whole idea is peace of mind:’ Gov. Tom Wolf urges Pa. residents without insurance to get coverage

“The ACA banned cruel practices,” such as the ban on denials on preexisting conditions, she said. “Yet the Trump admin has repeatedly tried to stifle the ACA and go back to a system where these practices are commonplace.”

Legislative Democrats have spent much of the past month crisscrossing the state, holding events where they’ve encouraged people to enroll in coverage before the end of a recently concluded open enrollment period.

“Protecting the health care rights provided by the Affordable Care Act, is a cornerstone issue for the Pennsylvania Senate Democratic Caucus,” said Sen. Vincent Hughes, of Philadelphia, who’s the ranking Democrat on the Senate Appropriations Committee. “ … President Barack Obama’s signature policy victory has helped millions maintain or improve their quality of life through access to better health care. That should be applauded and expanded, and not under constant attacks from the right. We will not go backwards.”

In a statement issued by his office, Wolf said the Obamacare lawsuit brought by Republican attorneys general in several states “puts vital consumer protections and access to care at serious risk. We should be working in a bipartisan way to make coverage and prescription drugs more affordable.”

Despite the ruling, Altman was quick to stress Thursday that people who have coverage will continue to have it, whether through the Obamacare exchange or through the Medicaid expansion.

But until the case is finally settled, “the number one issue is going to be the heightened degree of uncertainty,” for patients and consumers. Washington’s Kriedler said. “We’re talking about people who are recovering or in active treatment for cancer or multiple sclerosis.

“It will be hanging over their heads that coverage will go away,” he continued. “In Washington, we’re looking at 1.1 million people under the age of 65 with a preexisting condition who are looking at losing their coverage.” A further 118,000 people stand to lose federal subsidies if the law is struck down, as are 600,000 Washingtonians covered through the Medicaid expansion, he said.

“The state would not have the capacity to pick up the lost federal financing,” he said, adding that “as insurance companies perceive risk, rates go up.”

The court case also “raises the stakes for 2020,” Spiro observed. “Whoever wins [the presidency] will hold the fate of the law,” in their hands. “The 2020 election is a clear referendum on the Affordable Care Act.

Health care workers from Pa., other states, using expired gear during pandemic and ‘hoping for the best’ 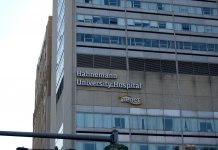 COVID-19 in Philly: City ends Hahnemann negotiations, will look for other sites

‘The perfect storm:’ How COVID-19 has multiplied the risk for children in abusive households

Coronavirus cases in every Philly ZIP code; city to use Liacouras...