In a doomsday scenario, Pennsylvania could lose $18.5 billion in transportation funding over the next 12 years.

That’s according to a state Department of Transportation advisory committee, which recently released a report on risks facing the commonwealth’s highway, bridge, and transit financials from the present until 2030.

Pennsylvania’s transportation budget faces threats both at the federal and state level, with many moving pieces and uncertainties. But one thing’s for sure — we’re already feeling the effects.

The Pennsylvania Turnpike Commission is required to pay the state Department of Transportation $450 million a year. But the toll-collection agency has stopped payments in the midst of a potentially catastrophic lawsuit over the practice.

Mass transit agencies in Harrisburg and Philadelphia say they’ve already pumped the brakes on some capital projects and would have to cut down to the essentials if the state loses that funding.

According to the report, the state needs approximately $2.5 billion more each year to adequately fund interstate highway and bridge needs. That number is $1.2 billion for public transit costs.

Jody Holton, chair of the Transportation Advisory Committee that put together the report, said while the plan paints a bleak picture, it’s also “progressive and responsible to be looking 12 years out.”

Pennsylvania needs to not just fill the gaps that exist today, but think about what the gaps will be moving forward, she said. To do that, it’s helpful to know which funding sources are in trouble.

“Without the proper amount of funding to maintain what we even have, it really stymies our ability to think about the future and to look at economic opportunities,” Holton said.

In 2018, groups that represent truck drivers and motorists sued the Pennsylvania Turnpike Commission over the transfer of toll revenue to special state funds for mass transit as well as bike, rail, and pedestrian projects.

Losing the suit “holds serious consequences for transit agencies across the state and the Amtrak service Pennsylvania subsidizes,” Richards said in testimony to the House Appropriations Committee.

The Public Transportation Trust Fund provides money to transit agencies for capital (think new buses and construction projects) and operation assistance. It accounts for 15 percent of Pennsylvania’s transportation budget, per the report.

The Multimodal Transportation Fund is a much smaller part of the budget — just 2 percent — but it provides much-needed money for local bus lanes, sidewalk reconstruction, road widening, and other projects.

Payments from the Turnpike Commission are on hold until the lawsuit is resolved, which could take years.

Richards told the Senate Appropriations Committee that PennDOT has been, for the most part, able to continue providing transit agencies with the money they expected.

“That will not be possible if we don’t receive payments by July 1st of this year,” she said.

Things could get much worse.

If the state loses the suit, the report projects a $2.2 billion funding shortfall between now and 2030. 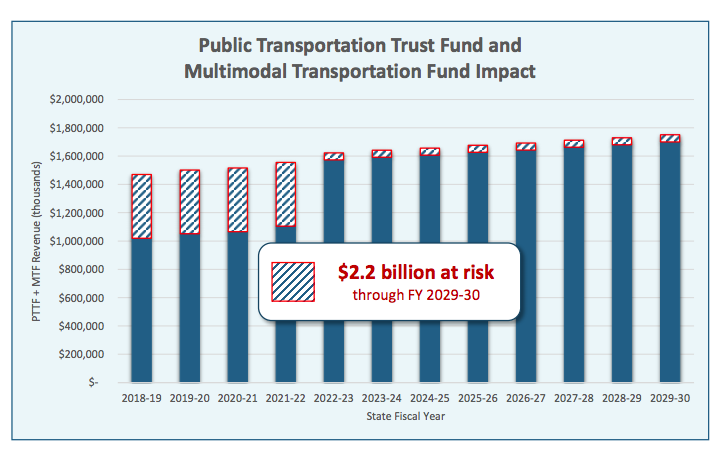 A big chunk of funding for the State Police currently comes from the Motor License Fund, which is earmarked for road and bridge improvements.

In 2016, the General Assembly capped the amount of money that can be pulled from the fund for the State Police. This was, for a change, good news for transportation funding.

But the report lays out a hypothetical in which the Legislature lifts the cap after it fails to come up with a new way to fund the State Police — a not completely unreasonable scenario considering the long-running debate over the subject.

That would mean $1.8 billion fewer dollars available through 2030, according to the report. 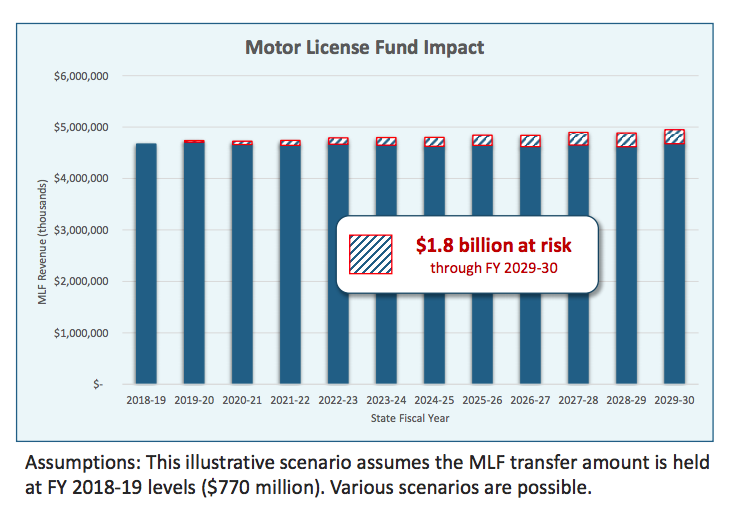 The decline of gas guzzlers

Fewer gas guzzlers on the road is a good thing for the climate, but it’s a bad thing for transportation funding as it’s currently designed.

The Motor License Fund is primarily funded by the Liquid Fuels Tax, whose revenues could fall as a result of the above trends.

“A fairly conservative scenario with gradual adoption of alternative fuel vehicles could reduce revenues into the Motor License Fund by a cumulative $4.9 billion through” 2030, per the report.

In the current fiscal year, which ends July 1, Pennsylvania received $2.17 billion from this federal fund for highways, bridges, and transit.

The Highway Trust Fund announced in 2008, at the height of the Recession, it was out of money. Since then, Congress has bailed it out with billions from the general fund.

But that cash infusion is running out, and revenue primarily from the gas tax will fall behind spending by 2022, the Committee for a Responsible Federal Budget projects.

If that happens, Pennsylvania could lose $6 billion in federal funding until 2030.

This risk scenario has a medium likelihood of occurring. Crises have been averted since 2008 by transfers from the General Fund to the Highway Trust Fund totaling $140 billion. This short-term solution may be used again. However, the inadequacy of federal gas tax revenues to fully fund the Highway Trust Fund creates a level of uncertainty in sustaining the fund into the future. The federal gas tax was last increased in 1993 and is not indexed to inflation.

Carroll said he’s “somewhat hopeful the federal government will do their duty and govern,” especially as the Highway Trust Fund affects all 50 states. There are a few proposals to fix the problem on the table, according to Roll Call, including raising the gas tax. 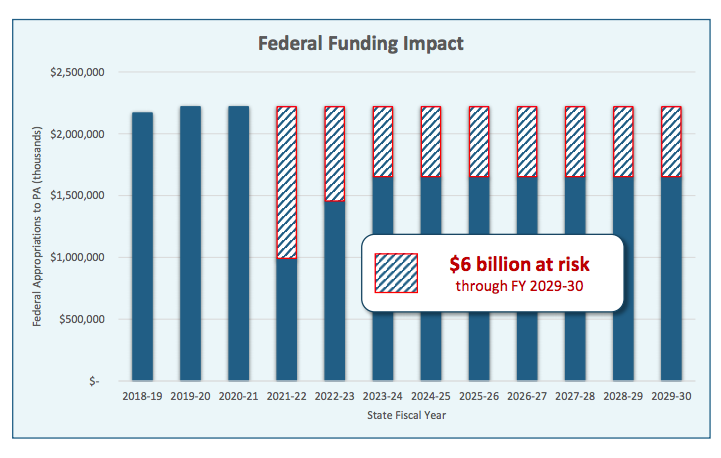