Democracy takes many forms. But its core commitment is that the people must set the basic terms of governance in a society. America was founded on this democratic principle.

Conservatives love to emphasize the non-democratic elements of the Constitution: the Electoral College or the equal representation of states in the U.S. Senate. And, certainly, the protection of rights was also a core value of the framers.

But this emphasis on checks on majority rule mistakes the framers’ basic intention. They created the most democratic, large-scale system of government the world had ever seen. The process of the adoption of the U.S. Constitution was itself precisely the kind of organic decision-making that allowed the will of the people gradually to emerge and to be served.

There is no one structure that defines a democracy. The Lincoln-Douglas debates over slavery in 1858, which led to Douglas’ selection as senator by the newly elected Illinois Legislature, shows that even direct, popular election is not an absolute democratic requirement. The crucial matter is that it be understood that the people are making a decision.

Ironically, direct democracy, which is always sporadic and incomplete, does not permit the will of the people to emerge with clarity. This is especially so today, with the breakdown in public trust in sources of information.

Thus, the Brexit vote was more unrealistic paroxysm than popular decision. Imagine how much better it would have been for the United Kingdom if Brexit had involved two elections: one vote to start the process and a second vote to make the final break, when the people would be better informed about the consequences.

Then there would have been the kind of intention, discipline and seriousness that democracy requires.

Fortunately, the American presidential selection process has evolved to permit just the kind of second step that is so helpful for the democratic maturity of a people.

The first time the people vote for a President, there can be a kind of Brexit error, a kind of uninformed enthusiasm.

It seems to me that former President Barack Obama was first elected in that way. Certainly, President Donald Trump was. Trump received fewer popular votes overall. But he was able to win the battleground states of Pennsylvania, Wisconsin and Michigan to seal his election.

Trump’s election might have been a protest, but it was a popular one.

In our system, it is reelection that allows the people to come to a fully considered decision on Presidential legitimacy.

That is why the 2020 presidential election is so important. That election will allow the American people a sober, second chance, to vote not just on Donald Trump, but on Trumpism itself.

America desperately needs a thorough repudiation of Trumpism. A defeat of his politics of division, his strategies of untruth and his policies of isolation. Only that kind of defeat will change the course of the Republican Party in the short run and the trajectory of America in the long run.

The election of 2020 also offers the Democratic Party a second chance to enunciate an alternative to Trumpism, not just in terms of particular policies, but in basic orientation.

Only a thorough victory for such an alternative can re-establish the national commitment to a fair and just global system of governance and economics, with generous American leadership and participation.  Peace and prosperity for all and not dog eat dog.

Like a second vote on Brexit, the American people now know better the consequences of hyper-nationalism, ethnic division and civic incivility. We have a national decision to make in 2020.

That looming decision is at the heart of what is wrong with impeachment.

In the first place, Trump must be on the ballot for this national decision to take place. Granted, the U.S. Senate is not likely to remove Trump.

But, if impeachment is undertaken only because the Senate will not act, then impeachment is a cynical ploy. That is like charging a defendant, but not wanting a conviction.

The other harm of impeachment is that its narrow focus and arcane procedures deny the American people our opportunity to govern.

Too many Democrats dream of impeachment because they are afraid that Trump cannot be beaten in a fair fight. The Democratic Party is very close to losing faith in the capacity of the people to govern ourselves. It is the job of the Democratic Party in 2020 to bring before the people a challenge to everything Donald Trump represents and to trust the result.

Both the Republican and Democratic parties had lost touch with millions of Americans who felt left out and left behind.

This political disconnect is better appreciated today, in such books as We’re Still Here, by Jennifer Silva, which chronicles voices of pain and hopelessness in Pennsylvania’s hollowed out coal towns. All of our public institutions failed, including the legal profession and America’s law schools, in providing a credible defense of constitutional government.

This time, we can address these fundamental issues in a proper popular context—in a reelection campaign for president. We can have a second set of debates like those of Stephen Douglas and Abraham Lincoln, addressing the full alternatives for our future.

Let U.S. House Democrats continue to investigate Trump’s abuses of power, but only to expose him in his campaign for president. Whether he continues in office, however, should be for the people to decide.

If we believe in democracy, we must even be willing to accept the judgment of the people if Trump is returned to power. Even that catastrophic decision would vindicate popular rule.

Even that setback would establish the American people as citizens and not subjects. Only a complete commitment to democracy can set the stage for a better future when Trump is gone. We can demonstrate that commitment right now by stopping the impeachment. 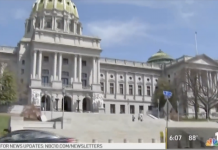