White and old no more. Forget everything you think you know about Scranton

SCRANTON, Pa. — Let’s take a walk through the heart of Scranton. After all, The Electric City will be stepping into the national spotlight again this campaign season. And the Scranton you see in the national media—even on NBC’s hit show “The Office”—isn’t quite the city you’ve been sold.

The city has gotten used to the bright lights over the last few years, thanks to the presidential campaigns of Hillary Clinton and Joe Biden. But that spotlight hasn’t always shined on the entire city. Instead, it has been used to highlight the political narrative of an old mining and textile town that’s been lost in a world that moved past it. As any resident will tell you, there’s some truth to that, but that’s far from the whole picture.

To get that complete view, you might want to lace up your sneakers and take a hike on the Lackawanna River Heritage Trail.

We’ll pick up the trail, which cuts through the city along the Lackawanna River and old railroad lines, at the Elm Street trailhead. To get there, you drive between two strip malls, one of which is mostly vacant. And has been for quite some time. If you’re taking a mid-day or mid-evening walk, you’ll smell the nearby pizza joint and two fast food restaurants.

You have two options. If you go south, you head towards Taylor, Moosic and Old Forge, three boroughs that have seen a lot of growth as Scranton’s population fell from 143,000 in 1930 to 70,000 today. Your trek will be almost entirely in the shade, and somewhat downhill. You’ll see some interesting stone and wood carvings. You might even see a deer or woodchuck on your walk.

Or you could walk through Scranton.

This isn’t quite the Scranton of Hillary and Joe—or Jim and Pam, for that matter—but it’s a city that’s definitely worth knowing.

“I think that the way the city’s story is told is just not complete,” said Julie Schumacher Cohen, the Vice President for Community Engagement and Government Affairs at the University of Scranton. 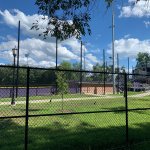 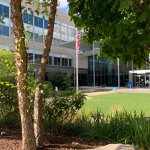 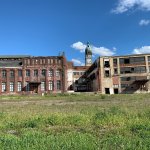 She often works with Alejandra Marroquin, of the Immigrant Inclusion Committee. Marroquin invites anyone who has never been to Scranton to find a small city with a better variety of restaurants.

Within a few blocks, a visitor can find authentic Mexican, Chinese, Thai and Lebanese food.

“Thanks to the immigrants that have come here for years,” she said. “There’s plenty to eat if you want to.”

Dispensing with the past

It’s not hard to find evidence of Scranton’s former glory as you walk along the river. You pass under and along several trail lines that used to ship coal mined from the nearby mountains.

This is the familiar story. Northeastern Pennsylvania heated the nation’s homes. Trolleys and trains reigned. Textile mills opened and thrived.

“The history of the city is a big part of the character,” says Schumacher Cohen.

Joe Biden was born in Scranton in 1942, right at the peak of its economic power.

But as workers toiled and dug deeper, the mines started to fill with water. Mining became more expensive. New energy resources were found. Finally, as the decades passed, the mines closed.

The wreckage of that era remains in the open as you walk along the river. You can see the dilapidated structures of old textile mills along your walk.

It was during that time that Biden’s family, like so many others, moved away from the city.

The problem with the current narrative about Scranton—one that will likely be told to the nation—is that it leaves out what has happened since. Scranton is still portrayed as a hardscrabble town with people still waiting for the mines and mills to reopen.

The evidence of what actually happened is right up around the bend.

Standing before you is the baseball stadium on the Kevin P. Quinn JS Athletic Campus. It’s got a field house, press box, and stands.

Just a decade ago, the area was the home of two not-well-kept municipal baseball and softball fields.

The complex is just one example of growth for the University of Scranton, which isn’t the only local higher education institution that has seen growth in the last 30 years. Marywood College became Marywood University in 1997. Lackawanna Junior College became Lackawanna College four years later.

In NEPA, a joyous celebration of Juneteenth — and a call to action

Scranton even has its own medical college. The Geisinger Commonwealth School of Medicine opened in 2007.

Between the local colleges, which also include Penn State Scranton and Keystone College, and the healthcare industry, the city has two pillars in its economy.

The local economy isn’t the only major aspect of the city that gets missed in the national narrative. The other is just as impossible to miss on the rail trail as the railroad relics.

This city isn’t the lily-white picture you see in that national narrative. The 2010 census says more than 25 percent of the city is made up of people of color.

“It’s just a skewed narrative,” Glynis Johns told the Capital-Star. “It makes a whole class of people invisible, and it makes their kids feel unwanted.”

Cognetti said the group is an important fixture in Scranton.

“It tells the story that diversity isn’t new here in Scranton,” she said.

Johns admitted she is supporting Biden in the election, but was disheartened during the campaign when he contrasted his Scranton and Delaware homes, saying there were no Black people in Scranton.

She pointed out that there were when he was growing up, just not in his section of town.

She wishes Biden would visit the people of Scranton who often get left out of that narrative.

Johns understands the excitement of having a hometown kid make it to the white house. It’s nice that he visits his childhood home, she says, but he should knock on other doors, too. Meet the kids who can’t afford computers for school, knock on the doors of other communities.

Like Biden, Johns left Scranton and didn’t think she’d be back. Unlike Biden, she came back and committed to the area. There are times the city frustrates her. But she’s not giving up.

“Scranton can be so complacent,” she said.

But it can change. She sees it daily.

“You can be so surprised at the stuff that actually changes,” she said.

Trains are still here, as part of the Steamtown National Historic Site. If you’re walking at night now, the radio tower atop the Times-Tribune newsroom lights your way. It used to just light up on the holidays. The Electric City sign glows at night.

This is the part of the narrative that rings true. Scranton still has strong values.

“I think there is a strong sense of community,” said Schumacher Cohen. “People still rely on their faith and family ties.”

Then there are two of the city’s biggest events of the year, the annual St. Patrick’s Day Parade and La Festa Italiana.

They’re a sign of the city’s strong immigrant past. Every generation seems to bring in new faces. At one point, it was the Irish, then the Italians. More recently, it’s been Hispanic immigrants.

Marroquin said it’s easy to see what has drawn immigrants to the region.

It’s a safe place for families, the cost of living isn’t exorbitant.

The city has been getting better recently, when it comes to working with the immigrant community, she said. But it still needs some work. Sometimes workers at city hall don’t understand the cultures they’re dealing with,” she pointed out.

Like the rest of the country, Scranton is struggling. Its school district is in danger of being run by the state because of decades of mismanagement. The city came close to bankruptcy last decade. The city’s previous mayor, Bill Courtright, abruptly resigned after pleading guilty to bribery and other charges.

As you move through the city on the trail, you can see the results of those bad management decisions.

The Scranton Lace Company, once one of the region’s biggest employers, closed in 2002. It stands crumbling, awaiting the completion of its destruction.

It’s a prominent site as you walk along the Heritage trail. It’s a site that symbolizes the Scranton of the past.

But just a few blocks past is another site, is a small park, frequented by local children. The Nay Aug Avenue Natural Play Area. Go a few blocks more, across the river, and visit Ipanema Grille and Samario’s, two popular restaurants.

And there are plans for the Lace Factory. The city hopes to turn the property into the Lace Villages, a place where people can live.

That’s the Scranton of the present.

The question now is how Joe Biden’s legacy will affect Scranton’s future.

White and old no more. Forget everything you think you know about Scranton