It’s Capital-Star Editor John L. Micek again, once again filling in for the vacationing Cassie Miller, who returns next week after a well-earned respite.

It’s an understatement to say that we’re living through the most challenging time in modern memory. The pandemic has claimed hundreds of thousands of American lives, touching all of us in some way, whether by losing someone we love, or by calling on us to console others mourning a loss.

So it might sound odd, during this most modern of times, to look back to the wisdom of ancient philosophers for advice and consolation.

But the writings of the Stoics, a school of thought driven by personal accountability and perseverance in the face of adversity, are built to order for our pandemic era. In fact, one of its foremost practitioners, the Roman Emperor Marcus Aurelius, also presided over a plague that ended up killing him.

I’ve been dipping into the teachings of the Stoics daily, and it’s made a pretty profound difference in my worldview and been a source of great solace and strength.

If you’re looking for a place to start, The Daily Stoic website is a treasure trove of readings, meditations and inspiration. You can also sign up for a daily newsletter that delivers little doses of wisdom to your inbox every morning.

So before we dive into the week’s Top Five Stories, here’s a nugget from Marcus Aurelius to take you into the weekend:

“Make sure you’re not made ‘Emperor,’ avoid that imperial stain. It can happen to you, so keep yourself simple, good, pure, saintly, plain, a friend of justice, god-fearing, gracious, affectionate, and strong for your proper work. Fight to remain the person that philosophy wished to make you. Revere the gods, and look after each other. Life is short — the fruit of life is a good character and the acts for the common good.”

It’s a tall order — but it’s wisdom for any age. Including our own.

Take care — and be kind to each other.
John L. Micek, Editor

A roadside billboard in Fayette County repeating a Republican accusation that Democratic nominee presidential Joe Biden suffers from diminished mental capacity has a deficiency of its own: A whopper of a spelling error.

“Biden’s dimensia is worsening, he is not fit,” the billboard reads, misspelling “dementia.” The billboard also repeats two denigrating nicknames that President Donald Trump has used to refer to the former vice president and his running-mate, U.S. Sen. Kamala Harris, D-Calif. As a matter of policy, the Capital-Star does not repeat those nicknames.

According to the Twitter user who took the photo above, the billboard is located on Route 21 just outside of Uniontown, at the intersection of Matthew Drive and the Route 119 bypass.

The billboard is owned by Penneco Outdoor Advertising, which is based in Delmont, Pa. in Westmoreland County. The company has a 1-star rating on Google Reviews. One review … reads, “They can’t master basic spelling.”

In an effort to help voters make an informed decision this Nov., the Capital-Star will be doing Q&A’s with all four candidates for the Office of the Auditor General, a statewide position currently held by Eugene DePasquale.

What is the role of the auditor general?

DeFoor: Well, think of the role of the Auditor General as your as your state fiscal watchdog. And basically what that is, the auditor general is responsible for making sure that government is accountable for how it spends taxpayer dollars, and to make government transparent with regards to how it also spends those tax dollars. 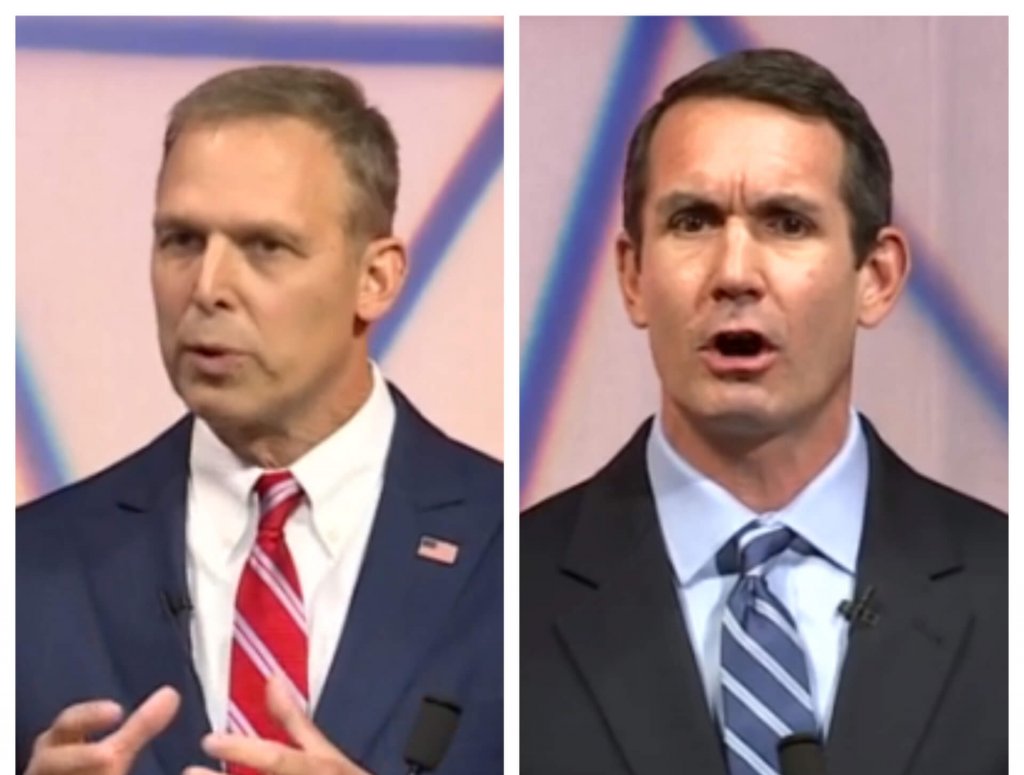 3. Perry and DePasquale clash over Obamacare, QAnon at second debate

4. Want to hand-deliver your ballot in Pa.? Here’s a map of election offices and drop boxes

If you’re one of the 2.2 million Pennsylvanians who requested to vote by mail-in ballot this year, you don’t have to rely on the postal service to cast it.

State law allows voters to hand-deliver their ballots to county election bureaus – the offices in each of Pennsylvania’s 67 counties that handle voter registration and administer state, local and federal elections.

But voters have other options for the first time this year. Thanks to a 2019 change to the state Election Code, some counties have established satellite voting offices or secure drop box locations to collect ballots and administer voter services.

5. Pa. has to pass a budget soon. Here’s what is on the table

Budget debates in Pennsylvania’s state Capitol are fast-moving affairs in the best of years, with legislative leaders talking behind closed doors with little input from the public.

This year, however, brings some historic variables: a pandemic, a major election, and volatile unemployment.

But in order to approve new spending and revenue plans, lawmakers must confront a projected $5 billion tax revenue shortfall that’s expected to endure through 2021 — the result of job losses and slow economic activity during the pandemic-induced recession.

And that’s the week. See you all back here on Monday.

Blaming ‘evil’ for violence isn’t as simple as it seems. A… by Capital-Star Guest Contributor June 13, 2022
'Critical to protecting our democracy': Author Tim Miller… by Frank Pizzoli October 24, 2022
Pennsylvania oil lobby keeps abandoned wells unplugged by Special To The Capital-Star May 10, 2022