Before she won her election in November 2018, state Sen. Katie Muth was already speaking out against her future colleague, Daylin Leach.

Muth, a rape survivor, called on Leach to resign after the Philadelphia Inquirer reported that the Montgomery County Democrat “engaged in questionable behavior with young female staffers and volunteers, from highly sexualized jokes and comments to touching they deemed inappropriate.”

She later called for Leach to be expelled from the Senate after another woman came forward to claim the senator coerced her into oral sex when she was 17, in 1991, and he was an attorney.

Leach adamantly denied the allegations, but welcomed the announcement in January that Senate Democrats had enlisted an outside law firm to investigate the claims.

On Monday, Muth told reporters she was interviewed for more than two hours about her experiences with Leach as a candidate and a senator. Investigators also spoke to Sen. Maria Collett, D-Montgomery, Muth said.

“I remember [Collett] and I had a conversation a few weeks ago where we were discussing the recent Senate investigation and our role in it and how we could be portrayed,” Muth said during a rally against workplace harassment in the Capitol rotunda Monday. “And I remember distinctly her saying to me, ‘I know we need to do this, but what if they don’t believe us?’ And I remember telling her there’s no way I’m going to let that happen.”

After being briefed on the review’s findings last week, Senate Minority Leader Jay Costa, D-Allegheny, called on Leach to resign, as have dozens of other Democrats since then.

Leach has said repeatedly he will not do so, leaving his fellow Democrats with a looming problem — if resignation is off the table, is expulsion the only way to move forward?

Leach took to his official Senate Facebook page to claim the report “absolved me of false charges made against me.” He also published a 26-page summary of the investigation compiled by the firm.

Collett and Muth’s allegation is listed as No. 8: “Senator Leach has engaged in inappropriate conduct towards colleagues in the Senate.”

“Conduct that qualifies as unprofessional and inappropriate as far as one would expect colleagues to treat one another was reported but none of the allegations involved claims of sexual harassment,” the summary stated. “Such conduct however may rise to the level of workplace harassment under the Senate policy if unabated.”

Muth told reporters she was “disappointed our information and our stories were left out” of the summary document, adding that she hopes a revised final report will include more detail.

During her campaign, Muth refused to share the stage with Leach at an event. He in turn called her a “dreadful person” and “a toxic hand grenade” to the chairman of Montgomery County’s Democratic Party, the Inquirer reported. The hostility has carried over into her time in the Senate, she said Monday.

“It’s not fun to come to work here. It’s draining. It’s emotionally exhausting,” Muth said. “I hope when we come back in the fall, there’s no longer that barrier to focus solely on our work.”

“Time’s up, Daylin,” Storm said. “These hallowed halls need to be honored. We need to trust them again.”

A request for comment to Leach’s office was not returned Monday afternoon.

But in an interview with PennLive, Leach maintained his innocence and said he intends to seek reelection in 2020. He called the push for him to resign “new McCarthyism.”

Muth said Monday she does not know how many of her fellow Democrats will support a move toward expelling Leach from the Senate.

Costa spoke at the rally Monday, calling workplace harassment “an important issue we need to collectively address.” He did not mention Leach by name.

Last week, Costa’s office disputed Leach’s claim that the report has been finalized. A spokesperson said the office expects a final version to be delivered as soon as possible.

“Senator Costa does not intend to move forward with expulsion before we get the final report back from Eckert Seamans,” his spokesperson said Monday.

In first ad, Dem DePasquale wants you to go where everybody knows his name | Tuesday Morning Coffee 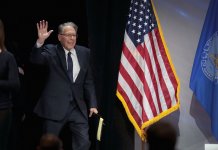 N.Y.’s James is right to go after the NRA for fraud and malfeasance. Seeking to dissolve it is a step too far | Bruce...