WASHINGTON — The U.S. House on Thursday voted to renew and expand legislation that aids victims of domestic violence, setting the stage for a battle in the Senate.

House lawmakers voted 263-158 to reauthorize the 1994 legislation that funds programs like rape crisis centers, shelters and legal services to victims of domestic abuse.

House Democrats were joined by 33 Republicans in approving the measure. The domestic violence law expired in February, and advocates warn that critical programs will be in jeopardy if it’s not renewed.

“This is not a partisan issue which is why I put a special emphasis on working to build bipartisan support for this critical legislation,” Fitzpatrick said in a statement.

The law has long had bipartisan support, but it has become contentious this Congress as newly empowered House Democrats are seeking to expand the measure. The National Rifle Association is opposing a provision in the bill from U.S. Rep. Debbie Dingell, D-Mich.,  that makes it easier to keep guns from those convicted of domestic abuse or stalking.

The issue is personal for Dingell. “This is something that I care very, very deeply about, because I lived in that household,” she told reporters outside the U.S. Capitol earlier this week. Dingell has publicly recounted how she hid in a closet from her father, who suffered from mental illness.

“I know what it’s like to live in a household with someone that has issues that can snap at a minute’s notice, and suddenly the gun is pointed at your mother or pointed at you. And as a child, you’re trying to grab a gun from someone and keep them from killing each other.”

But the NRA has called the new gun enforcement language a “poison pill,” arguing that it’s too broad and threatens the rights of gun owners.

Speaking on the House floor ahead of the vote on Thursday, Dingell implored her colleagues, “Do not let the NRA bully you. This is not a poison pill.”

In a statement, U.S. Rep. Madeleine Dean, D-4th District, said the House wrote “a new chapter,” with Thursday’s vote, by expanding “protections for young victims, survivors without shelter, and LGBTQ people; to prevent “intimate partner” homicides by prohibiting those convicted of dating violence from possessing firearms; and to protect the Office on Violence Against Women in the Department of Justice from being de-emphasized or consolidated into any other [Department of Justice] office.

“These steps are designed to ensure that victims of domestic violence have access to the resources they need,” Dean said.

Here’s the reality about #VAWA: it saves lives. In the nearly 25 years since it was enacted, intimate partner violence among women has dropped by 65%. We need to build on that progress by passing #VAWA19 – not falling for the NRA’s political games! pic.twitter.com/te0Us0uaG3

In a post to Twitter, U.S. Rep. Brendan Boyle, D-2nd District, said he was “proud to cosponsor and vote in favor of reauthorizing the Violence Against Women Act today. All survivors of domestic violence deserve the support necessary to be safe and get back on their feet.”

Still, most House Republicans voted against the measure on Thursday, signaling an uphill battle in the GOP-controlled Senate. Republican leadership sought a “clean extension” of the law earlier this year, but Democrats rejected that in hopes of expanding the bill.

U.S. Sen. Amy Klobuchar, D-Minn., a 2020 presidential contender, is leading an effort in the Senate to bar people who have been convicted of stalking or abusing dating partners from owning guns.

Klobuchar said at a press conference Wednesday that she’ll be lobbying GOP senators who have quietly expressed support for similar efforts in past years.

“They didn’t want to have their name on the bill, but they would have voted for it,” she said. “That’s a group I’m focusing on.” 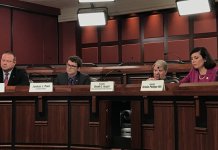