On Tuesday, voters in a blood-red Susquehanna River Valley district will go to the polls to fill the House seat vacated by former state representative Fred Keller.

What should be a straightforward special election to replace Republican Keller, now a U.S. congressman, with another Republican handpicked by the party has become a little more complicated, thanks to a disgruntled member of the GOP.

Representing the major parties on Tuesday’s ballot are Republican David Rowe, a former East Buffalo Township commissioner, and Democrat Jennifer Rager-Kay, a doctor who ran for the seat in 2018.

And then there’s Clair Moyer, a veteran who sought and failed to get the GOP nod via the private process that selects party candidates for special elections. He’s now running as a write-in candidate — unity be damned.

The 85th District seat has been open since May 24, when Keller, first elected to the state House in 2010, resigned his seat in Harrisburg to serve as the 12th Congressional District’s congressman. The state House district is made up of parts of Snyder and Union counties, including Selinsgrove, Lewisburg, and Mifflinburg.

In June, both local parties picked their candidate for the seat. Republicans selected Rowe, a 28-year-old fitness entrepreneur in Union County who served as vice chair of the East Buffalo Township Board of Supervisors before resigning to focus on his state House run.

Democrats, meanwhile, selected Rager-Kay, a 40-year-old ear, nose, and throat doctor who practices with UPMC Susquehanna Sunbury. Rager-Kay, who lives in Selinsgrove, ran against Keller in 2018 and lost by 35 percentage points.

Rowe said he is campaigning as the “very conservative, pro-life, pro-Second Amendment, pro-business” candidate, which he said would reflect the district’s values. That includes keeping taxes down and slashing regulations.

The district was last represented by a Democrat in 1988. In November 2018, Republican gubernatorial candidate Scott Wagner won the district 58-42, according to election analyst Ben Forstate, while GOP Senate candidate Lou Barletta won 62-38. Both candidates lost statewide by wide margins.

PA has a special election next Tues. for HD-85 in the upper Susquehanna Valley. This is one of the few NC PA districts that is actually trending (slowly) D, but since it's Aug and everyone's attention is focused on the Pres primary, I'm guessing there won't be any surprises. pic.twitter.com/X0XiXKiOGB

As a state representative, Rowe said his first act would be to add his name to the Taxpayer Protection Act. Pushed by the Commonwealth Foundation, a conservative think tank based in Harrisburg, the constitutional amendment would limit state government spending growth to the rate of inflation.

Proponents say the proposal forces the government to prioritize spending, but critics say it would tie lawmakers’ hands and make it impossible to offer necessary funding increases.

Rowe added that he’d vote against policies supported by moderate members of his party, like paid family leave.

“The times I’d break with Republicans is when they slip to the more liberal side,” he told the Capital-Star.

He touts the endorsements of the PA Chamber of Business and Industry and the local chapter of the state realtors association.

On the latter two, she wants the region to establish its own community college. While the district includes Susquehanna and Bucknell universities, there is no community college in either county.

“An alternative source for education and training would be a win-win,” Rager-Kay told the Capital-Star, noting her region has a worker shortage.

While her website makes no note of the issues, Rager-Kay, a lay minister, said she is “very vocal” about her positions on abortion and gun control. Abortion, she said, is a decision between “that woman, her partner, and the medical provider.”

Rager-Kay said she is a gun owner with a concealed carry permit, but also has the backing of Moms Demand Action, an anti-gun violence group. She supports background checks on long guns and a law that would allow for the temporary seizure of firearms in “red flag” situations.

As for endorsements, Rager-Kay has the backing of the state trade union council, as well as 314 Action, a national group focused on electing more STEM candidates to office.

Tuesday’s special election will be the seventh this year in Pennsylvania, and the sixth for a seat in the General Assembly.

Since 2015, 29 special elections have taken place in the commonwealth, according to Department of State records.

Picking candidates for special elections can be a covert and complicated process. A state lawmaker wants to change that

Under state law, parties can determine their own bylaws to select candidates for special elections.

For Democrats, an executive committee picks the candidates — usually after the county party makes a suggestion. When the open district includes multiple counties, committee people from each county gather to vote for a candidate.

Republicans, meanwhile, let the GOP county chair of the vacant district pick registered members of the party — not necessarily committee people — to attend a meeting and select a candidate.

If the district covers multiple counties, the state GOP gets involved. Each county party chooses conference attendees, proportional to their share of the district’s population. At a meeting presided over by the state party, these attendees vote on a candidate.

The last process is how Rowe was picked, which prompted Moyer, a 73-year-old registered Republican, to enter the race.

Moyer told the Capital-Star he tried to earn the Republican nod at the June 13 conference, but said he and another hopeful were “totally bypassed” by attendees.

Instead, the choice came down to two candidates: Rowe and Ben Ranck, a former Keller staffer and the congressman’s pick.

After the meeting, the Daily Item headline read “Rowe says Valley GOP must unite to ‘keep the district in Republican hands.’”

When asked if the party has banded together, Rowe said “the proof is in the pudding.” He pointed to an Aug. 13 endorsement from Keller.

That message hasn’t reached Moyer. When he left the conference, “I said ‘the battle’s just begun.’” He later launched a write-in campaign.

“This all boiled down to one or two people’s choice,” Moyer said. “All the voters have to do is ratify the choice. I disagree. That’s not democracy.”

Moyer said he is “pro-life,” supports eliminating property taxes, opposes gerrymandering, and wants Pennsylvania to join other states in calling for a constitutional convention to limit the power of the federal government.

He also wants to change the process that let the party select Rowe. 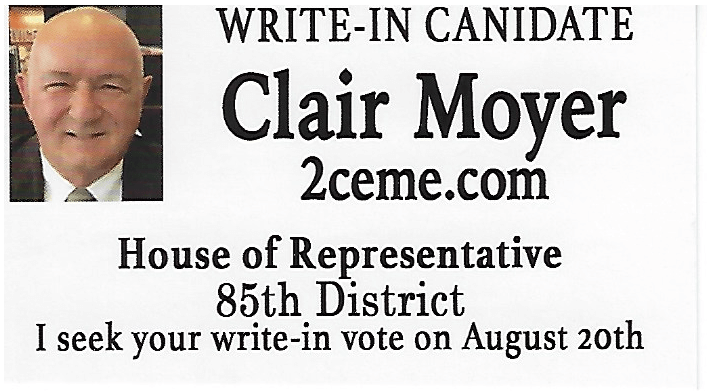 Rowe told the Capital-Star he thinks Moyer “is stricken with a case of sour grapes.” He isn’t concerned about Moyer’s crossover appeal, claiming his opponent is a liberal who voted for Democratic Gov. Tom Wolf last year.

Rowe also singled out Moyer for backing some restrictions on guns. At a recent candidate forum, Moyer said he does “not support having an AR-15. There is no reason to have one.” Rowe called the issue “a slippery slope.”

On Wolf, Moyer said “it doesn’t matter who I want to vote for. It’s my business.” He added that he won’t stoop to name-calling about ideology.

Moyer guesstimated his odds of winning at “80 percent.” Rowe said he’s “not taking anything for granted,” but thinks his message is resonating with voters.

Rager-Kay said she thinks the intra-GOP debate has opened up an opportunity for her. She pointed to endorsements from some local Republicans, including a former township commissioner from Rowe’s own hometown.

“This is probably the closest I think any non-Republican will get to flipping this district,” Rager-Kay said. “Anything can happen.”