The House Appropriations Committee advanced a $33.997 billion budget Monday, the opening salvo in the week before the June 30 deadline to secure a new fiscal blueprint.

A spokesperson for Gov. Tom Wolf said the plan “meets [the] objectives” laid out in the Democrat’s February budget proposal.

State spending would increase by 1.8 percent compared to last year under the plan. The budget would also put at least $250 million into the state’s minuscule rainy day fund, which would currently cover just a few hours of state operations.

The proposed spending plan is just $149 million less than Wolf’s initial ask in his February budget address. But it does not include some of the administration’s — and legislative Democrats’ — key priorities.

The biggest: no minimum wage increase to $12 an hour from the current rate of $7.25 — the federal minimum — as well as no funding for the state’s General Assistance program, which provides small cash payments of roughly $200 a month to people with disabilities and those in treatment for addiction.

Democrats on the committee made their frustration with what they called misaligned priorities known, but lawmakers from both parties pointed to smaller gains for libraries, rape crisis centers, and domestic violence shelters as bipartisan wins.

The budget has buy-in from both Wolf and Senate Majority Leader Jake Corman, R-Centre.

“In February, Governor Wolf outlined a budget proposal that would make investments in all levels of education, build on our progress to have the nation’s strongest workforce and help children and their families at early periods of development, while making large deposits in the Rainy Day Fund and structurally balancing after years of deficits,” Wolf spokesperson J.J. Abbott said in a statement.

“The appropriations bill now before the legislature meets these objectives.”

Abbott pointed to increases in workforce development dollars, as well as the commonwealth’s righted fiscal shift — from a multi-billion dollar hole at the start of his term to a surplus this year.

Some highlights from the proposed budget include:

“I suspect that if each of us, as members of the General Assembly, was asked to draft their own budget, there would be about 253 different spending plans,” House Appropriations Committee Chairman Stan Saylor said after revealing the plan.

Saylor, R-York, added the budget was the result of compromises between both the Republicans and Democrats in each chamber, as well as Wolf.

But many House Democrats are stewing over what isn’t included. The budget assumes the elimination of the General Assistance program, plus no action on a minimum wage increase.

Wolf had included a plea to bump the state’s current $7.25 minimum to $12 this year, followed by incremental steps to $15 by 2025. The Senate Republican majority had seemed willing to work on the proposal, but House Republicans greeted the proposal frostily.

Keep reminding myself that you have to take the good w the bad on all legislative votes…it isn’t a buffet where you get to pick and choose what you want. This budget could be much worse and could be much better…#Decisions

Only a proposal to pull $30 million from the Keystone Recreation, Park & Conservation Fund to patch DCNR’s budget did not make it into the final plan. According to John O’Brien, spokesperson for Saylor, the fund was not used in response to constituent concerns brought to GOP lawmakers.

In a later afternoon caucus meeting, rank-and-file House Democrats laid into the budget, focusing especially on the environmental funding shifts and the lack of a wage hike.

According to the state Independent Fiscal Office, nearly 2 million workers would see wage increases under the plan in 2019 alone. It would put an additional $3.2 billion in income after taxes into their pockets.

The March 2019 report by the fiscal watchdog agency also projects that 33,000 jobs would be eliminated. Of the jobs lost, 26,000 are projected to be part-time positions.

While Wolf asked, advocates protested, and lawmakers politicked for a wage hike, the lack of success led some Democrats to question who, in fact, was cutting the backroom deals.

“If more women had been in the negotiating room, we’d have a higher minimum wage,” Rep. Patty Kim, D-Dauphin and an ardent backer of a wage increase, said during a closed-door caucus meeting, according to two sources. Her statement was met with cheers and applause that could be heard in the Capitol hallway.

Rep. Tony DeLuca, D-Allegheny, made a speech near the end of caucus reminding his fellow representatives — especially the caucus’ bevy of often progressive, first-year lawmakers — that Wolf had brokered deals with much stronger Republican majorities before to increase education spending and help working people.

He also wanted to remind the fresh faces that compromise is an ever present part of governing, especially as a minority party.

“There’s never a budget that everyone is gonna like,” DeLuca told the Capital-Star after the meeting.

While some priorities loom larger than others, the budget plan also lacks some smaller wins.

As of right now, it does not include a fee on municipalities that depend solely on the State Police, funding for the 2020 Census, or additional funding for voting machines. The latter is still under negotiation, according to House Majority Leader Bryan Cutler, R-Lancaster.

The lack of census funding in particular struck lawmakers from growing, urban areas with burgeoning Latinx populations as notable. Rep. Mike Schlossberg, D-Lehigh, said the lack of funding “jumped right out” at him, even if he liked the new general education funding and $25 million invested into pre-K.

“There’s very little more important to the state for the next ten years than the census,” Schlossberg added.

The full House will consider the proposed budget Tuesday. Corman told PennLive’s Jan Murphy he expects the Senate will take up the spending plan on Thursday. 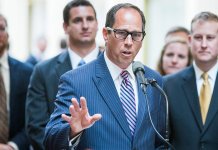