This breaking story will be updated:

The Pennsyvlania Senate’s most powerful Republican said Wednesday that he will not seek re-election this November.

In a statement released Wednesday night, Senate President Pro Tempore Joe Scarnati, R-Jefferson, said he’d been “proud to have been a leading advocate for rural Pennsylvania” in the upper chamber. But after 20 years in the Senate, with 14 of them spent as the chamber’s presiding officer, and a three-year tenure as lieutenant governor from 2008 to 2011, it was time to move on.

“Today I am announcing that I will not be seeking a 6th term as Senator for the 25th Senatorial District.  At the end of this year, I will have served the people of the 25th Senatorial district for 20 years. With the support of my Senate colleagues, I have spent the last 14 of those years in the position of President Pro Tempore and served as Pennsylvania’s 31st Lieutenant Governor from 2008 to 2011. I have worked with five Governors and throughout this time I am proud to have been a leading advocate for rural Pennsylvania values.”

Scarnati’s retirement announcement is the second in less than a week. On Friday, Sen. Andy Dinniman, of Chester County, the ranking Democrat on the Senate Education Committee, announced he would not seek re-election.

Half of the 50-member chamber, those senators serving in odd-numbered seats, will face the voters in November. Until now, there had been very little flux in the ranks. In the 203-member, majority Republican House, more than a dozen lawmakers have announced that they will not seek re-election.

Republican sources told the Capital-Star Wednesday that Scarnati briefed GOP senators about his decision on Wednesday night and that an announcement would be forthcoming. Scarnati did not immediately return a call seeking comment about his decision. The call was described as “collegial.”

In his statement, Scarnati said that while he’d been “greatly humbled by those who have once again supported my petition to have my name on the ballot, after many conversations with family and close supporters I have made a personal, and not political, decision that I will not be filing my petitions.

“My concern with leaving office has always been in large part wanting to ensure the 25th Senatorial District is well represented after my departure from the Senate,” he said.

“I came to Harrisburg in 2001 as the first Senator elected as an independent. I was disappointed by the choices that our sitting Senator at the time had made, and could not support his candidacy. My independent streak never ended there in my tenure.  I have always believed that both sides of the aisle must work together on behalf of our constituents and compromise on issues without compromising on our values.  At the same time, I have always sought to protect working families and their hard earned tax dollars. Since the days of Governor Ed Rendell’s administration, I have actively blocked the massive proposed tax hikes on workers and businesses as proposed by his Administration and others who have followed.

“I am immensely proud of what we have accomplished for the Commonwealth during my time in the Senate. We have overseen the largest Republican majority since Eisenhower was president (34-16). We have protected the unborn by supporting a strong pro-life agenda. We have fought to safeguard our 2nd Amendment rights that the liberal left continues to attack. In 2012, we passed a landmark Marcellus Shale Impact Fee bill to ensure responsible drilling and investments in our local communities. We have prioritized job growth and creation across Pennsylvania. We have fought for historic levels of school safety funding – and will continue that fight.

“I thank my family for their unwavering support over the last two decades. Serving in public office is not something that you do alone. I am looking forward to traveling and spending more time with my wife Amy, our children and grandchild.  I also look forward to helping my parents who are both in their 80’s.

“Throughout my time in office, I am grateful to have been surrounded by friends and fellow senators whom I respect.  My success has been largely in part because of serving with incredible colleagues and working with a team of talented individuals who are not my staff, but my co-workers. It takes a strong team to serve constituents and to oversee operations of the Senate.

“I sincerely thank my constituents for the honor of representing them. While the announcement of my future departure comes today, I will still be actively engaged in serving my district and the Senate for the next nine months. I also look forward to continuing to lead the effort this year to maintain our Senate Republican Majority.  Following my departure from the Senate, I will be taking a more active role in my business and evaluating other opportunities.”

Among those mentioned as a potential replacement is state Rep. Cris Dush, R-Jefferson, who announced his retirement from the House last November. In a post to his Facebook page, Dush, who’d announced a GOP bid for Pennsylvania auditor general, appeared to open the door to a Senate candidacy: 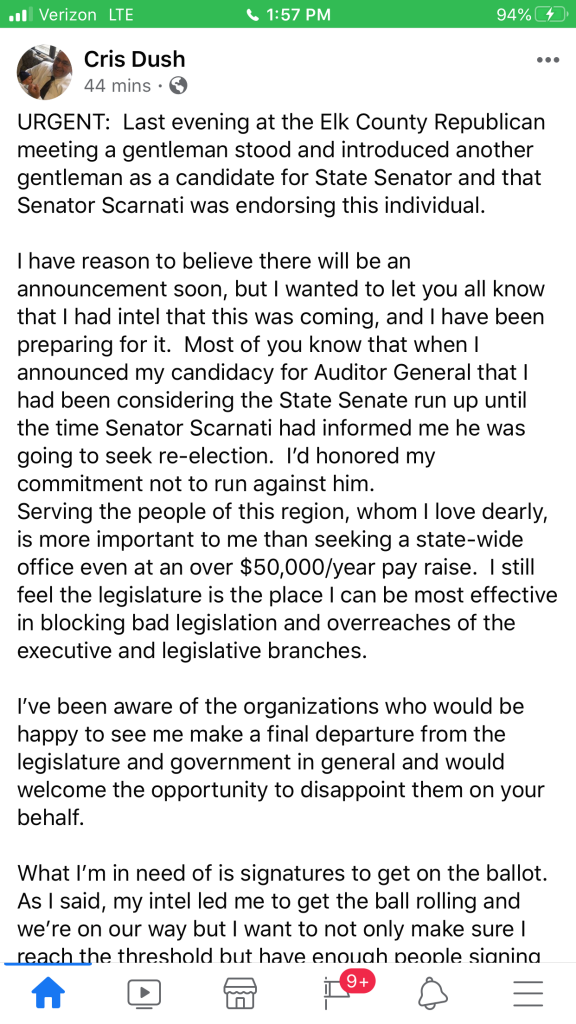 Senate Majority Leader Jake Corman, R-Centre, issued the following statement in response to Scarnati’s announcement that he will not seek re-election:

“We have been fortunate to have Joe’s steady hand at the helm of the Senate, providing critical leadership under circumstances that often were far from perfect. Joe has set an example for all of us with his unmatched ability to build consensus, encourage civility and ensure common sense would prevail.

“His record speaks for itself and his honesty and sincerity is well known to those of us who have served with him. I am confident Joe will channel those qualities into his next path in life. Until then, I look forward to all that we can accomplish as with finish this session under his guidance. He will be missed.”

While clearly conservative and not shy about being a sharp-elbowed partisan when the occasion called for it, Scarnati was “highly regarded.” veteran Franklin & Marshall College pollster and political analyst G. Terry Madonna, said Wednesday. “You can’t say that he wasn’t an effective leader of that caucus.”

Senate Appropriations Committee Chairman Pat Browne, R-Lehigh, credited Scarnati for his steady hand during a decade’s worth of budget negotiations.

“He was very steady during a very chaotic time,” Browne told the Capital-Star Wednesday, referring to the difficult budget years of the Great Recession and immediately thereafter. “Because of that, we’re coming into the new decade more financially stable, and that is a tremendous contribution to the citizens of Pennsylvania.”

He was first elected to the Senate as an independent, replacing former Sen. Gene Slocum, in 2000, after Slocum was convicted of illegal dumping, and resigned. He moved into leadership after the ouster of then-Senate Majority Leader David J. “Chip” Brightbill, R-Lebanon, and then-Senate President Pro Tempore Robert Jubelirer, R-Blair, who were the architects of a controversial government pay raise. Both were defeated in Republican primary elections in 2006.