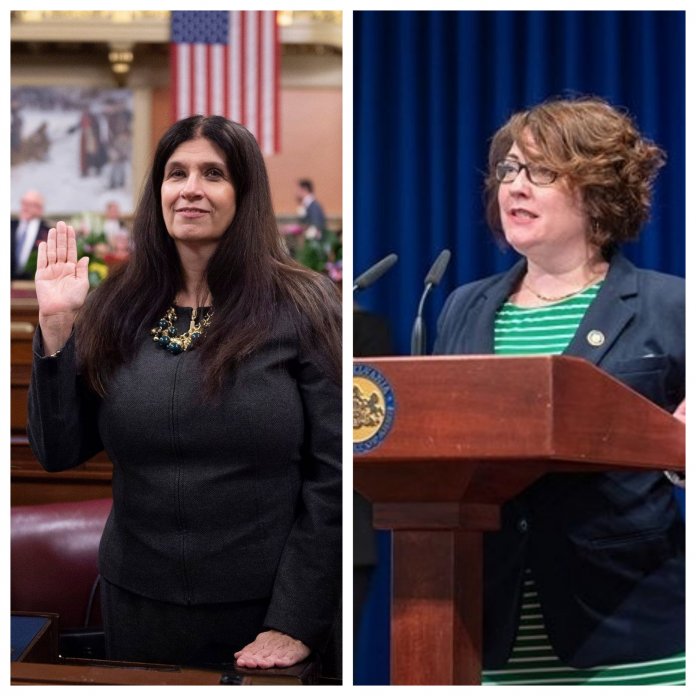 As they looked to flip stalwart Republican seats in 2018, Pennsylvania Democrats found an effective rallying cry in the natural gas pipelines snaking their way through Philadelphia’s leafy suburbs.

Two years later, with just three GOP lawmakers out of nine still standing in the once-red redoubt of Chester County, divisions over how to approach pipelines and the environment are still smoldering.

But contaminated water and sinkholes have led to millions of dollars in fines from state regulators. Meanwhile, fears of explosions have sparked grassroots opposition from residents near the pipeline’s route. It is projected to be completed in mid-2020 after multiple delays.

The project is also at the center of two criminal investigations — including one, by the FBI, that, according to published reports, has looked at Democratic Gov. Tom Wolf.

The pipeline traverses both lawmakers’ Chester County districts. Otten, whose district includes Spring City, Brandywine and Uwchlan, won in 2018 as an anti-pipeline crusader inspired by concerns for her son.

But both now face a primary for opposite reasons. Howard’s challenger, who is Otten’s former campaign manager, says the incumbent hasn’t done enough to halt Mariner East. And Otten’s challenger says the firebrand’s stern opposition to the pipeline is too much.

A different shade of green

She’s also sponsored a number of pipeline-inspired bills, including a proposed amendment to the state constitution guaranteeing that municipalities can “enact local laws without interference from corporations or pre-emption by state or federal government.”

Otten also became the center of controversy last April when she compared pipeline workers to Nazis in a Tweet. Otten said she was taken out of context. But she was criticized by the state GOP, local trade unions, and even fellow Democrats.

The brief record was enough for Rose Danese, a 56-year old hospital technician, to announce she was challenging Otten, claiming the incumbent is too focused on Mariner East.

“I just think there’s more things to do environmentally then fight the pipeline,” Danese told the Capital-Star.

Danese added that it isn’t “good to go around telling people you can stop” Mariner East. “You really can’t, you can just be safe about it.”

Instead, Danese is advocating for a different set of green policies — legalizing recreational marijuana, and utilizing sales taxes on weed to fund an “Industrial Hemp Authority.” The authority would issue low interest loans to buttress hemp growers.

Hemp, Danese argued, could then replace single-use plastics, solving one environmental woe. In Harrisburg, she added she would fight the opioid crisis and raise the minimum wage.

In a text message, Otten said she was sure that local Democrats who think anti-Mariner East activists are “a bunch of alarmists” had encouraged her opponent to run. Her strong stance is because, Otten argues, “we can’t have incremental changes on this issue.”

“I’ve been told that certain folks want to ‘teach me a lesson,’” Otten wrote. “So, I just need to keep my eye on the ball and not let the turkeys get to me.”

Danese said she had been encouraged to run, but did not say by who.

Next door, Howard faces a challenge from Ginny Kerslake, a friend of Otten who ran her 2018 campaign before her own unsuccessful run for county commissioner last year.

A vocal opponent of Mariner East, Kerslake, 55, says Howard has ignored constituents’ concerns about the pipeline, and should take a tougher and louder stance against it.

“I’ve reached out to [Howard] multiple times via phone and email hoping that we could work together and that she could be our ally, but she’s refused to even have the conversation,” Kerslake told the Capital-Star.

In a statement, Howard argued that most of Kerslake’s positions aren’t far off from her own. Instead, Howard says she is being challenged because she “refused to be drawn in to [Kerslake’s] confrontation activism and extremist tactics” that “leads to burning bridges, not building them.”

According to MainLine Media News, a news website, Howard called the pipeline “the most significant environmentally impacting local issue” in the district during her 2018 run, and suggested a short term moratorium on construction, followed by a long term transition away from fossil fuels.

If elected, Kerslake said she would have other priorities, including pharmaceutical costs, the opioid crisis and gun control.

But even bringing in forceful opponent of Mariner East, Kerslake said, could spark changes for those concerned about the pipeline.

“If we had all the representatives along Mariner East being as strong a voice as [Otten] on this, the Governor couldn’t ignore us,” Kerslake told the Capital-Star.

Caught in the feud

Legislatively, Otten and Howard have at times been allies, based on the bills they’ve sponsored.

Both are co-sponsors of a bipartisan bill creating a pipeline safety and communication board, while Otten has backed a Howard proposal to mandate constant monitoring of pipelines.

“As you all can appreciate, seconds matter in a pipeline emergency,” Howard wrote in a memo seeking support for the legislation. “We must assure that pipeline companies operating within our Commonwealth not only make use of the latest technology to monitor system safety, but also provide “real-time” alerts to state agencies and local residents.”

But Howard hasn’t backed Otten’s self-government amendment, for example. Her name is also absent from a similar pipeline monitoring board proposal that Otten is sponsoring.

Marty Marks, a spokesperson for Howard’s campaign, told the Capital-Star that the two first year lawmakers “share a passion for the environment.”

Otten said she has spoken to both Howard and Kerslake since the campaign kicked off, and despite her friendship with Kerslake, Otten said she doesn’t plan to back either candidate in the race.

Her endorsement “doesn’t really matter” in her colleagues race, Otten told the Capital-Star.

In search of bipartisanship, lawmakers work to trim the fat in Pa. House