In the final session of the year on Thursday, legislators voted to reduce the tax break for new residential construction developments, effectively cutting the subsidy in half. Mayor Jim Kenney has signaled he will sign the bill.

The changes will go into effect in January 2021 and are expected to generate $270 million in city revenue over a decade.

Council President Darrell Clarke, the main sponsor of the legislation, characterized the changes as hitting the “the sweet spot in terms of being fair and equitable across the board.”

The legislation was adopted in its current form in 2000, and repeated efforts to modify it have failed. Clarke was blunt when asked why now was the time to change the program: “We have 17 votes.”

But even before the council voted on the legislation, At-large Councilwoman Helen Gym signaled the political fight over the program was not over, calling the reforms a “first step” in the struggle for increasing tax revenue for the school district and creating more affordable housing.

“Just because we made this change doesn’t mean it’s over,” said Gym, a Democrat.

A Kenney administration official said the mayor intended to honor his commitment to sign the tax abatement bill following City Council’s approval of an amendment last week to delay the implementation date by six months.

Under the new program, owners of new residential construction projects will pay no property taxes on the added value in the first year, 10% in the second year, 20% in the third year and so on until they are paying the full tax assessed on the property. Abatement recipients pay taxes on the value of the land.

Legislators left in place the full 10-year tax break for commercial properties and the rehabilitation of residential homes.

Clarke contended the tax break for commercial properties generates jobs and similar versions were available in other municipalities. He added that council members aimed to incentivize the rehabilitation of the existing housing stock in large swaths of the city where the abatement remained underutilized or vacant land was scarce.

The law also requires that an independent expert evaluate the impact of the entire tax abatement on the real estate market and draw up recommendations for future reforms every three years.

The changes will usher in a new era for the development community, which did not support the legislation, and are expected to undercut future property tax revenues and investments.

The Kenney administration anticipated Clarke’s reforms will haul in $56 million more in property tax revenues by 2030, but lead to a loss of more than $15 million and cut construction volume by 28,000 new properties by 2040.

Although the Kenney administration supported a review of the tax abatement program, officials have maintained the existing program boosted construction, investment and tax revenue in Philadelphia.

The number of residential property owners on the 10-year property tax program has seen an uptick in recent years.

The 10-year tax abatement program for both residential and commercial properties cut an estimated $158 million in property tax revenue — $71 million from the city’s coffers and $87 million from the school district.

The tax abatement program became a significant issue during the primary election earlier this year, when many political newcomers said they wanted to bring it to an end or change it drastically.

Clarke committed to modifying the tax abatement program in September, just weeks before the general election, and City Council members fell in line.

Under threat from mayor, City Council agrees to push back start date of changes to tax abatement

The council president staved off any chance of a drawn out public debate on the changes by introducing his proposal during the final session when legislation could be floated before the end of this council’s term.

Although a handful of council members offered competing bills to change to the program over the years and the real estate industry lobbied to water down Clarke’s bill, council members did not propose a single amendment; they apparently agreed to hold their amendments until a new City Council is sworn in next month.

Kenney, however, rammed through his own last-minute change when he threatened to kill the legislation with a pocket veto unless council members delayed its implementation by six months.

At the council session, affordable housing advocates assailed the reforms, saying they didn’t go far enough. Some called for an end to the program, contending it was a handout to developers and siphoned much needed funds from the school district.

Gail Loney, a North Philadelphia resident, said the abatement program failed to bring the promised growth, beautification and jobs to communities of color.

“People of color are not getting many of these jobs,” she said. “Our communities are experiencing great disruptions socially, emotionally and environmentally.”

“It’s fair to say that white people have more access to mortgage loans in Philadelphia,” she said, “which means that mostly white people are getting property tax abatements. … Why are you continuing to widen the racial wealth gap?” 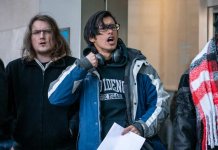