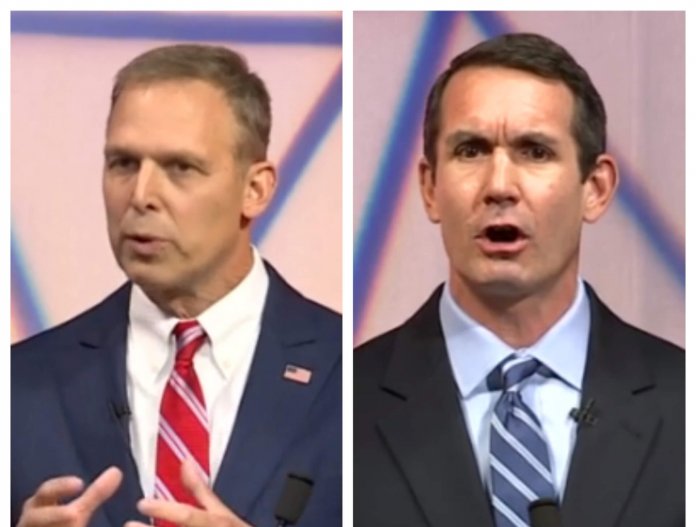 Perry is a former Army helicopter pilot and state legislator who was first elected to Congress in 2012. DePasquale is term-limited out of office as the elected state’s fiscal watchdog, and also previously served as a state legislator. Both hail from York County.

The 10th District includes all of Dauphin County, including the state capital of Harrisburg, as well as parts of Cumberland and York counties, including Carlisle and the city of York.

The district, which President Donald Trump won by 9 points in 2016, is widely seen as one of the most competitive this cycle, particularly due to the presence of blue-trending suburbs.

You can read a recap of the first debate here.

The law, also known as Obamacare, stops insurance companies from discriminating against people with preexisting conditions, mandates minimum coverage standards for health care plans, and allows individuals to stay on their parents’ plan until age 26, among other provisions.

Perry, both in his close 2018 reelection, and in the first debate, has been frequently targeted on the topic, particularly because of his votes to eliminate the law.

He added that he hoped the law was struck down by the U.S. Supreme Court, which is slated to hear a challenge the week after Election Day.

Perry also defended himself by pointing to intra-caucus negotiations over the exact terms of an ACA repeal in 2017, arguing he tried to strengthen the bill by allowing high-risk pools for people with preexisting medical conditions.

But according to the Carlisle Sentinel, the conservative Freedom Caucus, of which Perry is a member, instead only pushed for the pools because they wanted the ACA repeal to let states decide if pre-existing conditions should be protected. Studies have found that the pools would have increased costs for sick Americans.

DePasquale countered that he wanted to strengthen the law by allowing automatic enrollment into Medicaid or let business buy into Medicare.

Earlier this month, Perry was one of 18 Republican congresspeople to vote against a non-binding resolution condemning QAnon.

QAnon is a conspiracy theory that falsely believes a secret cabal, including many high-profile Democrats, worships Satan, engages in child sex trafficking, and is plotting against the United States.

Followers of the theory have been linked to a small but growing number of crimes, including kidnappings and a murder.

DePasquale offered a sharp critique of the vote, arguing that it was Perry pandering to extremists groups on the right.

“Certain people, Congressman Perry included, are worried about alienating a far-right fringe in an election campaign,” DePasquale said. “You can condemn hate, and not make it illegal, at the exact same time.”

But Perry argued he was standing up for freedom of speech by not condemning the conspiracy theory.

“A lot of people dislike a lot of things in this country, some people don’t like certain vegetables or what have you,” Perry said in defense of his vote. “But it’s very dangerous for the government … to determine what is okay to like and what is not okay to like.”

The two were also asked to explain a barrage of ads going back and forth over their campaigns’ respective funding.

Perry pointed to DePasquale fundraising with Gov. Tom Wolf as the auditor general looked into his business waiver program during the pandemic, as reported by the Capital-Star.

DePasquale has since released early findings, and critiqued Wolf, a result he tried to play up during the debate. But Perry has criticized the crossing of politics and official duties, and argued the audit was not harsh enough.

“We should have hired Captain Obvious to do this audit,” Perry said.

DePasquale, meanwhile, was asked to explain ads attacking Perry for connections to the pharmaceutical and insurance industries.

According to Kaiser Health News, Perry has not taken any money directly from pharmaceutical companies. But he has taken more than $90,000 from insurance companies, such as Blue Cross/Blue Shield, according to the Center for Responsive Politics.

A DePasquale campaign spokesperson pointed to $3,500 from AmerisourceBergen, a company that distributes, but does not produce, pharmaceuticals.

Perry has benefited from at least $200,000 in dark money ads from a Big Pharma-backed nonprofit that celebrate his vote against a drug pricing bill and support for a watered down GOP counter offer, as reported by the Capital-Star.

There was no mention by either candidates of reforms to federal laws governing money in politics.