In a farewell message, the account, run by previously unnamed Treasury employees, said the account was an “experiment began as a direct result of [Torsella’s] vision to rebuild community and reconnect people with a government that is supposed to serve them.”

“It’s been an experiment that we believe has been a success, and one we hope other government institutions follow,” the farewell message, posted around 8 p.m. Friday, added.

By 8 a.m. Saturday, the account appeared to be deactivated.

They also noted that “Treasury as an institution will still be here doing great things, just under new management.”

Created in the summer of 2019, the faceless account, @PATreasury, purports to “handle all of the money.”

It then amassed 31,000 followers through withering social commentary and using internet memes, trending jokes and Twitter’s irreverent style to publicize state run saving plans for people with disabilities or $100 in starting capital for families that start a tax free, Treasury-run college savings account. 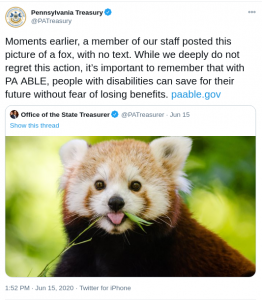 The latter is a program Torsella, a former aide to Philadelphia Mayor Ed Rendell and U.S. envoy for the United Nations, successfully advocated for during his one term as state treasurer. He lost reelection this November to Republican Stacy Garrity, an Army veteran and businesswoman. She’ll be sworn-in to office in late January.

The treasurer is charged with managing, both directly and indirectly, more than $120 billion in state investments.

Those investments can be leveraged for short term loans to the state to pay pressing bills — such as when Torsella approved loans for road projects this month — or to join shareholder actions against CEOs, like Torsella did against Facebook’s Mark Zuckerberg. 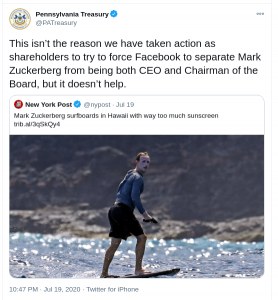 The treasurer also has a voice in managing the state’s pensions, which must decide how to spend billions of dollars to meet retirement payments for hundreds of thousands of retired teachers and public servants.

While the position has a limited voice on statewide policy, that didn’t stop its Twitter account from skewering many of the men who embody modern American capitalism — such as Amazon CEO Jeff Bezos, tech entrepreneur Elon Musk, and Zuckerberg. 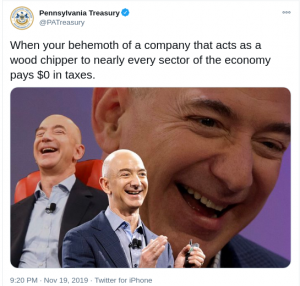 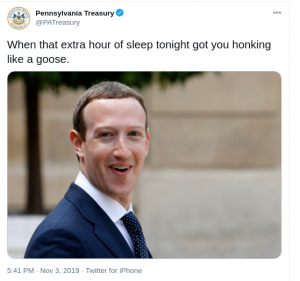 Torsella also had to, occasionally, rein in the account. 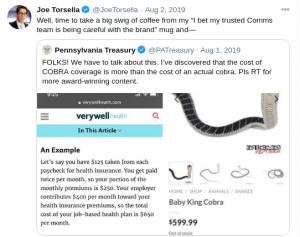 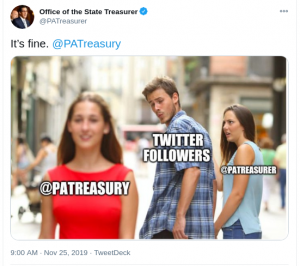 Min-Seok Pang, an associate professor of management information systems at Temple University who’s studied public sector communications, told the Capital-Star that the account was an early adopter among government accounts to the language of Twitter.

Even as local media declines, Pang added, it’s important for the citizens to be aware of retirement savings accounts and transparency initiatives from the state Treasury or other agencies.

“In this age, it’s important for any government to communicate with citizens directly and Twitter is a great tool for direct communications,” Pang said.

He thought that the state Treasury made good use of the medium, and was sad to see the account go.

His only advice for future users was simple — identify the author of the Tweets.

“You know who created a press release,” Pang said.

Connolly and Miller started hinting at its end in the weeks before it was deactivated.

“The most gratifying part of this hasn’t been the jabs at billionaires or the jokes (though for the record, Wall Street deserves far harder punches than our tweets),” the Treasurer’s office added in its farewell Tweet. “The best part has been watching this bizarre and special community grow and watching you connect with each other.”

The message added that Torsella and company would “just be finding different ways” to fight. But don’t worry, they also did hint earlier of how they’ll get their snark across in the future.