Pennsylvania voters will have a chance to reinforce the unlawfulness of racial discrimination with a state constitutional referendum during May 18 election.

The question asks voters if they support “adding a new section providing that equality of rights under the law shall not be denied or abridged because of an individual’s race or ethnicity?”

It seems a no-brainer that most Pennsylvanians would support adding equal protections for race and ethnicity to the state’s guiding legal document. But a graphic calling for a no vote on the measure is circulating online on right-wing social media pages.

Facebook users have posted the graphic, or similar ones, to at least four conservative pages on the social networking site, the Capital-Star had found — including an independent fan page for state Sen. Doug Mastriano, R-Franklin.

More than 100 of his supporters liked a post in the “Senator Doug Mastriano, We the people ask you to run for governor!” page, calling for the 16,000 members to vote against the non-discrimination amendment.

The graphic was also shared in posts or comments in Free PA and ReOpen PA, two groups that advocate for the repeal of Gov. Tom Wolf’s executive powers.

Some graphics and mailers from Wolf’s opponents call for a “yes, yes, yes” on the amendments limiting disaster emergencies’ length, allowing a legislative override of such emergencies, and the non-discrimination amendment. 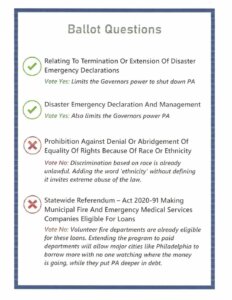 But this graphic calling for just two yes votes argues that racial discrimination is already unlawful, and adding ethnicity could invite “extreme abuse of the law.” It also calls for a no vote on the referendum expanding lending to professional fire departments.

Passing the non-discrimination amendment would be “another crap chute for more dysphoria to come into legal play for the legislative prostitutes (includes lobbyists, lawyers) to ramp up litigations to line their wallets,” said one supportive commenter.

The exact origin of the graphic is unclear. Marc Scaringi, a conservative Harrisburg attorney and radio host who argued cases for businesses hoping to defeat Wolf’s executive orders, told the Capital-Star he did not know its origins.

In an email, Scaringi said he agreed with the conclusion. He pointed to the U.S. Constitution’s 14th Amendment, which guarantees all people equal protection of the laws.

In combination with state and federal statute and court rulings, this usually covers any discrimination on the basis of “race, religion, ancestry and national origin, which are words that commonly fit within the definition of ethnicity,” Scaringi said.

Such indistinct meaning will leave it up to the courts, said Scaringi, and “we do not want to be ruled by courts. We do not want courts creating law. The people through their elected representatives should make the law.” As such, he planned to vote no and was advising others to do the same.

But Jerry Dickinson, a constitutional law professor at the University of Pittsburgh, said in an email that there is nothing unique about Pennsylvania’s ballot question to expand and add a specific state constitutional protection.

“States are free to provide greater protections to classes of persons in its constitution or through legislative enactments,” he said, adding: “In fact, it is a core feature of federalism.”

Dickinson also said it was common for the courts to be charged with interpretation when new laws leave out definitions, particularly on matters such as discrimination protections.

“Where a constitutional provision or legislative enactment is silent as to a definition, it is typically the judiciary … that plays a crucial role in interpreting the extent of civil rights,” he said.

That’s what happened when Pennsylvania passed a constitutional amendment 50 years ago that guarantees equal rights for all regardless of their sex.

Passed amid the national women’s rights movement in the 1970’s, it was quickly put to use. Women challenged gendered language across the board, from family law to volunteer fire departments to schooling, said Women’s Law Project attorney Terry Fromson.

Among the amendments biggest wins was ending sex discrimination in Philadelphia’s public high schools. At the time, Central High School was all boys, and female students went to a separate Girls’ High School.

But a challenge under Pennsylvania’s equal rights amendment found that the “the girls’ school did not compare by any stretch to the programs and benefits that Central provided,” Fromson told the Capital-Star. Female students were then allowed into Central.

While the impact of that amendment was broad, Dan Urevick-Acklesburg, an attorney with the Public Interest Law Center in Philadelphia, didn’t expect as far reaching an impact if the racial discrimination amendment passed.

The state’s high courts have already folded the federal protections on race into how it interprets state statute. But that shouldn’t preclude support.

He also said that the amendment’s passage would have “no measurable impact” on the Public Interest Law Center’s lawsuit to reform state education funding.

The amendment itself was sponsored by state Sen. Vincent Hughes, D-Philadelphia, who added it into the emergency powers restrictions in a June 2020 floor vote amid widespread Black Lives Matter Protests. It passed unanimously.

Since then, floor votes on the proposal, linked to the limitations on gubernatorial power, have passed mostly along party lines.

Overall, the opposition appears small and confined to social media. Instead, most conservative messaging has either been silent on the amendment, or attempted to link support for all three together.

The Commonwealth Foundation, a free market think-tank that’s part of the Koch-supported State Policy Network, sent out mailers to an unknown number of Pennsylvanians calling on them to vote in favor of all three questions. 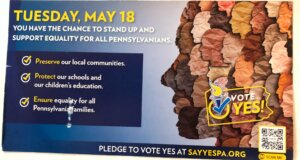 The mailer argues such votes would “preserve our local communities, “protect our schools and our children’s education,” and “ensure equality for all Pennsylvania families.”

Michael Torres, spokesperson for the foundation, argued in an email that Wolf’s shutdown orders had disproportionately hurt Black and brown workers, matching a national trend during the pandemic.

“We encourage all voters to vote yes on all 3 constitutional amendments to ensure our livelihoods and our unalienable rights are protected from harmful and discriminatory actions by government,” he added.

The administration has responded that the governor’s current disaster powers allow for a quick and flexible response to emergencies, and allow for federal disaster aid to flow into the state.

In a statement Wednesday, the state chapter of the National Association for the Advancement of Colored People, agreed with Wolf. The group said its official positions were to vote against the two measures restricting the governor’s powers, and for the non-discrimination amendment.

If anything, the pandemic has clearly indicated the value of the Governor as chief executive officer to have the authority to act quickly in making certain emergency decisions, as per the current Pennsylvania Constitution statutes,” the organization said.

All registered Pennsylvania voters may vote on the four referendums on May 18.

What you need to know about the 2021 Pa. primary ballot questions

The Voting Rights Act is hanging by a thread; Fla. ruling… by Special To The Capital-Star April 13, 2022
Pa. ranks 23rd nationwide for its LGBTQ business climate,… by Frank Pizzoli September 12, 2022
Post-Roe, what's the fate of marriage equality in Pa.? |… by Frank Pizzoli July 24, 2022