Donate to Bill McSwain’s state-level political action committee once, and if you’re not careful, you could end up donating to him for months to come.

The former Philadelphia-area federal prosecutor set up a PAC, Freedom PA, in March ahead of the 2022 gubernatorial primary, according to the Philadelphia Inquirer. Such an organization can accept political donations and raise McSwain’s profile if he attempts a statewide run.

The committee, its website states, believes that “the best path forward for a vibrant and healthy state is the simple, undeniable notion that freedom must be the essential building block of our society.”

If a viewer finds this pitch appealing, they can give McSwain their money. Suggested donations on the website range from $25 to $250. 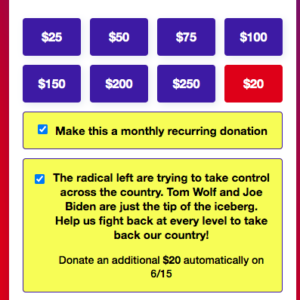 But already checked beneath the chosen donation are two buttons. One will make the donation a monthly recurrence.

Another pre-checked box states “the radical left are trying to take control across the country. Tom Wolf and Joe Biden are just the tip of the iceberg. Help us fight back at every level to take back our country!”

Keeping that box checked authorizes the campaign to take an additional $20 donation on June 15.

In an email, Peter Towey, a spokesperson for Freedom PA, said that the PAC is in “constant communication with our supporters.”

“We are confident that they understand the urgency of the fight we’re in to ensure we do not continue to have our freedoms trampled on as Tom Wolf has done for the past seven years,” Towey added.

Former President Donald Trump’s campaign frequently used these pre-checked boxes to raise tens of millions of dollars from unknowing donors, according to the New York Times.

In early May, the Federal Election Commission, which oversees federal election spending, unanimously suggested that Congress move to ban the use of pre-checked boxes. U.S. Sen, Amy Klobuchar, D-Minn., introduced such legislation later that month.

Peter Quist, a campaign finance expert with the Center for Responsive Politics, noted that the use of a pre-checked box is hard to track, but seems likely to become increasingly common as campaigns seek to leverage advances in digital fundraising.

And in a state such as Pennsylvania, which has no campaign finance limits, there is no legal risk to candidates or donors to lock in as many donations as possible.

“Sometimes with new practices, if they are effective, then we will see a few actors begin, and then the practices become common regardless of party affiliation,” Quist said in an email.

Donation pages for five other announced GOP candidates for Pennsylvania governor do not automatically sign up donors for recurring donations. And three of those hopefuls criticized McSwain for using the pre-checked boxes.

“It’s a predatory practice, and one that Jason would support legislation to end,” said Jim Christiana, chair of the Beaver County GOP and a former state lawmaker. “The more honest and transparent approach is to let supporters make a voluntary choice to show their support. [McSwain’s] campaign will have to answer why they took the approach that they did.”

Another candidate, Montgomery County Commissioner Joe Gale, said in an email that McSwain as a former federal prosecutor “should know better than to pull an unethical scam like luring donors into a recurring donation trap that can go unnoticed for months, if not years.”

“However, I am not surprised,” Gale added. “This deceitful maneuver is a swamp tactic and he’s a swamp creature. That’s why I call him Bill ‘McSwamp.’”

A spokesperson for Nche Zama, a Poconos surgeon and GOP hopeful, added in a statement that Zama “arrived in America with $20 dollars in his pocket, so he knows how valuable money is to people and families.”

“Just like we do, supporters get really upset when they are signed-up for recurring contributions and didn’t know it,” the spokesperson added in an email.

Two other candidates — former congressman Lou Barletta and Erie County restaurant owner Jason Monn — did not reply to a request for comment.

While early, a February poll from Susquehanna Polling and Research found that 60 percent of Pennsylvania Republicans did not know McSwain, the highest percentage of five potential candidates.

Pennsylvania Democrats also critiqued McSwain’s fundraising strategies in a statement, and compared it to his use of taxpayer money to put up $75,000 worth of billboards featuring his face, and paid for with taxpayer money.

Now, said Democratic spokesperson Brendan Welch in a statement, McSwain is “trying to pull another scam by tricking his supporters into recurring donations. It’s just more proof that he does not care about the hard-earned paychecks of everyday Pennsylvanians and would happily exploit them with shady political tactics, just like Donald Trump.”

Special Report: Dozens of members of Congress are… by Laura Olson March 30, 2021
Despite their millions, GOP hopefuls Dr. Oz, White… by Stephen Caruso December 2, 2021
An unchecked box could result in unintentional… by Marley Parish June 18, 2021