The state House of Representatives returns to voting session at 1 p.m. on this 13th day of January for what looks like a busy week of floor action on bills that will, among other things, repeal old state regulations and fight human trafficking, according to Majority Leader Bryan Cutler’s office. The Senate is off this week, and doesn’t return to session until Jan. 27.

So with matters legislative out of the way, we’ll focus the rest of our attention on Washington this Monday morning and a pair of new reports that remind us that, while national polling remains instructive, it’s the ground-level data from battleground states that really tells the tale.

We’ll start with a Jan. 10 report from Axios, that found swing voters in a key Pennsylvania county standing with the Trump White House on its decision to assassinate a senior Iranian military commander.

The focus group was convened in Wilkes-Barre, the county seat of Luzerne County, which flipped from Democratic blue to Republican red in 2016, sparking a cottage industry of books, think pieces, cable news specials, and, yes … focus groups.

According to Axios, this group of swing voters said that while they support Trump’s decision to launch an airstrike that killed Iranian general Qasem Soleimani, they’d question the president’s wisdom and handling of national security if it led to an all-out war (One important caveat, the focus group convened by Engagious/FPG aired its views before the Iranian missile attack that downed a Ukrainian airliner, killing all aboard.).

“This small group of voters in a key state told us that national security issues are even more important to their 2020 vote than the economy, presenting a potential dilemma for Trump if the conflict doesn’t end with Iran’s retaliatory strikes.

” … What they’re saying: “I respect his decision. He’s our president. He knows more than we know and you just have to trust that it’s in the best interest of us people to do something like that,” said 51-year-old Ron B.

Others felt that the president has been held back from doing what he really wants to do, and this was an example of him taking charge.

Yes, but: Some in the group signaled this issue could make them lose faith in President Trump. “It’s time that we take care of home and stop getting ourselves involved in these other situations that we don’t need to be in,” said 72-year-old Don E.:  “I’m supportive of his actions if his people had advised him that that was the thing to do, but that’s a question mark. How many more wars are we going to go through?” he asked.”

Another caveat: While the opinions of this small group of voters in an influential state is informative and important, it may not necessarily be determinative, or even reflective of Pennsylvania as a whole.

A clear majority (56 percent) of respondents to a nationwide ABC News/Ipsos poll released Sunday said they disapproved of Trump’s handling of the Iranian crisis, compared to 43 percent who approved.

“Overall attitudes about Trump and the consequences of his actions against Iran largely were driven by independents, a critical target for both parties in electoral politics. The poll showed a majority of Independents, 57 percent, and all adult [respondents], 56 percent, disapproving of Trump’s handling of the situation with Iran, with 43 percent of both independents and adult [respondents] approving,” ABC News reported on Sunday. 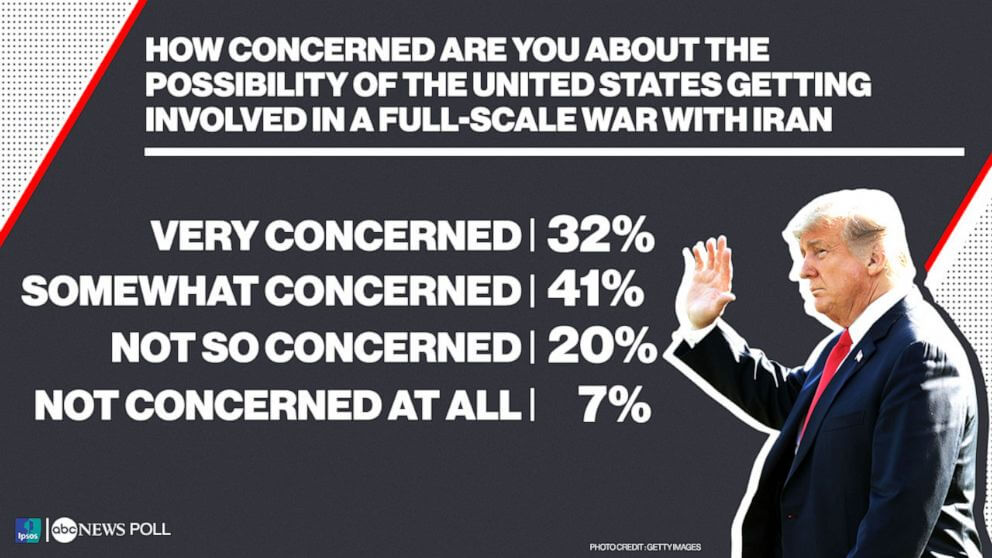 Take a look at that graphic above and then consider the comments from Don E. of that Luzerne County focus group. That’s the tightrope that Trump is walking: His supporters might be with him on a limited strike, but like the majority of Americans, they’re tired of war.

America’s wars in the Middle East have claimed the lives of hundreds of Pennsylvanians over the last two decades, and left many thousands more wounded. The prospect of another extended entanglement in the region could be enough to convince swing Keystone State voters that four more years of Trump might be too high a price to pay.

Our Stuff.
Elizabeth Hardison leads our coverage this morning with a preview of Tuesday’s special election in Lebanon County’s 48th Senate District, where voters are going to the polls to pick a replacement for Republican Mike Folmer, who resigned last year in the wake of child pornography charges.

Hardison also has what you need to know about how officials in 100 schools responded when they found elevated lead levels. The schools are mapped in this indispensable read.

In case you missed it, Stephen Caruso gets you smart, fast, on a new state law that will authorize cameras in some highway work zones.

On our Commentary Page, opinion regular Frank Pizzoli, of the Central Voice, is calling for a shift away from social media toward ‘organic’ growth for Pennsylvania’s LGBTQ community. And Dick Polman has some thoughts on what Michael Corleone could teach the Trump White House about foreign policy.

Elsewhere.
Dozens of people protested in downtown Pittsburgh over the weekend, angry about the region’s air quality, Pittsburgh City Paper reports.
State Sen. Daylin Leach, D-Montgomery, “was a #MeToo moment” for  Pa. Senate Democrats. But it won’t be easy for a pack of primary challengers to defeat him, the Inquirer reports.
PennLive asks the question we’re all asking: Will the escalator at the Pa. Capitol ever work again?
A state court will decide whether cash-paying video games in bars, VFWs and elsewhere are legal, the AP reports (via the Morning Call).

WHYY-FM asks whether Philly voters can sway the opinions of Iowa caucus-goers with a postcard campaign.
State lawmakers are taking another run at taking the politics out of redistricting, WITF-FM reports. The past record is not encouraging.
The liberal super PAC American Bridge is targeting the Senate re-elects of Republicans Tom Killion, of Delaware County, and Dan Laughlin, of Erie,  PoliticsPA reports.
Thanks to an influx of new residents, the political topography in Texas and the South is changing, Stateline.org reports.
Roll Call looks at the week ahead on Capitol Hill as the debate over war powers continues and impeachment heads to the Senate.

You Say It’s Your Birthday Dept.
Have a birthday you’d like noted in this space? Hit us on [email protected].

Monday’s Gratuitous Hockey Link.
Pittsburgh bested the Coyotes 4-3 in a shoot-out on Sunday.