In honor of Women’s History Month and the centennial of the 19th Amendment this year, the Capital-Star decided to follow up with the many women running for public office across the state.

Each week, look for a short Q&A with these women and learn a bit more about them and why they are running for office.

This week we talk to Tara Shakespeare, a Democrat running for the state’s 88th House District in Cumberland County. The seat is currently held by Republican incumbent Sheryl Delozier. Shakespeare is the only challenger Delozier faces for the seat.

Q: What made you decide to run for office?

SHAKESPEARE:  “Honestly, there are hundreds of things that led me to run for office, but one of the things was that several years ago, my husband and I were trying to get pregnant. I was successful in becoming pregnant, and unfortunately, lost the pregnancy. So, my doctor gave me the choice to terminate in the hospital, via surgery, or go home and terminate. I had already had several surprise medical bills, prior to that, related to trying to conceive and I couldn’t imagine opening up a medical bill from terminating at the hospital and having it be a $2,000 charge on top of the absolute grief I was experiencing. The thought of it was just entirely too much, so I chose to terminate at home with my dog and my husband, in the privacy of my own home, in my bed.

And so, in late 2019, the state House put up the fetal remains bill. My state legislator voted for that. Sheryl Delozier is my state legislator and she voted for a bill that would force women like me to have to endure added suffering to go through a medical procedure against our will to have more unexpected medical bills and then burial remains and expenses.

I thought about how absolutely vulnerable I was during that time, during that loss for myself and my husband and my family. And I can’t imagine if my doctor or my state legislator would have demanded that I go through surgery that I didn’t want to do and go through and all these other steps.

You know, deciding to run for office is a really personal choice, that people make for themselves because it’s hard and it’s scary, but I decided to run for office for myself and for women like me because we shouldn’t have to be beholden to the whims of our state legislators – they’re not our doctors.  They shouldn’t get to force us to endure more traumatic suffering on top of traumatic suffering on top of surprise medical bills. That’s unacceptable to me.

I mean, I have family who have experienced medical conditions, and again the surprise billing is just unacceptable.

Several years ago, I lost one of my best friends to suicide. She had a job, she had great health insurance. Unfortunately, she lost her job and with it her health insurance. She lost the ability to go see a doctor and she was unable to afford antidepressants and therapy.

Q: What has the process of running for public office been like?

SHAKESPEARE: “The process of running for public office has been exciting. I’m a person who got politically active a few years back and I didn’t fully understand or appreciate all of the moving parts that make up our government. Not just our state Legislature but our government as a whole, including local and county governments all the way up to the federal government

It’s been really exciting. I think that talking to voters and potential voters about what’s important to them has been, by far, my favorite part. Everyone has a story, everyone has a thing that they care about, and to me, that’s been my focus since deciding to run for office.

There are logistical items that go along with running for office that are not glamorous, they are not fun and it’s been really challenging because I work full-time and I’m juggling that, and I’m juggling seeing my family and running for office. But when I talk to somebody who is concerned about their 8-year-old daughter and if that daughter is going to have a healthy environment to live in 30 years – everything is worth it because that’s who we have to be fighting for.”

Q: What hurdles do women running for office face?

SHAKESPEARE: “There’s been a huge upsurge in the last few years just with the state of our national politics. It’s kind of motivated a lot of people in state and local politics, women especially. For me, my own particular challenges in running for office as a woman is that a lot of times there’s this stigma that we can’t be assertive and that we can’t fight for the rights of other women and other people without being mean.

So, I believe in equality and fighting for equality and doing what we have to do to help Pennsylvanians, but I am also a nice person. I think that a lot of times that gets lost in the shuffle because people think that politics has to be nitty and gritty. I just don’t think it has to be that way. I think we can fight for equality and be polite, but we can demand equal treatment.”


Q: If you’re elected, what are your key goals?

SHAKESPEARE: “I have several key goals. Health care is a huge important thing that we need to address. And I don’t have all the answers. I wish I did. But if I did, we would still need the majority of the Legislature to agree with me in order to make that happen. But I really think that we need some truth in billing in Pennsylvania and as legislators, we have to demand that for Pennsylvanians.

There’s actually a House bill now that discusses that. So folks like me, who go through these awful medical experiences – a month later we aren’t surprised by a $2,000 bill. So we can compare costs and we can compare prescription drug prices to know I can choose the generic or whatever other options there might be.

So, doing as much as possible about healthcare and reducing those costs is a huge priority for me.

Another huge priority for me is – right now, one in every four days in Pennsylvania is a bad air quality day. And what that means, for people like my friend who has asthma, it means that she doesn’t want to go outside. Pennsylvania is an amazingly beautiful state, but we are polluting it in a way that is very harmful to Pennsylvanians. And I would love to see legislation passed that would help protect Pennsylvanians.

And the third thing that I think is a priority is engaging with our population. What I mean by that is that right now, we have state legislators who are not interested in constituent services. They’re not interested in educating constituents about all of the different things that are available for them and I really want to change that.

Our Legislature has so much potential to be out in the community interacting with people that isn’t just beneficial to them politically, but where they’re actually, legitimately engaging with the electorate and helping to educate people on what’s available to them and interacting and getting feedback on goals and what they want their legislators to achieve. I think communication is a big part of moving Pennsylvania forward.”

Q: What have you learned since starting your campaign?

When I was deciding to run for office, I was talking to a friend about my decision and I said, ‘I’m afraid. I’m afraid to run. It’s scary, I don’t have a political background, I have a small business background.’ And so, this friend that I was discussing this with, he said, ‘So what if you just do it anyway? What if you are okay with being afraid and not having all of the answers and you just do it anyway because our will to do better and to be better has to overcome the feelings of fear.’

Q: 2020 is the 100th anniversary of the 19th amendment, granting women the right to vote. What does it mean to you to be a female candidate for office a century later?

SHAKESPEARE: “It is the 100th anniversary for women’s suffrage. I think it’s important that we remember that it’s white women. White women got the right to vote 100 years ago. But so many people got left behind and a lot of Black women didn’t have that right, and didn’t have that access until the mid-60s with the Voting Rights Act. So, what this means for me to be a candidate, at this time, is just a profound sense of connection to all of the women who have gone before me.

I have goosebumps thinking about it because change has not happened for women and people of color  and for other marginalized people by everyone sitting around being really comfortable.

Change has come when people have forced it.

Changes come when we’ve gotten a little uncomfortable, and it’s not the most fun thing in the world, to be uncomfortable, but  I’m here for it. I’m here because I think we all need to push as hard as we can, as much as we can in order to get equality so that the people who are otherwise marginalized have a voice in our Legislature and in our government as a whole, and I think that is profound and important.

We’re still not equal. I would be remiss if I didn’t say that as of right now, in Pennsylvania we have no protection for LGBTQ communities. You can be fired or evicted for being a trans person. So while we all have the right to vote, there’s still mass inequalities in our system that need to be addressed.

SHAKESPEARE: “For any other women who are interested in seeking any other public office, just do it. I have met so many women, at so many events that are both political and non-political and when I meet them, I ask, ‘have you ever thought about running?’ The amount of women who say, ‘yes, but …’ is astounding.

I just met a woman at a book signing a couple of weeks ago, and I asked, ‘Have you ever thought about running?’ And she said, ‘Yes, but I’m afraid.’ And I said, ‘Oh, well, that’s okay. I am too, and I’m doing it anyway.’ And it circled back to the same conversation I had when I was trying to decide if I was going to run. We do it anyway for the good of other people, even if it’s out of our comfort zone. And so, my absolute advice is just to run.” 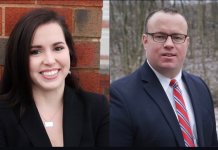