A powerful state board ruled on Tuesday that charter management companies, the private entities that primarily operate charter schools in southeastern Pennsylvania, don’t have the same rights as their charter school clients to challenge decisions by locally elected school boards.

The decision that the six-member Charter Appeals Board handed down at its monthly meeting in Harrisburg was a victory for the Philadelphia public schools, which sought to quash an appeal from ASPIRA Inc, Pa., a management company running two imperiled charter schools in the city.

The vote may prevent other management companies, some of which operate for profit, from deploying their resources on behalf of taxpayer-funded charter schools to help them secure appeals.

The case landed before the panel after the Philadelphia Board of Education voted in October to revoke charters from Olney Charter High School and John B. Stetson Charter School, the ASPIRA-run schools, and put them back under district control.

The decision came three years after the Philadelphia district initially decided not to renew the schools’ charters based on academic and financial issues, the Philadelphia Inquirer reported.

Officials from Olney and Stetson quickly sought a reversal from the state appeals board, which was created by Pennsylvania’s charter school law in 1996 to act as a neutral arbiter between districts and charter schools.

But ASPIRA filed its own, separate appeal challenging the Philadelphia school board’s decision — a move that district lawyers said was illegal under Pennsylvania’s charter school law.

Allison Petersen, an attorney representing the Philadelphia school district, said the law draws a clear distinction between charter schools and companies such as ASPIRA.

While management companies may help a charter school operate, the school is the sole holders of its charter — the agreement with a public school system that allows it to enroll their students and receive district money.

As a result, Petersen said, charter schools have the sole authority to appear before the state appeals board when their charters are in jeopardy.

“Charter school law is very clear that appeals can only be filed by charter schools,” Petersen said. “Allowing a management company to file its own appeal … opens up a Pandora’s box for [this board] that could cause a lot of problems.”

An attorney for ASPIRA said the company should have a seat at the table as the district navigates the lengthy non-renewal process over Olney and Stetson’s charters.

He also said that ASPIRA has helped the schools improve their academic performance.

“These are schools for the community to finally be proud of,” attorney John Stapleton said. “But now the district decides to go after ASPIRA.”

In the end, the board voted 5-0, with one recusal, to side with the Philadelphia district.

Since the appeals board operates as a quasi-judicial entity, the decision sets a precedent for future cases. That means that any charter management company that brings an appeal before the board will likely be met with the same rejection.

But given the vagaries of Pennsylvania’s charter school law, it’s hard to tell how far-reaching the consequences will be, one official said.

Eric Levis, a spokesman for the Department of Education, said Tuesday that “there’s no easy way to tell” how many management companies are running charter schools in Pennsylvania.

Nor Levis could immediately confirm how many non-profit management companies are clients of larger, for-profit operators, as is the case with ASPIRA.

The non-profit ASPIRA is a client of OmniVest, a for-profit educational management and technology company based in Newtown, Pa.

According to OmniVest’s website, the firm has secured $10 million in tax-free funding for ASPIRA. It provides additional services, such as “back-office support,” fiscal planning, federal programs management, and grant writing, to other Philadelphia-based charter schools.

The appeals board also ruled on Tuesday not to expedite the appeal brought by Olney and Stetson Charter Schools.

Philadelphia district lawyers sought the accelerated timeline so that the district could minimize disruptions for students and their families if the schools transfer back to district control.

But lawyers for the charter schools said the district had moved at a “glacial pace” to close the schools and should not secure special treatment from the appeals board.

Only one member of the Charter Appeals Board attended Tuesday’s meeting in person. It’s typical for board members to attend the monthly sessions via conference call.

The powerful appeals board has come under fire in the last year from education advocacy groups, who say Gov. Tom Wolf and the Republican-controlled state Senate have jeopardized its legitimacy by failing to appoint new members and fill a long-standing vacant seat.

The five appointed members of the charter appeals board were nominated by Gov. Tom Corbett, Wolf’s charter-friendly predecessor. All are serving expired terms.

Julie Cook, the only board member who was physically present for Tuesday’s meeting, declined to comment to a reporter after the meeting concluded.

When Cook was asked if she wanted Wolf and the Senate to confirm new appointees, she said only, “we all do.”

Pennsylvania got $104M from the feds to expand internet access to students. Much of it is still unspent 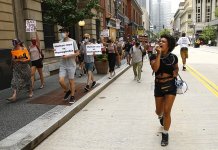 Why does it look like PGH cops are arresting as many BLM protesters as possible?