WASHINGTON — President Donald Trump implored Congress Tuesday to move past political gridlock in favor of bipartisan cooperation before he dug in in on the border security fight that threatens to shut down the government yet again.

“We can make our communities safer, our families stronger, our culture richer, our faith deeper, and our middle class bigger and more prosperous than ever before,” Trump said during his State of the Union address to a joint session of Congress.

“But we must reject the politics of revenge, resistance, and retribution — and embrace the boundless potential of cooperation, compromise, and the common good.”

But while Trump opened his remarks to the now-divided Congress with a call for a new era of unity, he showed little willingness to compromise on some of his positions — including his stance on a border wall — that were central to the last shutdown and threaten to shutter federal agencies if lawmakers can’t reach a compromise by their Feb. 15 deadline.

Democrats in Pennsylvania weren’t impressed. They accused Trump of repeating rhetoric he’s used in the past and exacerbating the partisan divide that led to the longest shutdown in U.S. history.

“The President should have pledged tonight no more shutdowns’ and committed to taking additional steps to help the 820,000 federal employees recover from the adverse impact of his government shutdown,” U.S. Sen. Bob Casey, D-Pa., said in a statement. “He also missed an opportunity to speak to America’s middle class families who are struggling to make ends meet. He could have committed to a substantial tax cut for those families. He could have talked to working parents about a comprehensive agenda for their children – investing in education, safeguarding their healthcare, rebuilding their schools and protecting them from violence. Unfortunately, he used his platform tonight to reinforce the same talking points and to double down on his corporate agenda.”

Freshman U.S. Rep. Madeleine Dean, D-4th District, took note of Trump’s assertion that “if there is going to be peace and legislation, there cannot be war and investigation,” saying that, “In the United States, no one is above the law – and transparency strengthens our democracy.”
U.S. Rep. Susan Wild, D-7th District, credited Trump for trying to strike a bipartisan tone. But, she said, she was “hoping to hear a commitment from him to work with Congress to avoid another shutdown.
“The last shutdown did nothing but harm our country, stress our federal workforce, Coast Guard members and their families, risk our national security, and hurt our economy,” Wild said. “We all agree that border security is a priority and if the president is serious about bipartisanship he will work with us – Democrats and Republicans – to create rational, long-term immigration reform that secures our border with commonsense and cost effective measures, without holding the government and the American people hostage.”
In Trump’s first address to Congress since Democrats clinched control of the House in the November elections, he called on lawmakers to choose “greatness” over “gridlock.” The speech, originally slated for late last month, was delayed as Trump sparred with House Speaker Nancy Pelosi, D-Calif., over the 35-day shutdown that ended in late January.

“Republicans and Democrats must join forces again to confront an urgent national crisis,” Trump said.“The Congress has 10 days left to pass a bill that will fund our Government, protect our homeland, and secure our southern border.”

Despite congressional Democrats’ insistence that they won’t provide the $5 billion in funding for a wall along the southern U.S. border, Trump doesn’t appear to be budging.

“In the past, most of the people in this room voted for a wall — but the proper wall never got built. I will get it built,” he said. “This is a smart, strategic, see-through steel barrier — not just a simple concrete wall.”

In an apparent effort to rally support for his position, much of Trump’s speech was dedicated to warning about the “tremendous onslaught” of immigrants entering the country.

“As we speak, large, organized caravans are on the march to the United States,” he said. “We have just heard that Mexican cities, in order to remove the illegal immigrants from their communities, are getting trucks and buses to bring them up to our country in areas where there is little border protection.”

The deep ideological divisions in the Congress were evident during Trump’s speech. Republicans frequently stood and applauded loudly, while Democrats — including many women dressed in white to honor women’s suffrage — sat quietly through many of Trump’s more contentious remarks.

Trump told Congress that “America is winning each and every day,” and that “the state of the union is strong,” prompting chants of “U-S-A” from Republicans. “That sounds so, so good,” the president said.

Trump touted a host of his administration’s policies that have drawn ire from the left. He pointed to the rollback of federal rules and declared that his team has “unleashed a revolution in American energy,” becoming the world’s top producer of oil and natural gas.

He also boasted the massive tax overhaul bill he signed into law and his move to eliminate what he called “the very unpopular Obamacare individual mandate penalty.”

As House Democrats prepare to kick off a spate of investigations into the Trump administration, Trump issued words of caution.

“An economic miracle is taking place in the United States — and the only thing that can stop it are foolish wars, politics, or ridiculous partisan investigations,” he said. “If there is going to be peace and legislation, there cannot be war and investigation.  It just doesn’t work that way.”

The president issued new calls for issues where even a divided Congress could in theory muster bipartisan support, like efforts to rebuild infrastructure, lowering the cost of healthcare and protecting patients with pre-existing conditions and fighting childhood cancer. Still, it’s unlikely that Democrats in either chamber will have much of an appetite to work with Republicans on major legislation as the 2020 presidential race nears.

“President Trump also made a reasonable case for enhancing security at our southern border,” U.S. Sen. Pat Toomey, R-Pa., said. “The obvious, necessary solution to our budget impasse is a compromise that improves border security – including physical barriers where requested by Customs and Border Protection – and delivers on some Democrat priorities, too. I hope Speaker Pelosi will come to the table and finally negotiate in good faith.”

“I’m hopeful that Congress will come together in a spirit of cooperation on these issues for the benefit of the American People. The results of the President’s agenda are clear: the economy is booming,” he said. “We added 304,000 jobs in January; pay and benefits rise at fastest pace in 10 years, and U.S. Stocks Post Best January in 30 Years. The reason we can address other issues is because the economy is so strong; it’s important not to lose sight of that progress. The best is yet to come and I’m looking forward to getting back to work.”

Trump won raucous bipartisan applause when he mentioned that women were filling the bulk of the country’s newly created jobs last year, as many Democrats turned to applaud the many women who arrived on Capitol Hill this year.

“You weren’t supposed to do that,” he said of the boisterous applause from the Democratic side of the aisle. He noted, “We also have more women serving in the Congress than at any time before.” In a departure from his prepared remarks, and after the Democrats chanted, “U-S-A,” Trump said, “Congratulations, that’s great.” 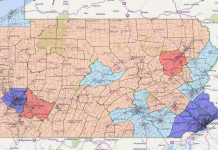 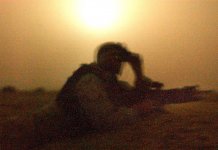 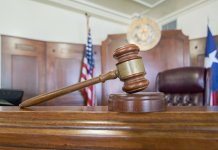 Dems ahead in ChesCo as Lawrence goes red at primary deadline...

American service members are patriots not props. Politicians forget that at...