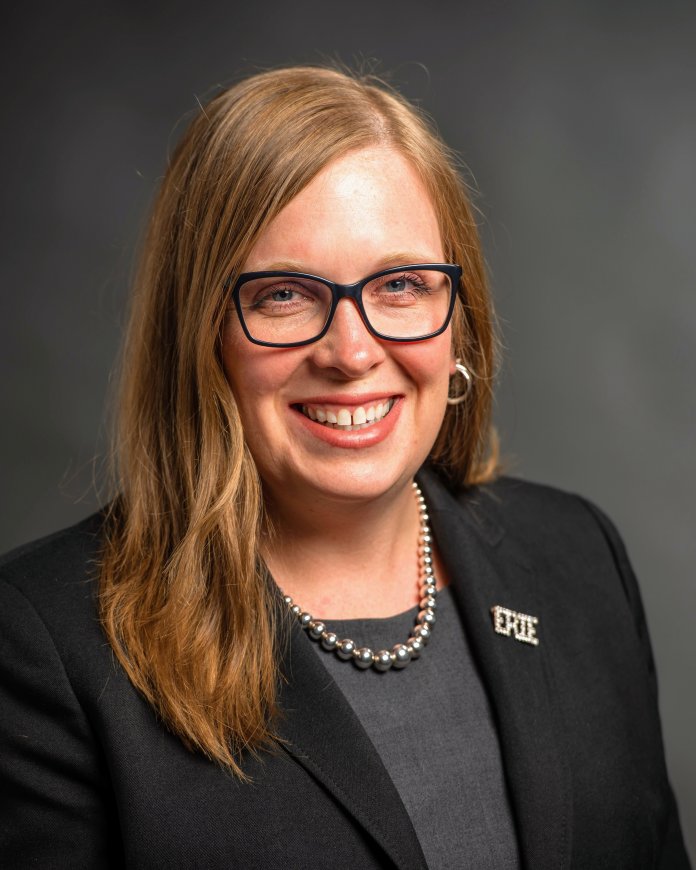 In honor of Women’s History Month and the centennial of the 19th Amendment this year, the Capital-Star decided to follow up with the many women running for public office across the state.

Each week, look for a short Q&A with these women and learn a bit more about them and why they are running for office.

This week, we talk to Julie Slomski, a Democrat running for state Senate in Erie County’s 49th Senate District. Slomski and fellow Democrat Andre Horton are vying for the right to challenge Republican incumbent Sen. Daniel Laughlin. Laughlin has held the seat since 2016.

Q: What made you decide to run for office?

SLOMSKI: “Well, for me, it came down to knowing the challenges that face our community. Folks that I’ve talked to talked about the frustration – people working long hours at jobs that don’t pay enough to feed the family, pay the bills, pay for college. One thing that bothers me, and I’ve heard this a few times talking to voters – single moms that are working two or three jobs to barely make ends meet and missing their children grow up, saying this is why we need family leave, this is why we need to increase the minimum wage.

It’s folks like that that inspired me. Folks saying, ‘What do i do? Do I fill my gas tank or do I fill my prescription?’ and the fear that they are one medical emergency away from financial ruin.

I talked to another constituent. She just started her job and was 10 days away from receiving her insurance. And unfortunately, she was in an accident. She was clearly injured and uninsured at the time, she said, ‘I learned a lesson. It really strung me out financially.’

That’s what frustrates me, and that’s why I am running. I am running to be able to focus on Erie and what we really need in the 49th [District], what we truly deserve. It’s sad that, in a way, that’s not the focus. Yes, we need to increase the minimum wage. Yes, we need affordable healthcare, and yes, we need to bring these jobs back.

In addition to that, we haven’t had a female member of our state Democratic delegation since 2006. Representative Linda Bebko-Jones was the last member. It’s kind of funny, because it’s something we pride ourselves on — being a strong Democratic community here — which we are to an extent. But the last one was 2006, so we’re obviously long overdue and I’m running to give women more representation in government, as well.

We have a female county executive, female city council members, and we’re long overdue to have a Democrat on the state side.”

Q: Tell us about the issues affecting Senate District 49?

SLOMSKI: “It’s the majority of Erie County except for the southern point, but the city of Erie, and rural parts of the county, as well. We look at ourselves as having a strong sense of community and as Rust Belt reliable. We’re lucky to receive some significant investments in our downtown. But talking to voters that I’ve talked to so far, in the outskirts of the county kind of feel forgotten in a way. That’s kind of where I was inspired in a way and also just to help fix it.

Are we suffering? Yes. Are other great regions suffering? Absolutely. But for us, there’s the strong sense of community, and diverse community, as well. Folks call it the “melting pot.” We have folks from all over. We still have our old Polish and Italian neighborhoods and we have a strong bonding community here with refugees from Bhutan, coming to our region as well and finding that it’s a great place to come and start over, so to speak.

But again, folks feel that we’re just forgotten when it comes to the basics that we need. We need more minimum wage increases and we need access to healthcare. Education, for us, is something we’ve made some strides in, but we need to find a way to reinvest.

I know there are similar issues throughout the commonwealth, but for us here, people say we’re part of the rust belt. Okay, fine, but we’re on a revival, but we also need the tools to help us get through that whole revival period.

Q: How is running for state Senate different from your previous governmental roles?

SLOMSKI: “It’s different. It’s challenging for me, personally, to be able to learn that I’m not a [House] staffer anymore and that I’m actually a candidate. I love to be in the weeds, I love the policy side of things and i love digging down into solving constituent issues, so it’s been a challenge for me to have that separation in a way.

In all honesty, it’s part of what inspired me to run for this position. I worked for Rep. [Ryan Bizarro, D-Erie] for his campaign in 2012 and then jumped into working as his chief of staff in 2014, and then in 2015, [Gov.  Tom] Wolf asked me to become his northwest regional director, so that’s where I was really able to learn more about the concerns here in Erie.

I had my own ideas, it was eye-opening, really, for me as to what’s really our concerns. I was able to stay based here in Erie and stay focused on building those relationships with the local, state and federal representatives on both sides of the aisle.

We had some major investments in the Erie courts, revitalizing our Warner Theatre and the recovery of the Erie School District.

So, to me, it’s challenging how it is to be a candidate and not a staffer, but that’s really what helped and inspired me to run for office.

I guess it’s kind of funny because I have a couple of friends who have said, ‘It’ a wake up – it’s Thanksgiving dinner and you’ve been at the little kids table a long time. It’s your time to go to the big kids table – you’re ready for it.’ And it was that push that helped get me there.”

Q: What hurdles do women running for office face?

SLOMSKI: “I realized that I struggle with something that others struggle with as well and that’s talking about myself and my accomplishments and qualifications.

I was lucky to pair up with Emily’s List and Emerge PA. We’re lucky to have both organizations in the commonwealth to guide you every step of the way. I also have strong women on my team that are there to assist me that have been through this and understand the trials and tribulations, but If it wasn’t for Emily’s list and Emerge, I think women would still struggle. They’re there to help us over each and every one of those hurdles.

There’s webinars constantly, there’s e-blasts with suggestions – we’re lucky. We’re so lucky to have these resources during these challenging times.”

If you’re not like me, and don’t have folks to help you make the decision or guide you, I’m happy to be a person to talk to. I love having conversations with women just out or at an event that say, ‘wait, you’re Julie? You’re running? How is it so far? Is it scary?’ It’s scary, but I sure hope it’s going to be rewarding.

Q: 2020 is the 100th anniversary of the 19th amendment, granting women the right to vote. What does it mean to you to be a female candidate for office a century later?

SLOMSKI: “‘It’s exciting. It adds to the inspiration, knowing that leaders 100 years ago gave it their all to pave the way for us. We owe it to them to work as hard as they did to win these races and that’s what I think it really comes down to.”

‘I really believe that this is a big year for women,’ says veteran staffer running for Erie Senate seat | 2020 Women Speak Up