Good Thursday Morning, Fellow Seekers.
We are, generally, firm believers in the long-standing admonition that there is no such thing as an off-year election — merely elections where there are a plethora of critically important offices on the ballot and local voters are likely to know more about the contestants on The Voice than they are about who’s running for borough council.

This is partly a function of the hollowing-out of local media (mea culpa, mea maxima culpa) and the designs of local party chieftains who are banking on an uninformed electorate reflexively reelecting people based on their names or ballot position.

Social media has gone some distance to remedy this. But unless you’re really engaged (like the erudite and well-informed audience of this newsletter), you’re likely just casting darts in the dark.

Fortunately, we have veteran political sages Terry Madonna and Mike Young to put it all in perspective in a new op-Ed sent to a number of Pennsylvania news outlets — including this one.

First up, a few numbers:
Pennsylvania, with north of 12 million residents, has 67 counties and 2,561 municipalities; 500 school districts and 1,500 local authorities that have taxing power of their own, Madonna and Young note. But take heart, Texas and Illinois have even more … and you know how things go in Illinois.

“These local entities provide some of the most critical functions performed by government, including local police and fire protection, setting municipal and school property tax assessments, local road and street maintenance and garbage collection, among many other responsibilities,” they observed.

In addition to these local races, there are a handful of legislative special elections and one congressional special election on the ballot this May 21. And don’t forget the statewide judicial races, where you’ll be asked to “nominate six individuals to the Court of Common Pleas from the 25 candidates that qualified for the ballot.”

So what’s that mean?
In what has to be the understatement of the month, Madonna and Young say that “when voters head to the primary polls this year they will confront a bewildering welter of possible candidate choices for a wide variety of offices,” they observed.

“It’s not uncommon for voters to be asked to choose from 20 to 30 candidates seeking nomination to a dozen or so offices, some obscure, but many critical to the operations of local government,” Madonna and Young concluded.

And, yes, turnout will be lousy:
“Primary turnout in most areas doesn’t exceed 20 percent of the electorate – and of that dismal number, perhaps a quarter of voters will have some knowledge about who is seeking these posts or will reasonably understand the functions performed by the officeholders,” they noted. “Voters still get left holding the short straw in this game, explaining in part why so few even participate in primary elections.”

So who’s fault is this anyway, you leftist rag?
While it’s true that the “electorate is sometimes criticized for not being informed’, Madonna and Young argue that “the reality is this complicated system makes it virtually impossible for voters to unravel their choices – a task compounded by asking them to vote for offices that in many cases should be appointed rather than elected.”

So how to fix it?
Merit selection for judges, anyone?

“Appointing statewide appellate judges through some sort of merit system would be a good first step to resolving the voter overload imposed by the existing system,” they observed. “Alas, it is also an option Pennsylvania has repeatedly rejected, making the state now one of only eight that elect all judges in partisan elections.”

But why stop at judges?  There’s no reason “voters be asked to make electoral judgements about county row offices, such as prothonotary, clerk of courts or register of wills,” for instance, Madonna and Young suggested..

That’s because “These are clearly administrative functions best carried out by those chosen for their administrative abilities. And there are other potential offices among the many dozens’ voters are asked to fill that might better be filled by appointment,” Madonna and Young noted.

And before you go thinking that such a system is small-d undemocratic or elitist, Madonna and Young argued that the “present system is elitist. It produces a process which cynically manipulates voters, camouflaging it with the illusion that voters are making meaningful and informed decisions.

“Substituting a transparent appointment-based system would allow voters to actually focus on electoral choices that really matter, help restore accountability to local government, and nudge the state further into the 21st century,” they argued.

Our Stuff:
After a pretty rough week, Republican and Democratic leaders in the state House made a rare call for civility on Wednesday. Stephen Caruso has the story.

Washington Bureau Chief Robin Bravender caught up with Pennsylvania’s members of the U.S. House Judiciary Committee after the panel voted to hold Attorney General William Barr in contempt on Wednesday.

Gov. Tom Wolf’s DEP boss won a second term endorsement from a key state Senate panel on Wednesday, but it wasn’t without some moments of drama, Elizabeth Hardison reports.

On our Commentary Page, University of Pittsburgh legal scholar Philip Hackney explains why the IRS won’t cough up President Donald Trump’s tax returns – even though it’s required by law to do so.

From the right, Colin McNickle of the Allegheny Institute has a few suggestions to stem Pittsburgh’s population loss. Unions won’t like them.

And a highway expert has a plan to replenish a key budget account that’s supposed to pay for highway construction — without raising taxes.

Elsewhere.
The Inquirer has the details of Joe Biden’s campaign stop in Philly this weekend.
Harrisburg tops the state in teacher turnover – five ex-teachers tell their stories to PennLive.
Gov. Tom Wolf gave hefty raises to some senior staffers, PennLive also reports.
Uber and Lyft drivers in Pittsburgh boycotted during a global strike Wednesday, The Post-Gazette reports.
The Morning Call explains why there’s a night and day difference between the budgets for the Allentown and Bethlehem schools.

Andy, you started the investigation, and you pulled the building down on your own head.

Here’s your #Harrisburg Instagram of the Day (Totally not looking for an endorsement deal — maybe):

It is PRIME cold jar drinking weather. But then again — when is it not?! 📸: @briheriganart #littleampscoffeeroasters #harrisburg

What Goes On (Nakedly Political Edition).
House Majority Leader Bryan Cutler, R-Lancaster, holds a 5:30 p.m. reception at the Bellevue Hotel in Philadelphia tonight. Admission runs from a merely offensive $5,000 to a truly nauseating $25,000. But this is not new territory for him.

Heavy Rotation.
Here’s some new music from former True West leader Russ Tolman, whose new solo record ‘Goodbye El Dorado,‘ is one of our favorite records of the past few weeks. This is the lead track, “Los Angeles.” 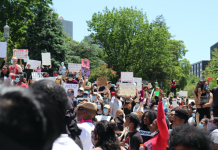 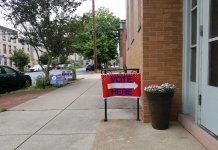 Live Coverage: The latest on the 2020 Pennsylvania primary election

How Pa. college and university students are raising their voices in protest