Survivors of clerical sexual abuse rally at the state Capitol on Monday, 5/24/21, calling for passage of legislation that would create a two-year window allowing them to sue in civil court (Capital-Star photo by John L. Micek).

(*This story was updated at 11:24 a.m. on Tuesday, 5/25/21 to clarify the role of Attorney General Josh Shapiro’s office and its interactions with Senate Majority Leader Kim Ward’s staff)

Cindy Leech’s voice broke, then it broke again, as she talked about the lives ruined, and the lives lost, to childhood sexual abuse — including her son’s.

“We’re not going away. We are going to fight,” Leech, of Johnstown, her husband at her side, said, as she and other survivors of childhood sexual abuse by clergy and others called on the No. 2 Republican in the state Senate to finally hold a vote on a long-sought bill opening a two-year window in civil court allowing them to sue in cases where the statute of limitations has expired.

Legislation authorizing such a change cleared the Republican-controlled state House in April on a 149-52 vote, but the legislation remains in park in the majority-GOP state Senate, where Senate Majority Leader Kim Ward, R-Westmoreland, has said such a bill is unconstitutional.

Ward, whose office controls the flow of legislation to the floor, said her caucus will only pursue the reform as a constitutional amendment — a process that can take years, the Capital-Star previously reported.

An amendment had been on track for a likely vote on the May 18 primary ballot until it was revealed that the Department of State had missed a key legal advertising deadline, scuttling the proposal, and resetting the clock. Under Pennsylvania’s constitution, proposed amendments must be approved in consecutive legislative sessions and then by the voters at a statewide referendum.

With initial votes by the House and Senate, the earliest that could now happen is 2023. The delay has enraged survivors and their advocates, many of whom have waited decades to pursue their claims.

In an email, a spokesperson for Ward said the GOP leader’s position remained the same.

Victims and elected officials “have a common goal. I also understand and acknowledge the victims are frustrated with the timeline,” Ward’s spokesperson, Erica Clayton-Wright, told the Capital-Star. ” … we thought this matter was resolved with bipartisan support in previous sessions with a constitutional amendment until the Department of State incident. Since that time, we have expanded victims’ rights and set a path for the constitutional amendment restart.”

*Approving the two-year window in legislative form “has the potential to open it for all other issues,” Clayton-Wright said, adding that Ward has asked Attorney General Josh Shapiro’s office to “provide us with case law and guidance on this matter.”

In an email, a spokesperson for Shapiro said there had been “several meeting between our office and the leader’s office and staff,” and that a “memo from [Shapiro’s] office with further guidance on this was shared with leaders and staff earlier this year.” 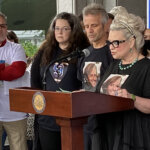 Cindy & Bernie Leech of Johnstown, Pa. speak at a Capitol rally on Monday 5/24/21 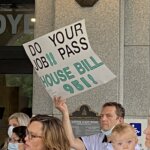 Survivors of clerical sexual abuse rally at the state Capitol on Monday, 5/24/21, calling for passage of legislation that would create a two-year window allowing them to sue in civil court (Capital-Star photo by John L. Micek). 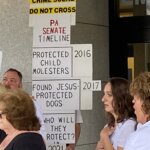 A sign at a rally calling for the state Senate to vote on a long-delayed bill granting clergy sexual abuse survivors an expanded right to sue in civil court. 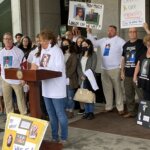 A sign at a rally calling for the state Senate to vote on a long-delayed bill granting clergy sexual abuse survivors an expanded right to sue in civil court.

On Monday, survivors and their advocates made it clear that they’d had enough. They called on Ward to put the bill to a vote and to take their chances with a potential constitutional challenge — a risk potentially facing every other piece of legislation the 253-member institution passes and sends to the governor for his signature.

By failing to act, lawmakers are re-victimizing survivors, said Diana Vojtasek, who said she endured years of abuse by a priest at her Catholic high school in Reading. She accused Ward of being “complicit in the shielding of pedophiles,” by not bringing the bill to the Senate floor for a vote.

Clayton-Wright said her boss wasn’t stalling, and noted that the Senate GOP leader plans to meet with survivors this week.

“Don’t ask me to wait any longer,” she said.

A reflection on Charles Dickens and the history and meaning… by David DeWitt December 24, 2022
Thirteen men died after going to the Allegheny County Jail.… by Special To The Capital-Star March 15, 2022
Trump’s fake electors: Here’s the full list by Kira Lerner June 29, 2022