A meme shared to Doug Mastriano’s campaign Facebook page. The image was among those that emerged after the Notre Dame fire in Paris to suggest it was an act of terrorism.

Ed Note: This story was updated on May 6 with new information about Mastriano’s personal Facebook page. A previous version of this article also misspelled the name of Sarah Hammond, Mastriano’s Democratic challenger in the 33rd district race.

A decorated military veteran who’s running to represent parts of south-central Pennsylvania in the state Senate has shared a stream of conspiracy theories and Islamophobic memes and articles on his campaign’s Facebook page.

The posts are mixed among standard conservative calls for tax cuts, regulatory reform, and infrastructure spending that Republican nominee Douglas Mastriano has shared with more than 27,000 Facebook followers as he looks to succeed ex-Sen. Richard Alloway in the state Senate.

Mastriano, a retired Army colonel, military historian, and former congressional candidate, is favored to beat Democratic candidate Sarah Hammond in a May 21 special election to represent the 33rd senatorial district, which includes Adams County and parts of York, Franklin, and Cumberland counties.

He did not return the Capital-Star’s requests for comment for this story. By late Sunday, some of those images appeared to have been removed.

Hammond denounced Mastriano’s posts on her own Facebook page on April 30, saying he “is actively using his platform to support gross misinformation.” The state Democratic Party also condemned them in a May 2 fundraising email.

One of the memes that Mastriano shared in the past month shows two dark-skinned men, apparently snickering as they watched the Notre Dame cathedral burn in Paris on April 15.

According to the fact-checking website Politifact, the image was among those that circulated in the wake of the fire to suggest that it had been an act by Muslim terrorists.

French authorities have said that the fire was an accident, and not the result of arson or terrorism.

One expert told PolitiFact that the image Mastriano shared had been doctored.

RT, the English-language Russian news site that circulated the image, maintained its veracity but condemned those who used it to “speculate about the religious beliefs of these two men based on their appearance only.” 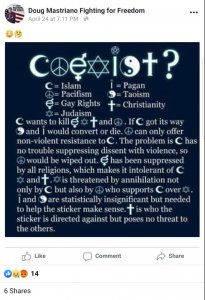 Another meme Mastriano shared used pictographic symbols to say that “Islam wants to kill” other identity groups, including Christians, Jews, LGBTQ supporters, and pacifists. In April 2018, he shared an article headlined, “A Dangerous Trend: Muslims running for office.”

On May 1, he shared an article from the site Voice of Europe, a right-wing news blog, that claimed “Nationalist Christian Hungary [is] thriving” with low abortion rates and high birthrates. 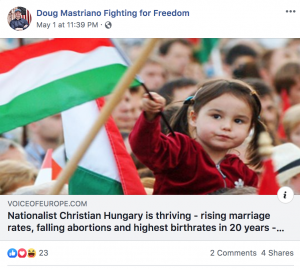 One invoked a debunked conspiracy that links the congresswoman’s activism to an attempted murder at the Mall of America.

Mastriano’s other Omar-related posts generated dozens — and in some cases hundreds — of vitriolic comments from some of his 27,000 followers.

In one meme that criticized a statement Omar made about Jesus and Palestine, a commenter called the Muslim congresswoman “a foot soldier of satan.” Another commenter said, “Why is Omar still living. Traitors of America and our constitution should be made dead.” 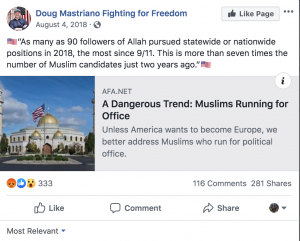 Facebook allows page “administrators” to delete comments that appear on their public posts. On May 3, Mastriano’s personal account was listed as the administrator for the campaign page.

As of May 6, Mastriano’s personal Facebook account did not appear in public searches and was not linked to his campaign page.

Mastriano was chosen as the GOP candidate for the 33rd special election in March, in a vote by Republican party conferees from Franklin, Adams, Cumberland, and York counties.

“Doug Mastriano is the kind of conservative candidate that reflects the values of south-central Pennsylvania and will be a key asset in helping advance the Republican agenda in Harrisburg,” state GOP chair Chair Val DiGiorgio said in a March 30 statement.

DiGiorgio did not return requests to comment on this story. Messages to the Senate Republican Campaign Committee also went unanswered.

Robert Ternes, chair of the Franklin County Republican Party, said he wasn’t aware of Mastriano’s Facebook posts. But he said Mastriano was an “excellent candidate” who was prepared to serve all constituents in the 33rd district.

Ternes said that Mastriano’s views on Islam were likely informed by his time in the armed forces, where he said the former general had “a tremendous amount of personal contact with the Taliban and Arabs.”

He also said Mastriano was right to question the cause of the Notre Dame fire.

“I think it is personally reasonable for some people to wonder if that could have been a terrorist act,” Ternes said, noting that France has seen a spate of church vandalism in recent years. “I don’t think there’s anything inappropriate about raising the question.”

Rep. Greg Rothman, who chairs the Cumberland County GOP committee, declined to comment on Mastriano’s Facebook posts Friday, saying he had not seen Mastriano’s page or met him in person.

But Rothman, whose legislative district and native Cumberland County is home to a growing South-Asian and Muslim population, said that Mastriano should delete any comments on his Facebook page that called for violence. He also said that politicians from both parties should practice civility.

“Everyone should be treated with respect and dignity and civility,” Rothman said. “I don’t condone everything that is tearing down anyone else.”

by Elizabeth Hardison, Pennsylvania Capital-Star
May 6, 2019