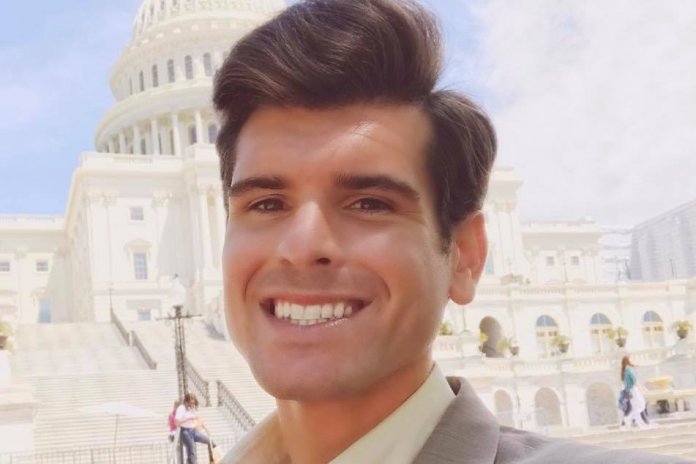 [*This piece has been updated to clarify the timing of the Capital-Star’s interview with Bobby Jeffries and the timing of our reaching out to Democratic hopeful Tom Brier for comment on an allegation made in the course of the interview below.]

Bobby Jeffries says he sees U.S. Rep. Scott Perry as the embodiment of a bygone era in the Republican party, one more focused on special interests than on working people — one that won’t work to build President Donald Trump’s GOP.

Earlier this summer, the 28-year-old Hershey resident announced he planned to challenge Perry, a four-term incumbent, for the Republican nomination to central Pennsylvania’s 10th Congressional District.

His entrance to the race means there are intra-party challenges on both sides of the aisle. State Auditor General Eugene DePasquale and Tom Brier, a Hershey attorney, are both vying for the Democratic nomination.

The Capital-Star talked with both Brier and DePasquale over the summer, and plans to speak to all of the candidates in the 10th ahead of the 2020 primary.

The interview below has been edited for clarity and brevity.

Capital-Star: Why are you running for Congress?

Bobby Jeffries: I believe that America’s future is big, bold, and very bright. But we can’t look back through the trash heap of history for failed solutions, and expect those solutions to propel us forward. And this is on both sides. We can’t be looking back.

Especially in my party, we need energy to match the radical socialism that is going on in this country. I don’t want to see my generation, with all the potential that we have, to fall to radical socialism.

I don’t believe that Scott Perry is up to the task. He does not have the energy. He … [seems like] he doesn’t want to even engage with his constituents.

You know, I think he’s a great guy. And I respect his military service. But his time in the United States House of Representatives has not really demonstrated that he is fighting for the people of Pennsylvania’s 10th Congressional District.

Q: What do you think, if any, would be the big policy differences between yourself and Perry?

Jeffries: I am a Trump supporter. I was an early Trump supporter. I’ve supported the president ever since he came down the escalator in Trump Tower … in 2015. Trump represented something different than the status quo. And that’s why so many people got on board the “Trump train.” It was just something so different from what we’ve experienced over the last 30 years of American politics.

I don’t think Representative Perry has the president’s back. He wants no part of the president. If you look back through the first two years while Trump was in office, Perry ranked 13th out of the 14 Pennsylvania [Republican] congressmen who voted with the president.

[Editor’s note: The rankings match data journalism website FiveThirytEight’s Trump Score, which measures how frequently members of Congress vote with the administration’s position on legislation. In the 2017-18 session, Perry’s score was 85.3 percent among congressional Republicans. Only U.S. Rep. Brian Fitzpatrick’s, R-1st District, score, at 84.4 percent, was lower. Perry’s average this session is 95.2 percent.]

Q: What is your vision for the future of the Republican Party?

For our generation, I just look at us all as Americans. Even bigger than that, I look at us all as human beings. I think that so many of these career politicians still hanging out in the Republican Party, they are very choosy. Whether [Republican politicians are] saying it’s the party of the country club, whether they’re keeping people in the LGBT community out, whether they’re denying climate change. They’re just doing these things and not appealing to the issues that affect our generation.

And I want to take the Republican Party in a direction that’s moving this country forward. I just want people to see that, you know, freedom and liberty and justice under the law is still the way forward for the American people.

Q: Are you saying that, if elected, you would support a bill that would ban LGBT discrimination? What would make the party more open to LGBT members?

Jeffries: Well, I’ve seen some of the bills kind of going that way, and I’m not really a fan. I think that what we have already accomplished with the LGBT community … I have family members. My best friend, a guy who works for my campaign, is a gay guy.

Q: How can the Republican Party move forward on climate change?

The goal is to have energy that’s cheap, so people can live their lives, go to work, study, and achieve their dreams and become the best versions of themselves. They don’t want to be burdened by high energy costs. It’s like adding another tax.

With the Green New Deal, it’s basically putting all of this power in the federal government and completely taking away the power of private industry, which I would argue would be a better motivator, through a competition, to achieve cheap energy prices.

I will support something like [Republican Florida U.S. Rep.] Matt Gatez’s Green Real Deal, which works with private companies. It works with all of the people who want to make money and they want to invest in new things that people are obviously going to want to consume in a free market.

Q: Both yourself and Tom Brier, on the Democratic side, are millennial candidates. Both of you brought up climate change, without me having to bring it up. He was backing, the way he put it, a green Marshall Plan. You were focusing on, how do we empower private industry.

Jeffries: Well, it’s not like we have to do it. We don’t have to do anything. But would it be good to do so, to have more energy industries in the United States and for new people to have jobs and to have wealth.

We don’t have a [Franklin Delano Roosevelt] situation. It seems like that’s what the Democratic Party wants to do. Somebody like Tom Brier, he praised [U.S. Rep. Alexandria Ocasio-Cortez, D-N.Y.], who’s a radical socialist. He praised her.

[Ocasio-Cortez] recently was just trying to bail out all of these radical, antifa members. She tried to bail them out of law enforcement in Boston. I guess there was a straight pride parade.

So I want this in the article, and I want it on the record right now, that unless Tom Brier denounces antifa and [Ocasio-Cortez] and her radical socialism, then he is a radical socialist and he is an anti-Semite and he is a supporter of domestic terrorist groups.

[*Editor’s Note: In Brier’s interview with the Capital-Star, Brier said he believes Ocasio-Cortez “is doing the job” of bringing climate change to the “forefront of our political discourse.” In a Sept. 11 statement to the Capital-Star, Brier said, “At a time when we should be honoring those who lost their lives on September 11th, Bobby Jeffries is calling people who disagree with him ‘terrorists.’ It’s disgraceful and unworthy of a response.” The interview with Jeffries was conducted on Sept. 6.]

Q: Couldn’t somebody do the same to you with a Trump syllogism? You support Trump, Trump has called African nations “shithole countries,” you are therefore racist.

Jeffries: There’s nothing racist about that. I’m not talking for Donald Trump.