PITTSBURGH — State Rep. Austin Davis, D-Allegheny, has stepped down as chairman of Allegheny County’s Democratic Committee and thrown his support to two candidates the county party passed on endorsing two weeks ago.

“I believe in the Democratic Party and the people that make up the party! It has become clear that I cannot best serve the party and its people as the vice-chairman of the ACDC. Please Accept this letter as my official resignation as vice-chairman of the ACDC, effective immediately,” Davis wrote in a letter the county Chairwoman Eileen Kelly that was first reported by WESA-FM in Pittsburgh. “I will always be committed to the values of the Democratic Party and I will work tirelessly to support and elect people who support those values. However, I can not remain in this position under your leadership.”

BREAKING: State Rep. @RepDavis35 Austin Davis, who has been serving as the vice-chair for the Allegheny County Democratic Committee, says he has resigned from that post, due to long-standing differences with chair Eileen Kelly over the party's direction. https://t.co/M1jsaqxWRM

Despite growing unrest, Kelly has so far refused calls for her to step down made by such western Pennsylvania political figures as U.S. Rep. Mike Doyle, D-18th District, and state Sen. Lindsey Williams, D-Allegheny.

The issues surrounding the party began in mid-January when Heather Kass, a little-known South Hills Democrat was hand-picked by Readshaw to run for his seat.

However, hours after the endorsement, the Pittsburgh Current found several Facebook posts from Kass that not only supported Trump but also called people on public assistance “lazy idiots,” and said addicts needed to “OD” so there would be “less s**t in the world.”

The party endorsed Kass, angering many in the party, not just those considered progressive. But under party bylaws, ACDC committee members were expected to support the endorsed candidate without fail, however, many quickly defected to Benham, including Davis. Last week, Kelly doubled down her support for Kass.

But this isn’t the only issue to rise out of the Feb. 16 endorsement process. The county committee notably passed on endorsing Lee, the first Black woman from the region to be elected to the state House.

In a statement released Monday, Lee touted “a surge in donations and a growing list of new support from labor unions, community organizations, and elected officials.”

The statement also noted that Lee had secured the backing of the Working Families Party, which was “providing strategic support to her race. She has received a surge of grassroots contributions. To date, she has raised $108,176 for her reelection, with an average donation of $83.45.” 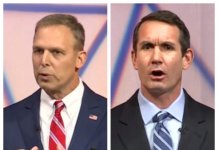