“The Trump Administration is revoking California’s Federal Waiver on emissions in order to produce far less expensive cars for the consumer, while at the same time making the cars substantially SAFER,” Trump wrote on Twitter.

The Trump Administration is revoking California’s Federal Waiver on emissions in order to produce far less expensive cars for the consumer, while at the same time making the cars substantially SAFER. This will lead to more production because of this pricing and safety……

California is allowed to seek waivers under the Clean Air Act to set its own air pollution standards for cars and trucks.

Environmental activists in Pennsylvania, one of 13 states potentially impacted by the administration’s announcement, pounced on the news, saying it was “unlawful” and would have “far-reaching negative consequences” for the Keystone State.

Rob Altenburg, of the environmental advocacy group PennFuture, said in a statement that his group was calling on Democratic Gov. Tom Wolf and state Attorney General Josh Shapiro “to take all measures at their disposal to oppose the EPA’s action and fight for the health and safety of the Commonwealth’s citizens.”

The announcement comes as Trump’s White House moves to weaken greenhouse gas emission standards for cars that were also put in place during the the Obama era. Both moves are certain to face legal challenges.

“Bizarrely, the Trump team is barreling ahead to revoke California’s ability to set emission standards — over the objections of the automakers themselves, who see themselves caught in multi-car pile-up in the nation’s courts,” David Doniger of the Natural Resources Defense Council said in a statement. “This will not end well, for the car makers or the administration.”

In 2006, Pennsylvania chose to adopt California’s stricter standards because they “were necessary to meet air quality requirements and protect public health,” PennFuture said in its statement.

“By taking this action, [Trump] will force our citizens to pay the price of dirtier cars and dirtier air. Adding newer — potentially less cost-effective — regulations may limit some of the damage, but until we can replace fossil fuel vehicles with cleaner alternatives there is no substitute for limiting how much cars can pollute,” the statement reads.

*In a statement, Elizabeth Rementer, a spokeswoman for the state Department of Environmental Protection, said Trump’s action against California will not “affect Pennsylvania’s program to control ozone and particle pollution, which will remain in place. Cars and light-duty trucks sold or leased in Pennsylvania will still require California certification. ”

But, the White House’s “continued efforts to dismantle critical environmental regulations will have both immediate and long-term detrimental impacts on our environment and increase costs for consumers. The Wolf administration has made it a priority to address climate change, most notably through DEP’s Climate Action Plan and Restore Pennsylvania,” Rementer said.

Several major automakers reached a deal with California earlier this year to increase fuel efficiency beyond the Trump administration’s proposal.

Blocking California from enacting tougher rules would have broad impacts throughout the country. Thirteen other states, including Pennsylvania, and the District of Columbia follow California’s tougher standards.

California Attorney General Xavier Becerra, a Democrat, wrote on Twitter, “The Trump Administration is preparing to announce its desperate plan to rob our state of its long-standing authority to set vehicle emissions standards. To those who claim to support states’ rights: don’t trample on ours.”

More details about the administration’s plans are expected to be unveiled Thursday when Wheeler and Transportation Secretary Elaine Chao have said they’ll make a policy announcement at EPA headquarters in Washington.

In a statement, Environmental Defense Fund President Fred Krupp said the White House’s move would exact an economic toll, pointing to an administration analysis concluding it would cost 60,000 U.S. jobs by 2023.

“Everyone wins when we adopt strong clean car standards as our public policy. Strong clean car standards give us healthier air to breathe, help protect us from the urgent threat of climate change, and save Americans hundreds of dollars a year in gas expenses,” Krupp said. “Clean cars reduce our dependence on imported oil, bolster our national security, and help protect Americans from global crude oil price spikes. Clean cars drive the technological innovation that leads to economic prosperity and job growth.”

This developing story will be updated. 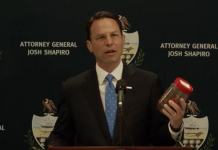