Forty percent of Pennsylvania’s 227 bird species, including such easily recognizable birds as the pine warbler, the red-headed woodpecker, and the American black duck, are under threat from climate change, but it’s not too late to change course.

That’s the main finding of a new report by the National Audubon Society that paints a dire picture of the future health of hundreds of North American bird species as they stare down the threat of global climate change.

“Extreme spring heat is the greatest concern. But the good news is that we can make a difference, for birds and ourselves, by restoring and protecting forests and watersheds, planting native plants, and promoting clean energy,” Greg Goldman, the executive director of Audubon PA, said in an email.

The report concludes that a “rapidly changing climate could lead to population declines and local extinctions if species are not able to adapt.”

Additionally, “the reshuffling of bird communities at the continental scale will bring together species that previously lived in isolation, leading to novel, unpredictable interactions. Disruptions in food and nesting resources further compound vulnerabilities to climate change,” researchers said.

“Birds are important indicator species, because if an ecosystem is broken for birds, it is or soon will be for people too,” Audubon’s senior climate scientist, Brooke Bateman, said in an email. “When I was a child, my grandmother introduced me to the common loons that lived on the lake at my grandparent’s home in northern Wisconsin. Those loons are what drive my work today and I can’t imagine them leaving the U.S. entirely in summer but that’s what we’re facing if trends continue.”

“We already know what we need to do to reduce global warming, and we already have a lot of the tools we need to take those steps. Now, what we need are more people committed to making sure those solutions are put into practice,” Renee Stone, Audubon’s vice president for climate, said in an email. “Our elected officials at every level of government must hear from their constituents that this is a priority. Audubon is committed to protecting the places birds need now and in the future and taking action to address the root causes of climate change.” 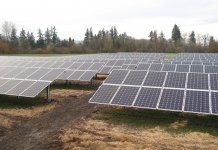