Correction: An earlier version of this article misstated the projects financed by the grant money.

The state grant money, totaling more than $936,000, is expected to finance 16 additional fast charger installations across the commonwealth.

DEP also announced efforts to draft rule-making “to make electric vehicles more readily available to consumers” and the release of a booklet outlining the basics and benefits of zero-emission vehicles (ZEVs).

“DEP is committed to supporting this choice by increasing public knowledge of electric vehicles, making it easier for consumers to find electric models, and helping to expand charging infrastructure,” DEP Secretary Patrick McDonnell said in a statement Friday.

The announcement of the new initiatives comes as Pennsylvania was ranked 17th among states on an overall EV scorecard issued by the American Council for an Energy-Efficient Economy (ACEEE) earlier this month.

As of November 2020, there were more than 29,000 electric vehicles registered in Pennsylvania, according to the DEP’s Electric Vehicle Roadmap. 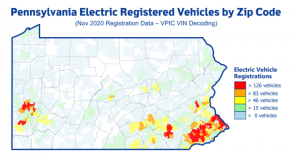 “This number is just a fraction of the total number of registered vehicles, but it’s more than twice the number of EVs registered in Pennsylvania in 2017,” DEP Deputy Communications Director Deborah Klenotic told the Capital-Star. “Interest in zero emissions vehicles is growing among Pennsylvanians.”

Transportation generates 47 percent of nitrogen oxide and 21 percent of carbon dioxide emissions in Pennsylvania, according to the DEP.

The $936,619 needed to fund the projects is coming from the DEP’s Driving PA Forward Program, a group of initiatives tasked with reducing emissions and improving air quality across the commonwealth in addition to moving Pennsylvania away from fossil fuels to cleaner technologies.

DEP awarded EVBuild, Inc. $186,619 for a project to install two fast-charging plugs in a mall parking lot at 100 N.W. End Boulevard, Quakertown Borough, Bucks County.  The project is located along high-traffic Route 309 and within four miles of Interstate 476.

Once completed, these stops will add additional stops to Pennsylvania’s growing network of highway segments known as “electric vehicle corridors,” which are being developed by DEP and the Pennsylvania Department of Transportation (PennDOT).

The initiative aims to have a fast charger every 50 miles along the corridors, which currently total 731 miles, according to the DEP.