President Donald Trump last month unveiled a massive rewrite of the regulations associated with the National Environmental Policy Act, NEPA — which is sometimes referred to as the “Magna Carta” of federal environmental laws. Trump said he wanted to fix the “regulatory nightmare” the current rules create for new projects.

But critics say the changes would strip the public of their voice on regulations and could give the industry too much leeway to plow forward with projects.

“This rule is a clear attempt to tear up, misinterpret, ignore and destroy important public health and environmental protections under [the National Environmental Policy Act] to keep corporate polluters happy,” Rep. Raúl Grijalva (D-Ariz.) chairman of the House Natural Resources Committee, told leaders of the White House Council on Environmental Quality (CEQ) at the hearing.

More than 100 people registered to share testimony in the public comments at Tuesday’s hearing. The available three-minute speaking spots were filled shortly after CEQ announced them online. Testimony in the morning session included representatives from wildlife and industry groups in Washington, lawmakers, former administration officials and concerned citizens from states like Michigan, North Carolina, and as far away as California.

The majority of comments in Tuesday morning’s session opposed the rule changes, though at least three representatives from trade groups applauded the proposal.

President Richard Nixon signed NEPA into law in 1970, following a fire on Ohio’s Cuyahoga River. NEPA requires federal agencies to conduct detailed environmental reviews when any of their actions significantly affect the environment. It comes into play for mining permits on federal lands, construction of new roads, oil and gas drilling permits and pipelines, dams, power plants and other projects.

The changes would also significantly narrow the scope of the reviews, and the government would no longer need to consider “cumulative” and “indirect” effects. In some cases, it would allow industries to fund their own reviews. The administration says the changes would help reduce paperwork and make the process more manageable.

“Agencies have limited time and resources and the scope of agencies’ inquiries must remain manageable,” Ted Boling, the associate director for NEPA at CEQ, said in explaining the rule changes at Tuesday’s hearing.

“We know what is driving this,” Christy Goldfuss, who led CEQ during the last two years of the Obama administration, said at the hearing. “The trade associations, [the Federal Energy Regulatory Commission] and others who want to lock in fossil fuel development.”

Four CEQ staff members were positioned on stage to listen to testimony, and at one point Goldfuss looked at them and said “shame on you.” Her impassioned speech received loud applause.

The White House hosted just two public comment sessions on the proposal: Tuesday’s event at the Interior Department headquarters and another listening session earlier this month in Denver.

Advocacy groups that oppose the changes created something of a spectacle at the event.

The consumer advocacy group Public Citizen parked a truck with a massive billboard criticizing Interior Secretary David Bernhardt just outside the entrance to the Interior Department. The truck blared retro horror movie music throughout the day, flashing between pictures of Bernhardt and a swamp monster. Protesters periodically stood near the truck holding signs or with tape over their mouths.

Hundreds of other environmental advocates held a rally in a nearby park during the public hearing’s lunch break.

“Our children depend on this! Our future depends on this!” Mildred McClain of Savannah, Ga., shouted to the rally before leading a call-and-response cheer.

McClain is the executive director of the Harambee House/Citizens for Environmental Justice in Savannah. She said she is speaking out for NEPA to give a voice to low-income communities that live near major projects like the Savannah River Site, a nuclear power plant.

“I travelled more than 575 miles to get here, but that is alright because I know we are going to protect NEPA,” McClain said.

NEPA requires federal officials to get input from the public, affected communities, tribal governments and landowners before undertaking a new project.

Belinda Joyner of Garysburg, N.C., traveled to Washington for the hearing because she is concerned about the effects from wood-pellet plants in her community, she said. Joyner has worked as a teacher’s aide and is an organizer for Clean Water for North Carolina.

“We are impacted because people have tried to limit us, and limit our voices, it is not about need, it is about greed, because we are the ones who suffer,” said in impassioned testimony during the hearing. 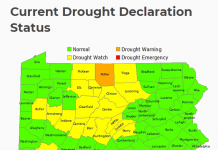