LOWER PAXTON TOWNSHIP — Capping years of effort and millions of dollars in lobbying by the energy industry, a Pennsylvania lawmaker on Monday rolled out his plan to keep the state’s nuclear power plants open.

Independent analysts expect utility companies would pass the estimated $500 million annual cost on to ratepayers, who would see an estimated increase of $1.77 per month to their electricity bills, Mehaffie said.

The bill is designed to create a new revenue source for Pennsylvania’s five nuclear power plants, which industry leaders say is necessary to keep the carbon-free energy source profitable in the long-term.

The owners of the Three Mile Island nuclear plant in Dauphin County and Beaver Valley plant in Western Pa. have said they will close by 2021 if lawmakers don’t intervene.


State Sen. Ryan Aument, a Lancaster County Republican, is expected to introduce a companion bill in the state Senate.

Nuclear energy has been Pennsylvania’s largest energy source for decades. But the industry says it’s struggling to compete with cheap, carbon-intensive energy resources, such as natural gas and coal, as energy demand declines nationwide.

Mehaffie says his bill would reward nuclear providers for the environmental and economic benefits of their energy supply.

If Pennsylvania’s lawmakers don’t pass it, he said, the state will lose jobs and pay higher energy prices in the long term.

“Nuclear power is creating reliable power 24/7, 365 days a year,” Mehaffie said during a press conference at a local Ironworkers union hall. “It’s the only baseload power supply created without carbon emissions. If our state wants to move forward with a clean environment, there is no way we can get there without our nuclear plants being open.”

While it’s been derided by critics as a “bailout,” the bill would not transfer any state funds to nuclear companies.

Instead, the cost of the program Mehaffie proposed would be borne by energy ratepayers in the form of higher electricity bills.

Under the proposal, utility providers would be required to purchase a set amount of credits from energy generators, using the funds they collect from ratepayers.

Since 2004, a similar credit program has been in place for Pennsylvania’s wind, solar, and hydropower suppliers. Mehaffie said it’s time for the nuclear industry to receive its own competitive advantage in the energy marketplace.

Mehaffie’s bill would essentially limit the sales for coal, gas, and other energy sources in Pennsylvania’s energy market. But nuclear proponents say a smaller market share is appropriate, given the high carbon emissions of those energy sources.

“We’re trying to create a carbon-free future here, and people who produce carbon would be against that,” Matt Leonard, government and regulatory affairs specialist for the Pennsylvania Rural Electric Association, said.

Mehaffie said Monday that his proposal was designed to address climate change and save an important sector in Pennsylvania’s economy.

Environmental organizations have also been vocal opponents of the nuclear bill. What Pennsylvania needs instead, they say, is a long-term commitment to cut pollution and carbon emissions to zero.

“It’s time for Pennsylvania to focus on cost-effective policies to reduce pollution and figure out what their neighbors have already: clean energy solutions can be deployed at cost savings to customers,” Andrew Williams, director of regulatory and legislative affairs at the Environmental Defense Fund, said in a statement Monday. “This is an expensive Band-Aid that saddles consumers with the majority of risk.” 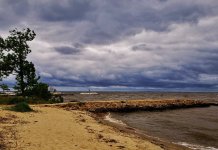