Despite the looming promise of Gov. Tom Wolf’s veto, a Pennsylvania House panel has advanced a bill loosening regulations for conventional gas drillers.

The bill sponsored by state Senate President Pro Tempore Joe Scarnati, R-Jefferson, cleared the House Environmental Resources and Energy Committee 16-9, with all Republicans, and one Democrat, voting in favor.

The proposal rolls back an eight-year-old regulatory regime for the state’s natural gas drillers, known as Act 13, that was signed into law by former GOP Gov. Tom Corbett. The law set standards for typical gas production drilling — imagine an oil derrick  — as well as unconventional drilling, or fracking.

"You say you don’t want this bill, but you’ve been taking advantage of the oil and gas industry. It is what has made this nation what it is,” Rapp says. Says thank you to the "oil and gas guys." Man, 2020 is gonna be a hoot.

Included in the law are rules for land restoration around wells, conventional and unconventional, that the state’s chief oil and gas regulator has previously praised.

Conventional drilling is a $1.2 billion industry, according to Weaver. Fracking, meanwhile, has contributed to four times that total in fees, taxes and royalties to the commonwealth’s coffers alone, according to industry group Marcellus Shale Coalition.

“We’re trying to take regulations back to 2012, where things kinda went astray,” Weaver told the Capital-Star.

If the law passed, the industry would be governed by 1980’s vintage regulations, with some adjustments to raise the threshold for reporting spills to the state.

Such a rollback “poses an undeniable risk to the health and safety of our citizens, the environment, and our public resources,” Wolf spokesperson J.J. Abbott said in an email.

For example, under the proposal advanced Monday, only spills greater than 210 gallons of drilling waste water, or five standard oil barrels, and 48 gallons of oil, or two barrels, would have to be reported — barring a risk to “downstream users of waters of the Commonwealth.”

Previously, the state has required drillers to report spills of as little as five gallons of drilling waste water, DEP Secretary Patrick McDonell told the state Senate in a letter last October.

Those new reporting standards were already a compromise. On Monday, the House panel included an amendment that assigned the new standards, and removed a provision that would allow drilling waste water to be sprayed on state dirt roads as a dust deterrent.

The practice was allowed in Pennsylvania until 2018, when the state reversed its stance.

The language was the result of negotiations between Scarnati and the industry, the panel’s chairman, Rep Daryl Metcalfe, R-Butler, said.

A 2018 Penn State University study found that the use of drilling waste water risks the run off of heavy metals into local water supplies.

“We have collectively engaged with the legislature and stakeholders over the last two years to attempt to find agreement,” he said. “However, the administration was also clear from the start that we were unwilling to undermine core environmental protection principles that are critical to protecting Pennsylvania’s water resources and residents.”

The removal of the provision also drew the praise of some state environmental groups, even if they still opposed the proposal.

It was a wild scene, but we're thrilled that we won our fight to get road-spreading of brine removed from the bill! Now time to fight the rest of #SB790. https://t.co/FWsCN1CkAL

A similar regulatory rollback passed the House in June 2018 by a vote of 111-84, with 18 moderate Republicans opposing the bill but some conservative Democrats backing it.

The bill died in the Senate at the end of the last legislative session. 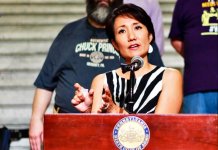