In his fiscal 2020 budget request, Trump suggested cutting federal spending for the Chesapeake Bay Program from its current level of $73 million to $7.3 million.

The answer from the activists at the Chesapeake Bay Foundation? A firm “no thanks.”

Pennsylvania is part of the 64,000-square mile Chesapeake Bay Watershed, which encompasses parts of five other states and all of Washington, D.C. More than 18 million people live within its boundaries.

The proposal is “a slap in the face to a national treasure finally beginning to recover from decades of pollution,” the group’s president, William C. Baker, said in a statement.

“If the president’s budget were to be enacted it would devastate efforts to restore local rivers, streams, and the Chesapeake Bay,” Baker continued. “The Bay Program is the glue that holds the state/federal partnership together. And it’s working. Over time, pollution is declining, the dead zone is getting smaller, and Bay grasses are increasing. But the Bay is far from saved.”

J.J. Abbott, a spokesman for Democratic Gov. Tom Wolf, said the administration “[opposes] any reduction in federal funding for the watershed.”

Despite the Trump Administration’s attempts to slash Chesapeake Bay cleanup funding, we successfully fought for another year of full funding. Good news for our economy and our environment.https://t.co/SldrMvo4eM

This isn’t the first time the Trump administration has proposed slashing the Chesapeake Bay program. During his first year in office, Trump sought to eliminate funding for the program entirely. And in 2018, he suggested cutting funding from $73 million to $7.3 million — a 90 percent reduction.

With the help of the Chesapeake Bay cleanup plan, bay grasses, a "secret garden" that nurtures virtually all wildlife, are finally thriving again. There's just one problem. Trump wants to eliminate the cleanup plan. https://t.co/djTpKgu0uG pic.twitter.com/h54Q9QvDKi

Members of Congress who support the program — including Republicans and Democrats from states along the Chesapeake Bay and in its watershed — are expected to fight to keep those funds in place, as they have in past years.

“There is much to be concerned by in the Trump Administration’s proposed budget, which is chock-full of short-sighted, draconian cuts to critical programs like medical research, education, environmental protection, transportation, and health care,” said Sen. Mark Warner, D-Va.

Trump’s $4.75 trillion budget request proposes increased spending on military programs, but recommends massive cuts to domestic programs. The Environmental Protection Agency would see its overall budget cut by about 31 percent. It suggests cuts to Medicaid and inclusion of $8.6 billion in funding for a wall along the southern U.S. border.

“Just months after inflicting a painful and costly 35-day shutdown, the president is putting our country at risk of yet another shutdown by demanding billions of dollars for an unnecessary and ineffective border wall,” Hoyer said.

“Furthermore, the president’s budget once again attacks our hardworking federal workforce by freezing their pay and threatening their retirement savings,” Hoyer continued. “The president’s proposal also seeks to repeal the Affordable Care Act and fails to invest in infrastructure, education, and workforce development, and programs to improve the health of the Chesapeake Bay.”

Pennsylvania Democratic Rep. Dwight Evans wrote on Twitter, “I’m a NO on this plan. “Trump for the first time calls for cutting $845 billion from #Medicare, the popular health care program for the elderly that in the past he had largely said he would protect.”

“I applaud the administration for prioritizing our military and veterans, education and reducing healthcare costs for American families,” said Florida Republican Sen. Rick Scott. “Additionally, the president’s focus on school safety and border security promotes a stronger and safer vision for America. 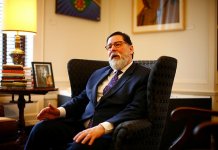