*This developing story will be updated.

The U.S. Supreme Court announced Monday that it will not take up a challenge that Pennsylvania’s Senate Republicans brought against the state’s top election official last fall, arguing that the state improperly changed voting rules ahead of the presidential election.

The decision from the nation’s high court came down among a slew of judicial orders on Monday morning.

It means that justices will not weigh in on an argument that legislative Republicans have waged for months: that the Pennsylvania Supreme Court and executive branch officials overstepped their constitutional authority ahead of the 2020 presidential election, when they gave instructions to counties implementing Pennsylvania’s new vote-by-mail law.

Along with the case from Senate Republicans, the court also declined to hear separate challenges brought by the Trump Campaign and by U.S. Rep. Mike Kelly, R-16th District, who sought to overturn the state’s vote-by-mail law, and toss 2.6 million votes.

Thomas acknowledged in an accompanying opinion that the Pennsylvania Supreme Court did not affect the outcome of the 2020 election when it ordered counties in September to accept late-arriving mail-in ballots.

But he said the U.S. Supreme Court was wasting an important opportunity to clarify the role that state courts can play in setting election procedures.

“These cases provide us with an ideal opportunity to address just what authority non-legislative officials have to set election rules, and to do so well before the next election cycle,” Thomas wrote. “The refusal to do so is inexplicable.”

The petition that Pennsylvania’s Senate Republicans filed in September asked the nation’s highest court to overturn an order that the state Supreme Court issued earlier that month, which instructed Pennsylvania counties to tabulate mail-in ballots that arrived up to three days after the Nov. 3 election.

State election law requires those ballots to be received by counties before 8 p.m. on Election Day.

Republican leaders argued that the court had overstepped its boundaries issuing the directive, since the U.S. constitution gives the Legislature sole power to set election law.

But state Supreme Court justices argued that deadlines in the state’s new vote-by-mail law were unworkable as written. They warned that voters would have their ballots disqualified if postal delays lead to a glut of late-arriving ballots.

State lawmakers said last year that they would amend the state election code ahead of the November election, but never arrived at a bipartisan compromise.

The U.S. Supreme Court said in October that it would not issue a judgment in the case before Election Day. But the justices left open the possibility of ruling on it in the future, saying that it presented important questions about the role of non-legislative officials exerting authority over state election law.

New state board kicks off ‘nuts and bolts’ review of Pa.’s election laws 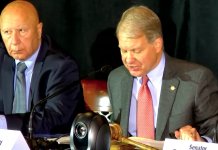