PHILADELPHIA — City officials have boosted police staffing and resources for Election Day as demonstrations are planned and unexpected agitation from outside groups remains a possibility.

On Monday officials stressed there was no intelligence of an organized effort to intimidate or suppress voters in Tuesday’s election, but noted some recent “warning signs.”

“We have seen some issues in other states and we have seen some warning signs over the last couple of days,” said District Attorney Larry Krasner during a news conference with other officials outside the Marian Anderson Recreation Center in South Philadelphia.

Roving teams of Philadelphia officers equipped with body-worn cameras will be assigned to respond to issues that arise at polling places. While declining to cite specific figures, Outlaw said a “substantial amount of officers” are available to respond to election-related and other issues.

Philadelphia voters have cast more than 400,000 mail-in ballots before the polls open at 7 a.m. on Tuesday.

The city has secured 718 polling places for the election, more than 100 fewer than the city typically has had during elections held before the pandemic. But the figure is an increase from the June primary, when approximately 188 polling places were opened.

‘Fear is a driving factor in this election’: Election experts sound alarm on possible voter intimidation

Mayor Jim Kenney expected high turnout across the city, warning voters of long lines at the polls. Counting the vast number of mail-in ballots will “easily take a few days,” he added.

Lisa Deeley, chairwoman of the Philadelphia City Commissioners, the three-person elected board charged with overseeing the city’s elections, said officials were working with police and the district attorney’s office to address any issues that arise during Election Day.

“We are aware of heightened concerns due to the pandemic and other recent events,” Deeley said.

The district attorney’s office has dedicated more than 90 attorney’s and detectives to its Election Task Force, who will be available to respond to voter intimidation and other election day issues.. The city commissioners and police are working in coordination with the task force.

Campaigning is illegal within 10 feet of a polling place. Police are required to remain at least 100 feet outside of polling places unless called upon to maintain order.

Krasner said that possessing a visible firearm near a polling place potentially could qualify as voter intimidation or “an illegal act.”

The polls close at 8 p.m. on Tuesday. But anyone in line at a polling place by that time will be allowed to vote.

President Donald Trump is competing against former Vice President Joe Biden, the Democratic nominee, in the election. In addition to statewide offices, the entire U.S. House of Representatives and all state representatives in the General Assembly are up for election, as well as state senators in odd-numbered districts.

In recent days, Trump supporters have disrupted traffic in numerous instances, including on Friday when the GOP nominee’s supporters surrounded a Biden campaign bus in Texas, which the Federal Bureau of Investigation is investigating.

Demonstrations are planned around City Hall and the Pennsylvania Convention Center on Tuesday.

Outlaw said police will work to keep different groups separate and allow for the safety around polling stations.

In addition to heightened tensions around the election, protests and civil unrest continue over the fatal police shooting of Walter Wallace Jr. last week. City officials are expected to release the police body-camera footage of the incident on Wednesday.

Many businesses in Center City and other neighborhoods have boarded up their shops, which Outlaw supported.

“I’m not discouraging folks to protect their property by boarding up windows,” Outlaw said, adding, “I think it’s proven helpful for those who have chosen to secure their windows and facilities.”

Pennsylvania is seen as a critical swing state for either Trump or Biden to win the presidency. Trump won the state in 2016 by approximately 44,000, winning Pennsylvania for the GOP for the first time since 1988.

Councilman Kenyatta Johnson, of District 1, said the “eyes of the world are looking at the city of Philadelphia” and the state to determine the outcome of the U.S. election.

The Rev. Wayne Weathers, vice president of the Black Clergy of Philadelphia and Vicinity, said African-American voters in the city were energized to cast their ballots.

Weathers said many people shunned using mail-in ballots because of mistrust of the U.S. Postal Service. He said a “good portion” committed to going to the polls on Tuesday.

“During the early voting process, we heard a lot of, Will our votes get in on time? Can we trust the process?” Weathers said. 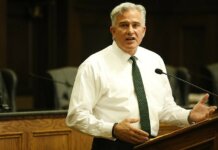